Researchers from the international PoLAR-FIT team are revealing a four-million-year-old forest beautifully preserved in permafrost and peat on Nunavut’s Ellesmere Island
By Winson Li
October 11, 2019

Crouched on the edge of a steep slope 400 metres above an icy fiord, Jarloo Kiguktak slowly whisks away bits of dirt and peat moss, pausing after each sweep of his brush to examine the sediment beneath. He’s looking for fossils. You wouldn’t know it at first glance, but almost four million years have passed since these thick mats of peat formed on a stony outcrop near the southwest end of Ellesmere Island’s Strathcona Fiord, about 250 kilometres north of the hamlet of Grise Fiord. The permafrost-preserved Arctic peat provides an unparalleled fossil preservation environment, and sites like this one have yielded a remarkable number of vertebrate species. As the peat gradually erodes, ancient flora and fauna are being revealed in bits and pieces, and snapshots of an ancient, diverse boreal forest are slowly coming into focus.

Kiguktak, a paleontology field technician and bear monitor who also happens to be the former mayor of Grise Fiord, is part of a research group studying these fossil-bearing sites, of which only a few remain in Canada’s High Arctic. Over the past three million years, repeat glaciations have eroded most of this landscape and carried it out to sea. By revisiting some of these important fossil sites and seeking new ones each short Arctic field season (typically in July), the Pliocene Landscapes and Arctic Remains-Frozen in Time (PoLAR-FIT) team — a group comprising researchers from Dalhousie, Alberta, Copenhagen and Cambridge universities, the Canadian Museum of Nature and the American Museum of Natural History — is slowly piecing together the story of the prehistoric climate and ecology of the Arctic.

Similar to expected modern climate conditions, the mid-Pliocene warm period (ca. 4.5 to 3.5 million years ago) had atmospheric carbon dioxide concentrations around 400 parts per million and global average temperatures between 2 C and 4 C warmer than our pre-industrial levels. Because of its relatively recent occurrence in geologic time, these similarities make understanding this period especially important for predicting future climate and ecosystem sensitivity. Although a 2 C increase in the global average temperature seems small, Pliocene fossil sites on Ellesmere Island show that the effects of warming are magnified in the polar regions. The result of this “polar amplification” means annual temperatures in the mid-Pliocene High Arctic were 14 C to 22 C warmer than today — warm enough to support boreal forests more than 1,000 kilometres north of any modern living trees.

Two important fossil sites, Beaver Pond and Fyles Leaf Beds, lie near the head of Strathcona Fiord. Decades of work have gone into both sites, creating a near-complete picture of a Pliocene forest consisting of almost two hundred species of plants, including 12 species of trees, and more than a dozen vertebrate species, from large carnivores such as bears to frogs and other small aquatic animals. Although these sites have been studied intensely since the early 1990s, it wasn’t until 2013 — after multiple field seasons spent collecting bone fragments of an unknown large animal — that one of the most miraculous fossil finds unveiled itself. Collagen fingerprinting at last confirmed that the fragments belonged to the High Arctic camel (a species about 30 per cent larger than modern camels), the most northerly record of a camel ever found. 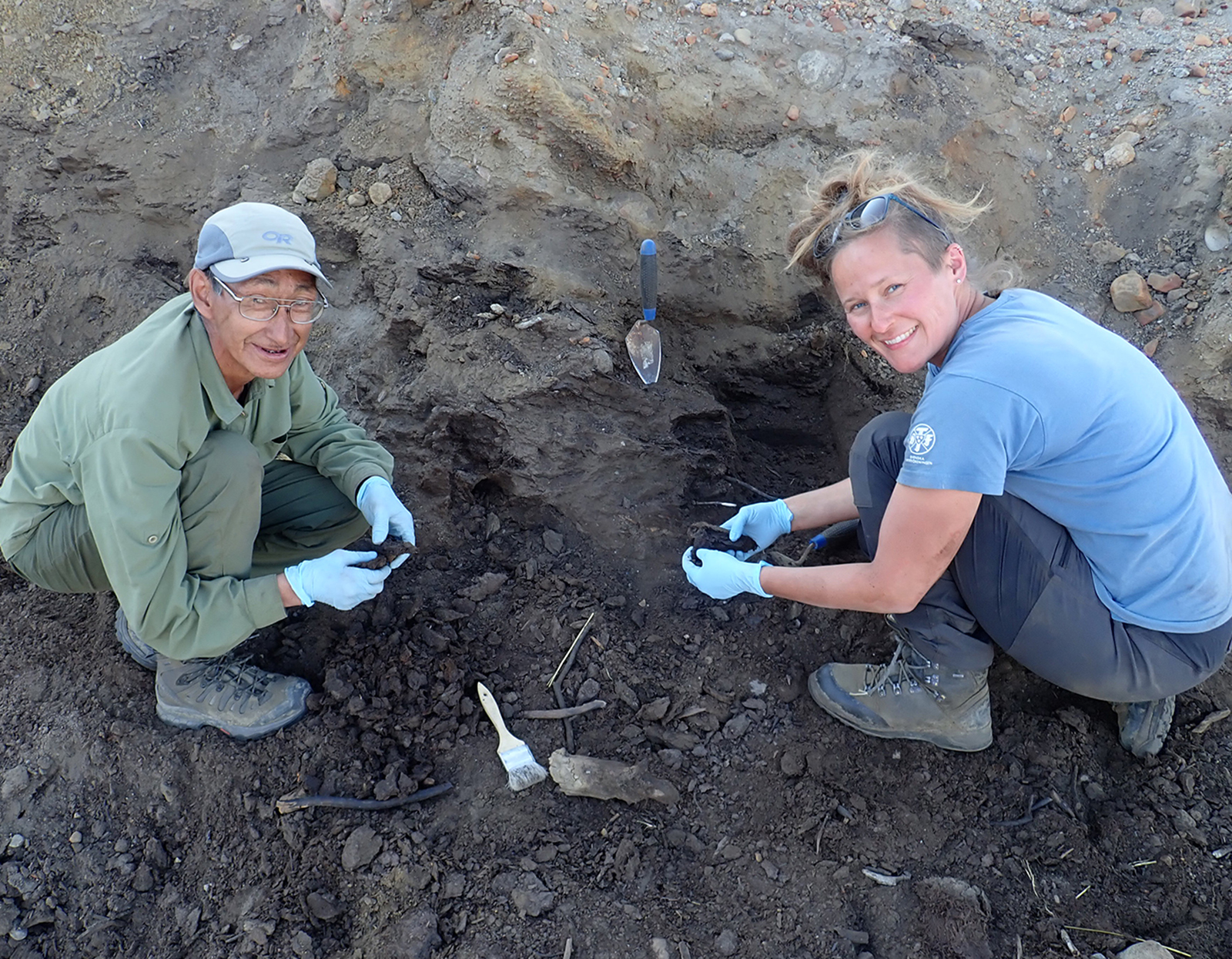 Jarloo Kiguktak and Alexandra Rouillard, of the University of Copenhagen, prospecting for fossil material in the Beaver Pond peat. (Photo: Natalia Rybczynski)

One of the main objectives of PoLAR-FIT’s 2019 expedition is to find new Pliocene fossil sites. Although Fyles Leaf Beds still has potential for paleontological work, the richest fossil site, Beaver Pond, has been largely exhausted. By aggregating information from previously published geologic work in the region, members of the team identified and visited five potential fossil sites.

From a helicopter, these locations are almost impossible to distinguish — they appear only as discontinuous bands of slightly darker dirt. And while it took boots on the ground to confirm that none of these five sites actually contained what we were looking for, a highly promising peat site with a similar structure was reinvestigated when members of the team were dropped off to collect geologic dating material. Named after its 1980s discoverer, John Fyles of the Geological Survey of Canada, “John’s Peat,” about 1½ metres thick, appears to be much more extensive than the fossil peat at Beaver Pond: beside an almost five-metre-long tree trunk and abundant plant fossils exposed near its surface, it has already yielded fragments of what seems to be a member of the horse lineage.

Part of John’s Peat (left), a peat site that was reinvestigated in 2019 and found to be a promising source of vertebrate fossils. The jaw of an extinct genus of beaver, Dipoides (right), found at the Beaver Pond site. (Left: Natalia Rybczynski; right: Winson Li)

PoLAR-FIT is supported by the Resolute, Nunavut-based Polar Continental Shelf Program (PCSP) and relies on the expertise of seasoned team members and PCSP staff. They are the lifeline for our expedition and dozens of others, coordinating air transport, field equipment and logistics for remote camps hundreds of kilometres from the nearest permanent settlement. Each day starts and ends with a regional communal check-in with PCSP over high-frequency radio spanning the High Arctic. We sit in our kitchen tent on coolers and rock-sampling pails as we wait for a call from PCSP headquarters. Then, a staticky voice takes attendance before our workday can begin.

For two weeks we live and work in near complete isolation, subsisting on a diet of Cracker Barrel cheese, cured meats, cabbage and a daily ration of Pringles, relying on wet wipes to clean off a never-ending accumulation of dirt and dust.

As we trek up and down the hills of Ellesmere Island, examining their geology and looking for new fossil-bearing sites, we see bits of petrified wood scattered across the cliff faces. These are the clear remains of an even older forest that formed about 45 million years ago. They remind us that the four-million-year-old Pliocene forest we’re studying, spectacularly preserved in peat and permafrost, is just one glimpse of the complex ways that Arctic landscapes and ecosystems respond to a changing climate.

Winson Li is a Master’s student completing his thesis on cosmogenic isotopes used for geologic dating at Dalhousie University, Halifax. This is his first Arctic field season. 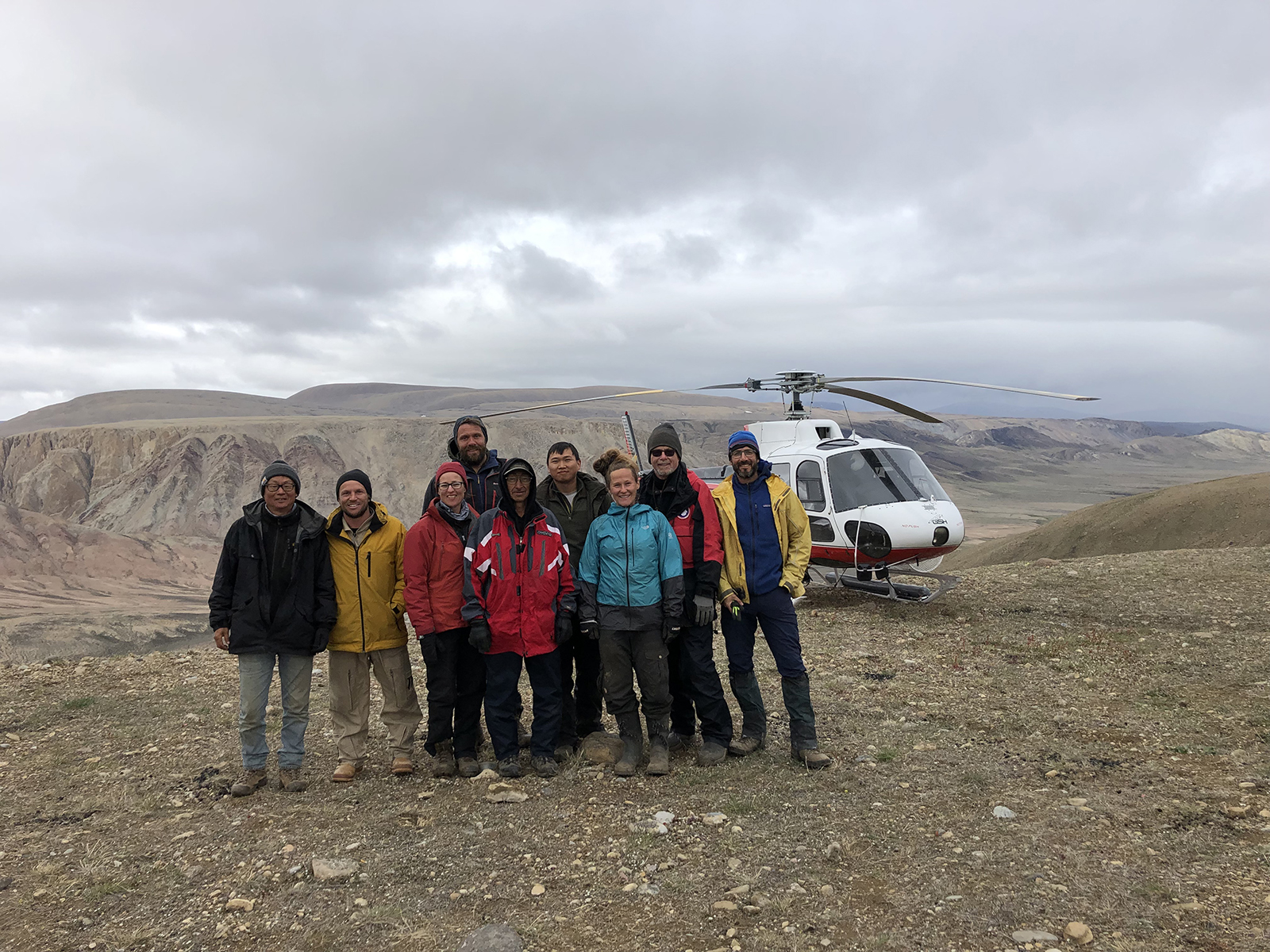