Tropical forests can handle rising temperatures up to a certain point, study finds

Trees in tropical regions of the globe can withstand temperatures up to 32.3 degrees Celsius and still effectively store carbon
By Samantha Pope
May 30, 2020

However, this comes with a warning: this can only be done if global greenhouse gas emissions are limited, and if temperatures remain under a certain threshold.

For years, scientists have worked to understand how the planet responds and adapts to a warming climate, and one of their major areas of focus has been how forests absorb and store atmospheric carbon dioxide. Many have looked at tropical forests in particular, as they hold 40 per cent of all the carbon stored by vegetation.

But, concerns have been expressed about rising temperatures disrupting a tree’s ability to store this carbon in these environments.

These concerns prompted an international team of more than 200 scientists to explore the long-term resilience of tropical forests to rising temperatures, by measuring how much carbon trees can store. The recent study, published in the journal Science, is the first to analyze long-term climate sensitivity based on direct observation of whole forests across the tropics.

“Up to a point, this is a good news story,” says Sean Thomas, a professor at the University of Toronto and one of the paper’s authors. “Tropical forests, due to their high diversity, are able to compensate and be resilient to moderate temperature increases.”

The scientists compiled data from about 600 forest plots throughout Amazonia, South America, Australia, Africa, and Southeast Asia. Some plots date back to the 1950s, but most of the study’s data have been compiled since the 1990s.

What they found is that trees can withstand temperatures up to 32.3 degrees Celsius and still effectively store carbon. If the increase in global average temperature is kept to two degrees Celsius above pre-industrial temperatures, as outlined in the 2015 U.N. Paris Agreement, there won’t be damaging long-term effects.

However, Thomas warns that if temperature increases are too fast or too extreme, then there is trouble. Beyond the 32.3 degrees Celsius threshold, trees’ leaves will begin shutting down and start to die, thus releasing their stored carbon back into the atmosphere. 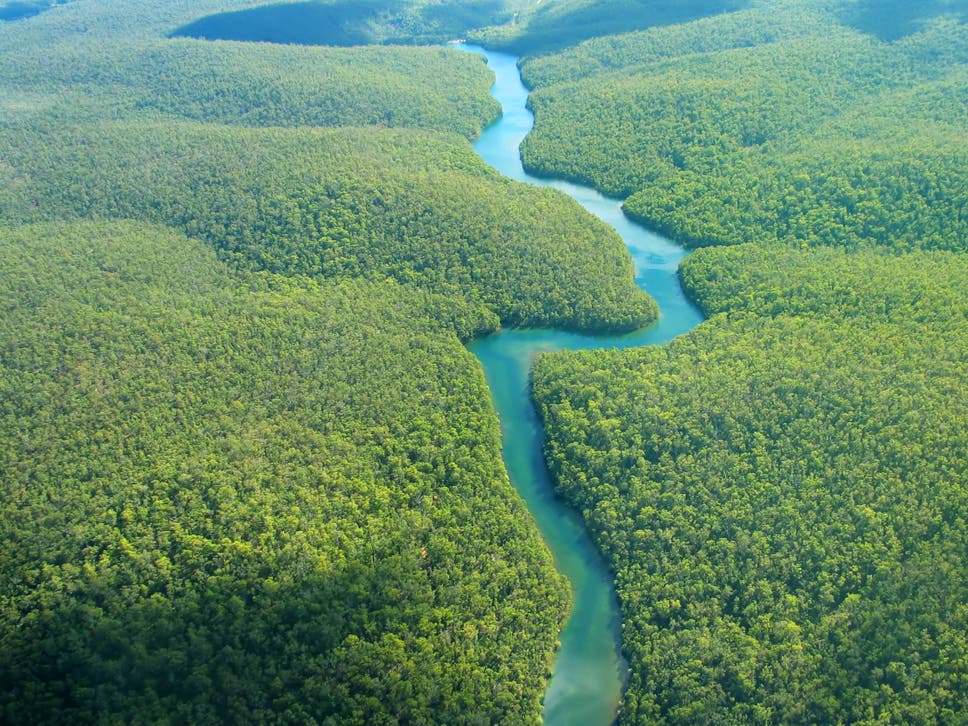 Tropical forests, such as the Amazon rainforest, store large amounts of carbon in trees and naturally regulate CO2 concentrations in the atmosphere. (Photo: Getty)

“Climate change would be more than twice as bad if we didn’t have these natural ecosystem services that are taking CO2 out of the atmosphere.”

Part of the reason tropical forests are resilient to rising temperatures is because of their biodiversity, Thomas says. As some tree species are better able to adapt to a warming climate than others, they can compensate for trees that don’t adapt as well and can eventually replace these species over time.

For example, Thomas says trees on the drier and hotter side of the forest within the Isthmus of Panama show a higher thermal optimum for photosynthesis and greater tolerance of high temperatures, according to research done at the Smithsonian Tropical Research Institute.

A tropical tree renowned globally for its tolerance of extremely hot environments is Leuceana leucocephala, commonly known as river tamarind, which is native to Mexico and central America. Thomas says he has visited forest restoration projects in hot dry valley systems in western China where this is the only tree species that will survive.

Regulating CO2 in the atmosphere

Thomas says we can predict global climate change trends by studying how natural systems like forests regulate CO2 concentrations in the atmosphere.

“The carbon-sucking mechanisms of tropical forests is a major factor in determining that rate of climate change,” he says. “If trees get too hot then they will flip from being a carbon sink to a carbon source.”

There is some evidence this is already happening in Amazonia, as explained in a paper released in Nature earlier this year. That study suggests that the Amazon could turn into a source of carbon dioxide by the next decade, because of decreased forest carbon uptake.

“We are hopeful that in the long-term, more thermally-resilient trees will respond to this,” says Thomas. “But, if temperature changes are too rapid or too big, then that won’t be possible.”