In 2005, a federal government program aimed to convert underused farmland into forests to capture carbon dioxide. How have these ‘Forest 2020’ projects fared?
By Peter Kuitenbrouwer
June 25, 2020

In the 2019 federal election campaign, Justin Trudeau vowed to plant two billion trees across Canada over 10 years to combat climate change. In fact, Ottawa has tried this before. In 2005, the federal government planted trees on close to 6,000 hectares of underused farm fields across Canada under a program called Forest 2020, an experiment to measure the forests’ effectiveness at capturing carbon. The program required landowners to protect the trees for 15 years, hence the name — so how have those trees fared?

In 2005 Dolf and Anne Wynia, landowners in Norfolk County, Ontario, leapt at the chance to convert their 12-hectare farm to forest. They were renting their land to a tobacco farmer, at a time when tobacco fields dominated the north shore of Lake Erie. But Anne felt like a hypocrite: she sat on the local Smoke-Free Places Action Committee.

“Tobacco went out of fashion,” she says. Dolf, who spent his career in forestry, wrote his own prescription for the planting. The 8,600 trees filled four quadrants, one each for spruce, white pine, red pine and European larch. In every fourth row went leaf trees, including cherry, hickory, oak, walnut and tulip trees. Ottawa paid up to 75 per cent of the cost. 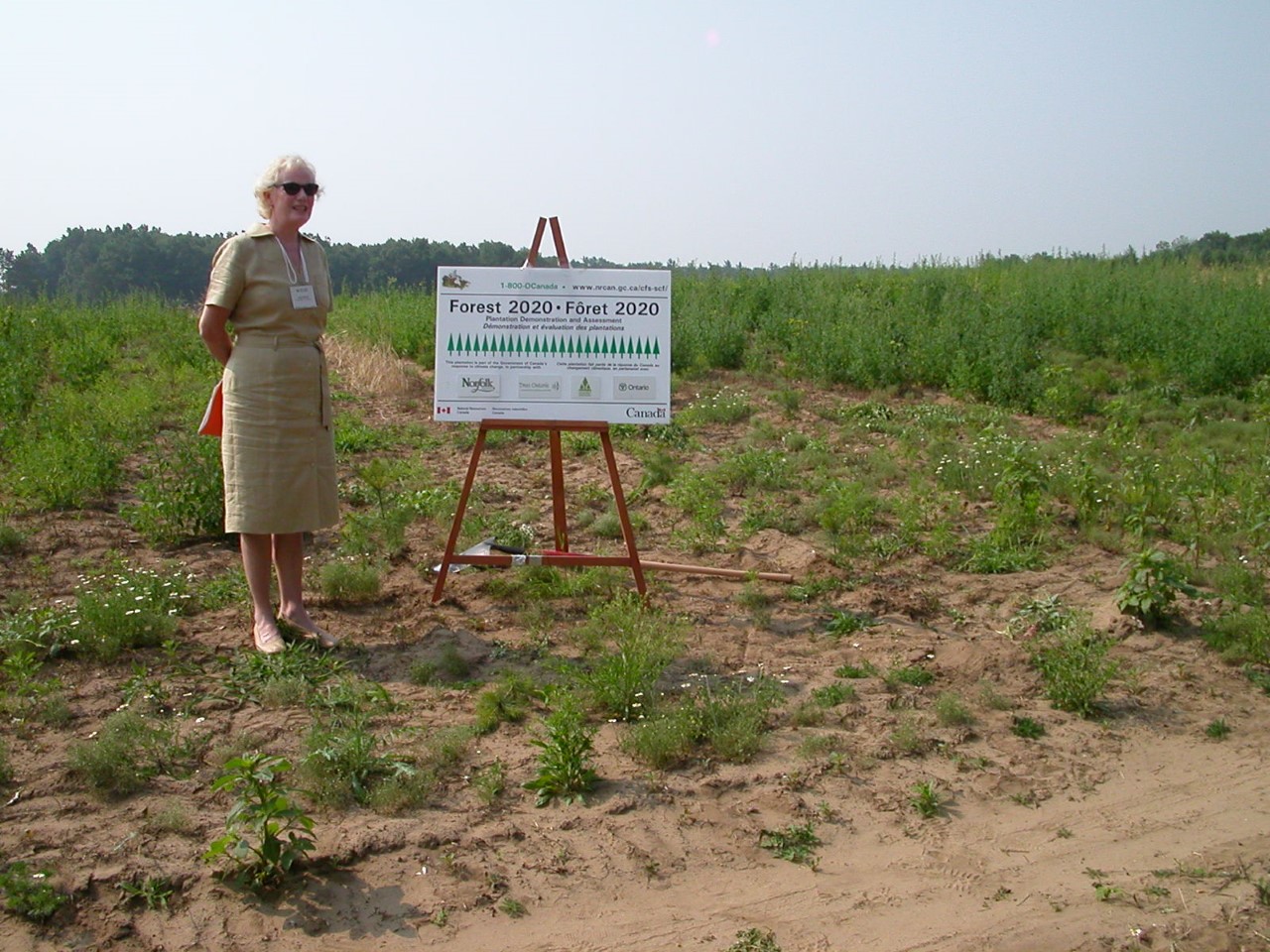 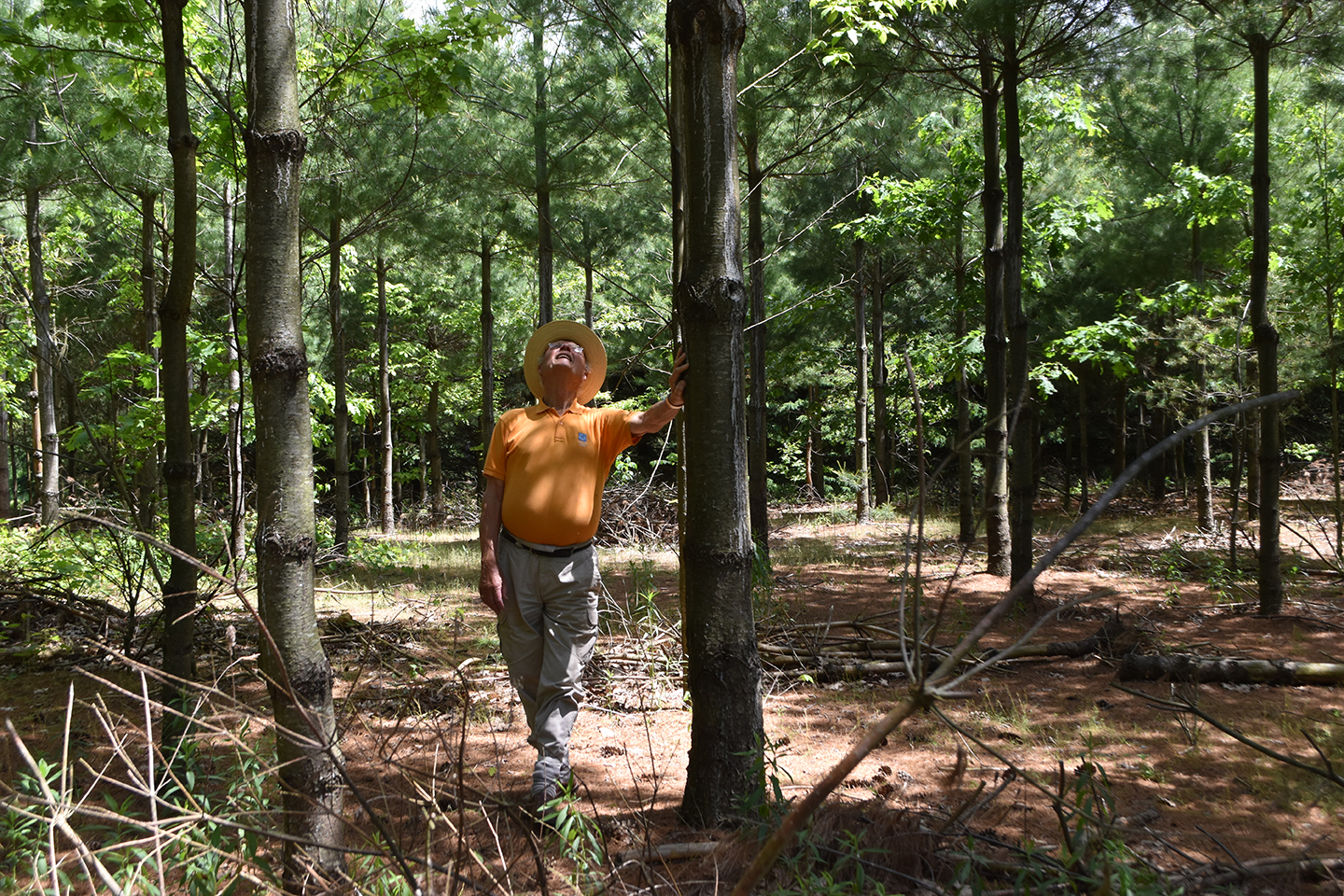 Top: Anne Koven, then chief executive of the Ontario Forestry Association, poses at the site of trees planted at the Wynia property under the federal Forest 2020 program on June 5, 2005. Above: Dolf Wynia looks up at his now-15-year-old white pines. (Photos: Dolf Wynia, Peter Kuitenbrouwer)

Fifteen years seems a short time. Yet today, the Wynias, who had a farm, now inhabit a forest. The trees dwarf their house. Their yard resembles a scene from an old Disney animated movie: on a late spring afternoon, chipmunks dart across the shady patio and giant swallowtail butterflies flit past; the song of orioles fills the air. Anne rocks on a chair Dolf crafted from white oak.

“In the fall we have masses of edible mushrooms,” she says. In winter, crews trim the lower branches of the pines to make wreaths for Christmas; the pruning improves the trees’ value as timber.

Was the investment worthwhile? Dolf notes that, “right now, timber is growing faster in value than bank deposits. We can pass it on to the next generation.” The trees also capture carbon; Dolf, who hails from the Netherlands, estimates the couple could make 50 transatlantic round trips and still be carbon neutral.

Researchers with the Canadian Wood Fibre Centre call the Forest 2020 experiment a success; noting that if one plants the right forest for a site, one can sequester carbon at rates much higher than initially anticipated. A Forestry Chronicle study found that, right now, landowners earn more money growing crops than trees. But those scientists add that higher future carbon prices will make planting forests more attractive. Opportunities for carbon-capture deals with corporations seeking carbon neutrality, such as airlines, may lure more landowners to make the same choice as the Wynias.

The Wynias, meanwhile, are content to love their forest. Anne has just one complaint.

“I would have put the larch by the house, because in the winter larch needles fall and the sun would come in,” she says. “Instead they put the white pine here and now it is shading the whole house in winter. I said to Dolf, ‘You are a forester. You should have known better.’”