Ours to save: the species that can only be found in Canada | Canadian Geographic

Ours to save: the species that can only be found in Canada

A new report from Nature Conservancy Canada and NatureServe Canada is the first of its kind to compile over 300 species that are unique to Canada.
By Abi Hayward
June 5, 2020

There’s a little plant in the Northwest Territories called a hairy braya. It’s small and tufty with white flowers and kind of hairy leaves, and was first collected by one of the naturalists on Franklin’s expedition in 1826.

It fell out of botanical memory and was presumed extinct until 2004, when it was rediscovered – right at the spot where the 19th century explorers had first found it. We now know the hairy braya is endemic to the Cape Bathurst Peninsula and Baillie Islands. It isn’t found anywhere else. And though its home is remote, it is threatened by climate change and rising sea levels.

The hairy braya is one of 308 species that are only found in Canada, according to a new report from Nature Conservancy Canada and NatureServe Canada, released during Canada’s Environment Week.

“This was a way to kind of say ‘Ok Canada: what is our role in stopping global extinction?’” says Dan Kraus, NCC’s senior conservation biologist and one of the co-authors of the report.

“There's lots of species that we have that we share responsibility for and we need to protect those. But there is this select group of species that only occur in Canada and nowhere else. There’s really no plan B. Either we protect them or we see them go extinct.”

Kraus worked with Amie Enns from NatureServe Canada, using data from the conservation network’s Conservation Data Centres, which are distributed across Canada’s provinces and territories. This new report is the first comprehensive list of species, subspecies and varieties of animals, plants and fungi that are unique, or “endemic”, to Canada.

Canada has much fewer endemic species than countries with tropical climates like Brazil or Indonesia. That’s because Canada was covered with ice during the last glacial period.

“There just hasn't been as much time for species to evolve,” explains Kraus. But there were places that were free of ice during the last glaciation, and it is thought that these areas became “refugia” where some species were able to survive the icy climes. These places occurred on the continental shelf of the Atlantic Ocean, or in Beringia, the ancient land bridge which stretched from the Yukon through Alaska into Russia.

“If we look at where endemic species are today, there does seem to be a correlation between places that were likely ice free during the last period of glaciation,” says Kraus.

More than one third of Canada’s endemic species are from British Columbia, many of which are found on islands like Haida Gwaii and Vancouver Island, places thought to have acted as refugia during this time. These islands are home to many of Canada’s endemic mammals and birds, like the Vancouver Island marmot or the Queen Charlotte hairy woodpecker, or the iconic kermode or “spirit” bear — a subspecies of black bear.

“Where species are isolated, they’re more likely to evolve into new species,” explains Kraus. “The finches on the Galapagos are the classic example,” referring to the birds associated with Darwin’s theory of natural selection.

Alternatively, specialized environmental conditions might have driven evolution in unique habitats. For example, the sand dunes on the shores of Lake Athabasca, between Saskatchewan and Alberta, are home to a high concentration of endemic vascular plants like the Athabasca starwort and the Athabasca thrift. The report identifies 27 such “hotspots” of endemism, which occur in every province and territory. 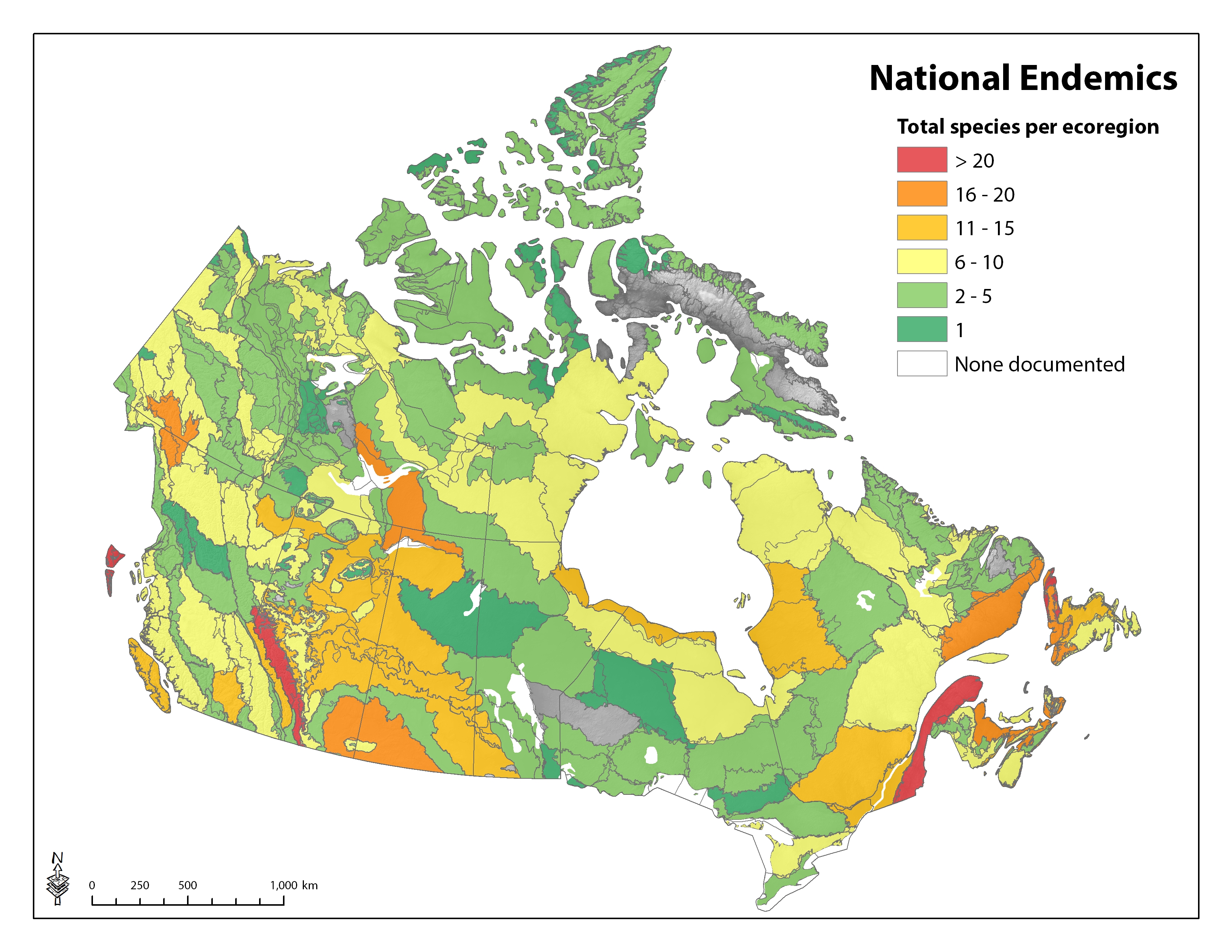 Worryingly, the vast majority of the animals, plants and fungi on this list are vulnerable to extinction, with almost 40 per cent being labelled as “critically imperilled” according to NatureServe’s methodology. Endemic species can be especially vulnerable to extinction because of their often small geographic ranges and population sizes.

“A natural event, or increasingly human-caused event, in a very small area could cause the loss of a large portion or even all of the population.” says Kraus.

Kraus hopes the report raises awareness about the animals, plants and fungi that are unique to Canada.

“I think most Canadians, if you ask them to name an endangered animal, they'll name something not from Canada,” says the biologist. “And it's important, you know, Canadians need to know about the plight of orangutans or African elephants. But these are species that we have complete responsibility and stewardship for.”

The report also stresses the need for further research, with Kraus making the point that there are still many blank spots on the Canadian map where areas still lack up-to-date inventories of plants and animals. Further study in the hotspots identified in the report could even lead to the discovery of new endemic species.

Although 56 of the 308 species on the list have been ranked by NatureServe as “critically imperilled” or “imperilled”, they have not all been assessed by the Committee on the Status of Endangered Wildlife in Canada or by the International Union for the Conservation of Nature , the bodies that make assessments that lead to legislation which protects wildlife. Patrick Henry, the executive director of NatureServe Canada, hopes that the report encourages these assessments to take place in order to better understand these species and make sure that conservation actions are taken to protect them.

“We can do something to ensure their long term protection,” says Henry. “And that's only going to be us, Canadians, who are going to do that.”