North Beach was a special place. The picturesque shoreline was the backdrop to campfires, ocean service projects and personal reflection. On the second night in Haida Gwaii, as I watched the shadow of Toe Hill creep along the sandy shore of North Beach and the fading orange glow over the waves, I understood why all my friends in Alberta were envious of my opportunity to visit this place. Yet, a week later, we cleared some 1,000 kilograms of ocean debris off the shore of this beach I had so admired. This dichotomy is still hard to wrap my mind around. From afar the beach seemed so untouched, yet every log hid another piece of plastic.

I was shocked by not just the volume, but the variety of plastic present. Industry seemed to be a large contributor to this waste, but much of the garbage I found came from everyday people: shoes, toys, water bottles, toothbrushes and straws. Although I shared everyone’s excitement at having removed such a large amount of waste from this ecosystem, I was frustrated. The amount of plastic I had to leave behind bothered me. At the end of the day I was walking back with Matt. We had filled all but one bag and needed to meet the rest of the team before the tide came in. We were in a rush, but I pulled out my last bag to pick up any obvious pieces of garbage we came across. In just 10 minutes of fairly inattentive collecting, the bag was full. Matt found a collection of plastic bottles in the driftwood so large we were unable to carry them all; we had to improvise ways of collecting the trash just in this one spot. With about a kilometre to go until I reached the truck, I had to ignore the rest of what I came across. Eventually I walked the intertidal zone so I wouldn’t have to see it all. 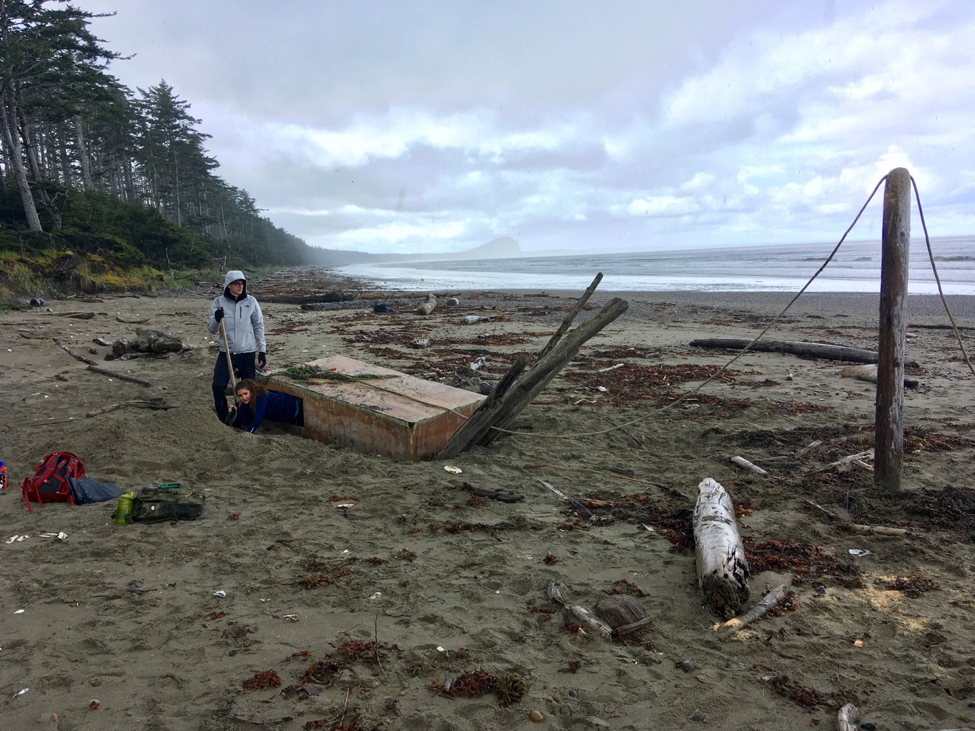 That experience deepened my concerns about the volume of plastic at other more remote beaches, like T’aalan Stl’ang. I am disappointed that in the 60-odd years disposable plastics have been widely available to consumers, they have been so mismanaged that our ecosystems have reached this level of contamination.

Microplastic pollution and ocean debris is not a new concept for me. I have read articles on it, and watched films. However, living in landlocked communities, it can be difficult to conceptualize the realities of this pollution. North Beach has made the issue of plastic pollution personal for me. I not only saw the magnitude of plastic being washed ashore in some locations, but also saw what is at stake if this pollution continues unchecked. The marine life around Haida Gwaii is so abundant, and has enormous economic and cultural importance to Haida communities. Along North Beach I was able to watch locals crab dipping and I was graciously invited to join Duffy clam digging. It’s these connections to the land, as well as these livelihoods that are being threatened by waste produced far away.

I am thankful for having had the opportunity to join everyone in Haida Gwaii because it is experiential learning like this that causes change. Its not until you are on the ground and speaking with community members that you being to realize the complexities of an issue. The other day I joined my brother at the movie theatre. Having come back from picking up hundreds of bottle caps and plastic straws on North Beach, I was overwhelmed at the amount of single-use plastic around me and how unfair it is that the Haida nation is bearing the negative consequences of a world economy so flooded with plastic products. As I look to the rest of the year with Ocean Bridge I think I will need to find ways to keep my frustrations around the plastic debris I witnessed at the forefront of my work moving forward, and find ways to make the connection real for those I am reaching with my service projects.

Growing up at the headwaters of the North Saskatchewan River in Alberta, Jordan knows that many of his favorite outdoor activities would not be possible without the protection of natural spaces in Canada. He studied Biological Sciences at the University of Calgary and hopes that, through Ocean Bridge, he can engage his comm​unity in responsible environmental practices and demonstrate how an Albertan’s everyday activities impact our oceans.