RCGS Explorer-in-Residence Ray Zahab and Italian ultrarunner Stefano Gregoretti cut short their expedition across Russia's Kamchatka Peninsula after learning the rivers they planned to traverse were no longer frozen
By Tanya Kirnishni
March 14, 2019

Ray Zahab and his expedition partner Stefano Gregoretti breathed a sigh of relief last week as they emerged from avalanche-prone mountains on Russia’s Kamchatka Peninsula, where strong winds had threatened to push their sleds off a sheer cliff. They thought the most difficult portion of their journey was behind them, but a different challenge lay ahead: warmer-than-usual temperatures had thinned the river ice on the next leg of their planned route.

Zahab, an Explorer-in-Residence of The Royal Canadian Geographical Society, and fellow ultrarunner Gregoretti set off on their Trans-Kamchatka Expedition in early February. Both are seasoned adventurers; Zahab has more than 14,000 kilometres under his belt from previous expeditions across deserts and polar terrain. Carrying all their gear and equipment with them, they spent nearly three weeks travelling on foot through a harsh Arctic landscape. The poor ice conditions in the last third of their journey were an unforeseen obstacle.

Weighing the risks, Zahab and Gregoretti made the tough call to cut short their expedition. “Being an explorer is not only my livelihood, it’s my passion,” Zahab wrote on Facebook, “but making good decisions and setting that example for my daughters, and being here alive for them, trumps everything else.”

Read on for a glimpse at Zahab and Gregoretti’s expedition diary. 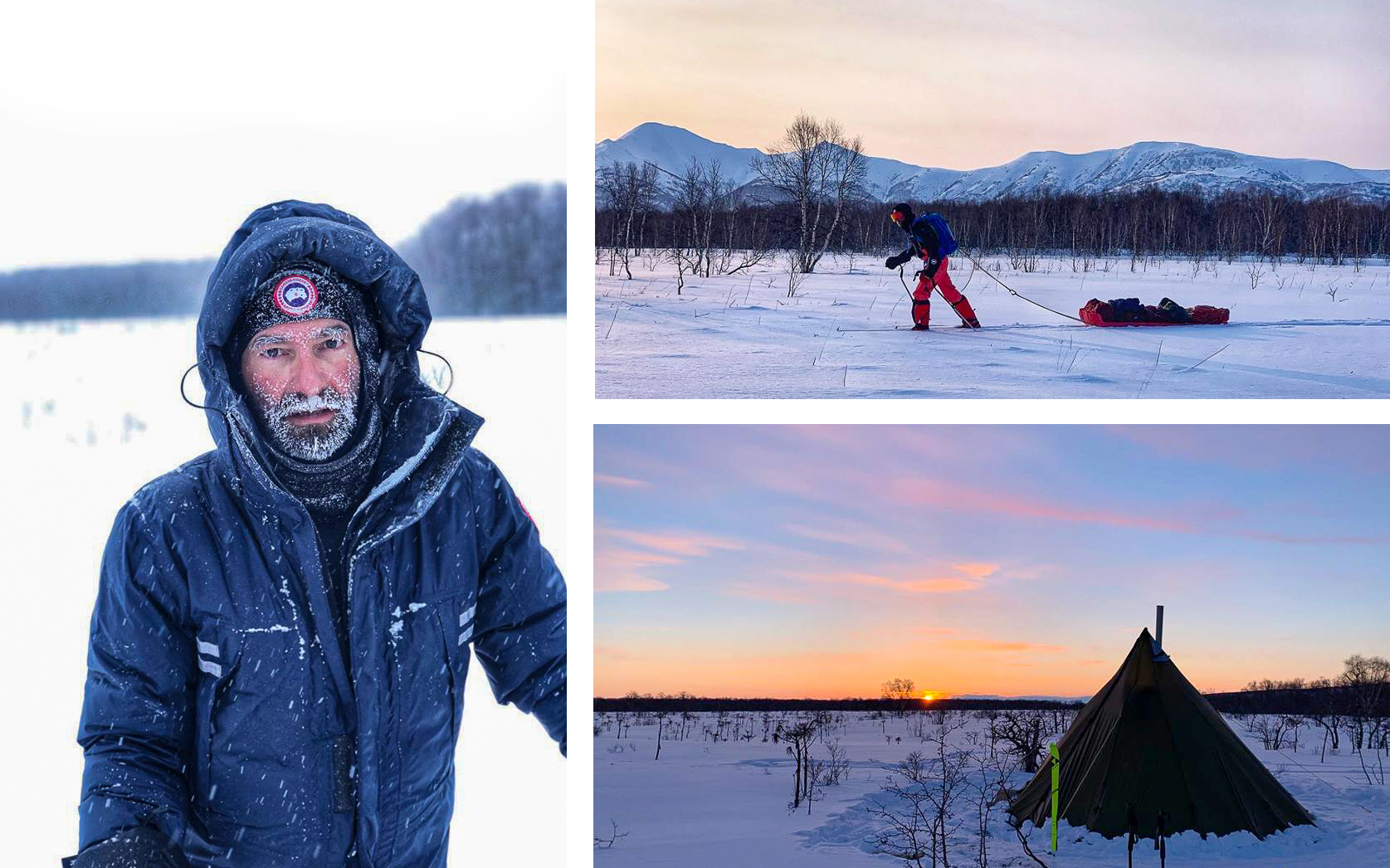 It’s been a combination of absolute highs and lows. Highs: incredible sunrises, using wolf tracks as a “forest navigation” tool to find the best route, gorgeous valleys and snowy plateaus ... And then there’s the lows. We originally planned on traversing Kamchatka on frozen rivers, which is the fastest and most efficient way to traverse unsupported, but thus far we’ve only been able to find small sections safe enough to travel on. We’ve had a few close calls and wet skis a few times. Currents are strong so we are being as safe as possible, which has meant navigating off-river and into forests that are filled with gulleys and three to four feet of snow. 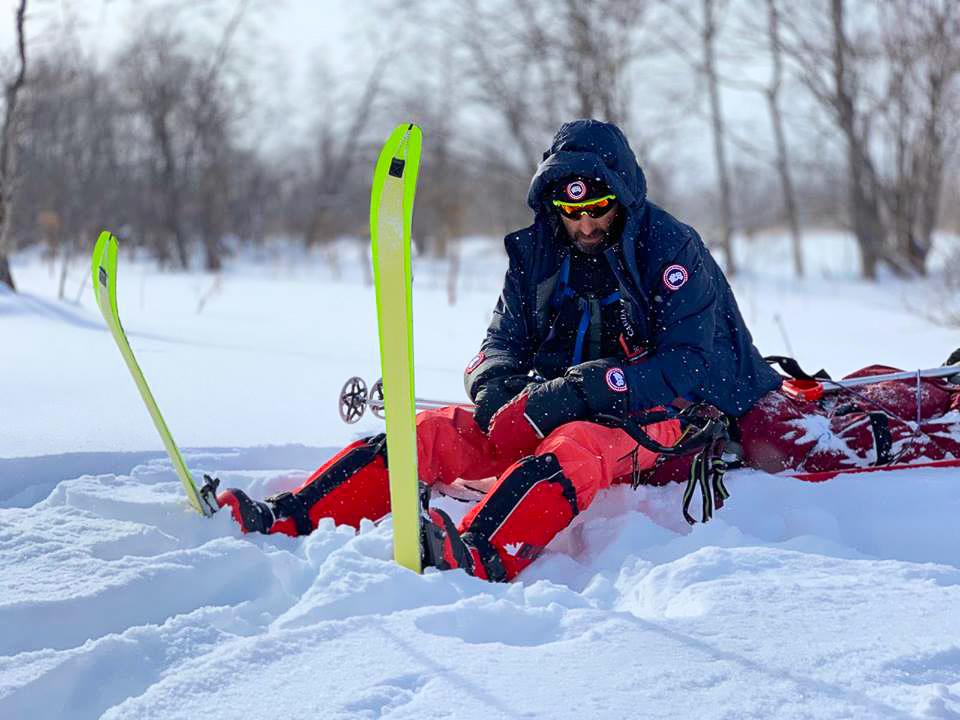 We scout ahead a few kilometres at a time, then return for our sleds and repeat. The cost of travelling this way is high, and our food and time is the currency, but we are super determined to keep going. I can’t think of another expedition where getting these meager distances covered each day has been so crazy difficult! It’s frustrating to say the least that we are having to constantly deviate from our original route, which took so long to plan, but that’s the hand we’ve been dealt, and we are pushing forward and taking in this incredibly beautiful place I’ve dreamed about for so many years. 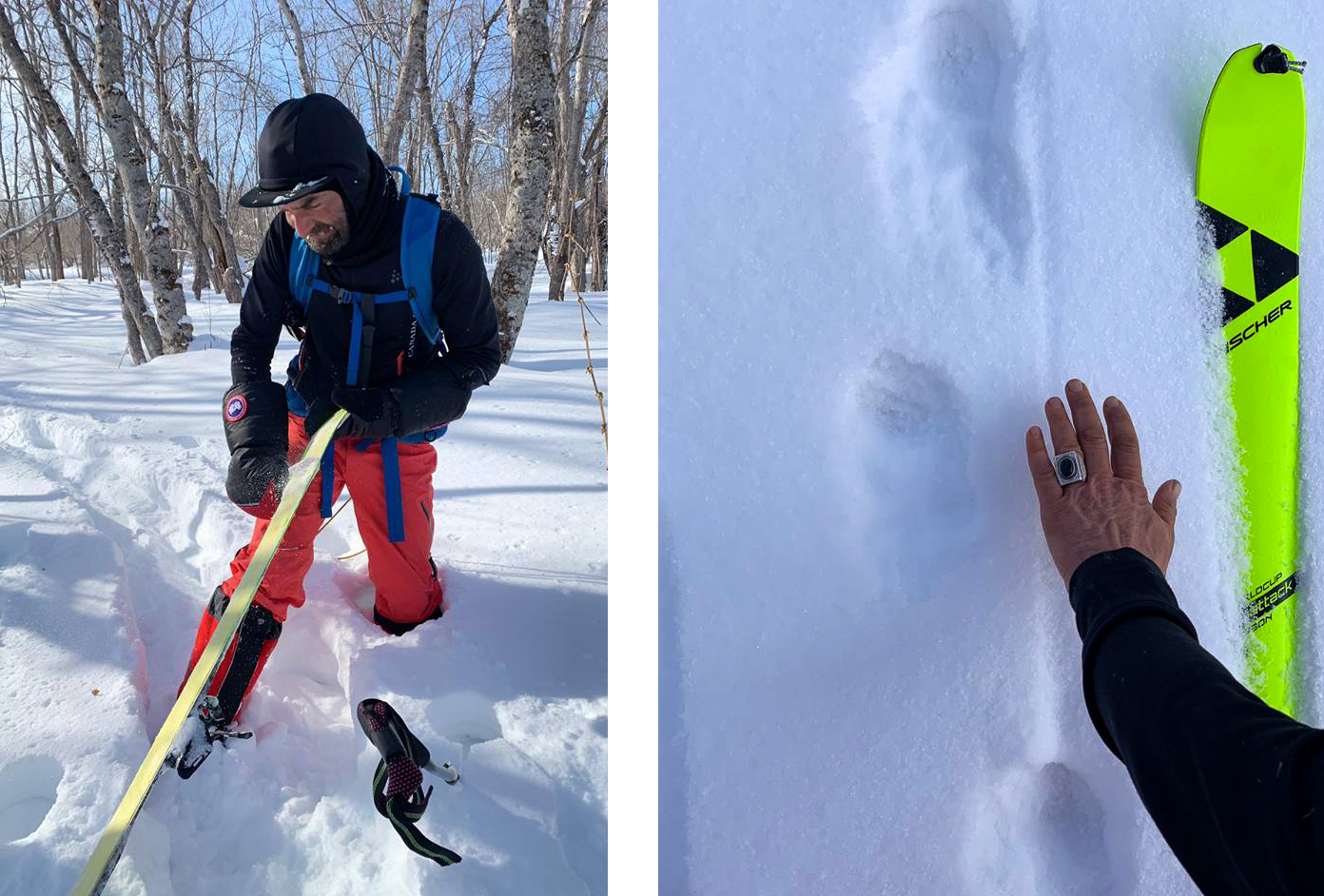 Left: Zahab scrapes ice off his skis after a close call breaking through some slushy overflow from a river. Right: Zahab shows the size of the wolf tracks they have encountered.

After crossing two smaller, older avalanche slides, we were super careful to keep ascending and moving swiftly past an unsettling avalanche zone and onto this small plateau. We headed up a steeper and steeper grade to the point where our skis no longer gripped, and we shed our skis to begin cutting steps into hard, wind-blown snow on a near vertical slope. The last 100 metres, plus the saddle (which I thought based on topographical maps would be wider, but was in fact only about 20 feet across with huge vertical drops on either side) took us two hours to cross, and hauling our sleds up and over took everything we had. 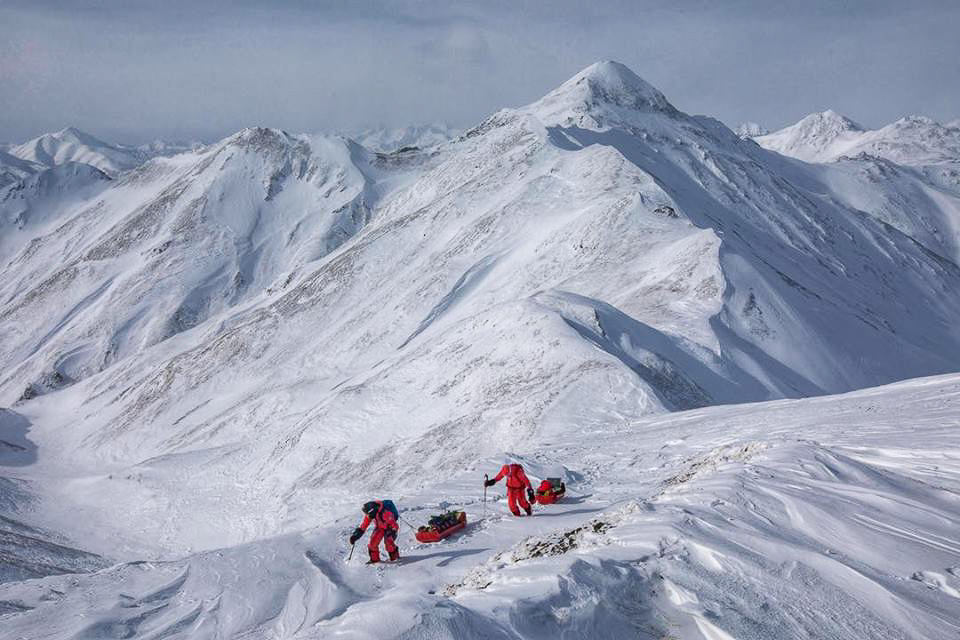 After exiting the mountains a few days ago, with the goal of heading east to Mil’kovo before our last piece of the expedition, we met with our team and local hunters. It’s been unusually and incredibly warm here right now, already a bad sign. The word is that all the rivers we have to cross to reach the eastern coast — some large, fast-moving and deep — are open. These rivers, ice-free, now pose a natural physical barrier. The risk is way too high, and it would be foolish to risk life in trying to cross these open rivers. Compound that with the fact I am not comfortable putting others at risk for potential rescue because I chose our egos ahead of sensibility.

I have completed more than a dozen successful expeditions both supported and unsupported across the world’s deserts, the Arctic, Siberia, and Antarctica, totaling over 14,000 kilometres covered on foot. I have learned by now when “it just isn’t going to happen.” We have spent close to three weeks navigating and traversing this epic wilderness unsupported, taking calculated risks on thin ice with open moving water all around us, deep snow, and through abnormal conditions we didn’t expect. I pushed myself harder over these weeks than on any other expedition. But now, given the local knowledge of the rivers being open, we have decided it is no longer safe to continue. It helped when one of the hunters who didn’t speak English did the “you’d be crazy” hand gestures. 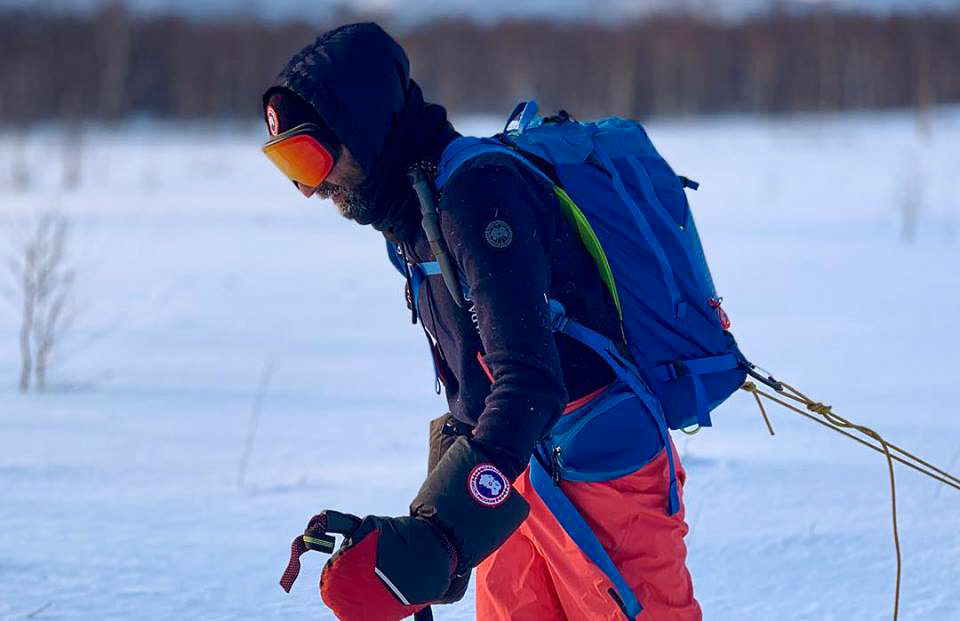 We are ready, and in any other year with a regular, colder winter and a bit of ice, we’d certainly push the limit and get it done. Stefano has three daughters, I have two. My oldest, Mia, is already expressing an interest in big adventures in the future. Adventure, and being an explorer, is not only my livelihood, it’s my passion, but making good decisions and setting that example for my daughters, and being here alive for them, trumps everything else. I also mentor youth adventurers with impossible2Possible, and want them to learn to challenge themselves but also mitigate danger. Of course I take huge risks; it’s part of the job, and it’s one if the exhilarating components of being on an expedition in a place that is so wild, but it’s well-planned risk, with an emphasis on using all of my knowledge and gut instinct to make the right decision. 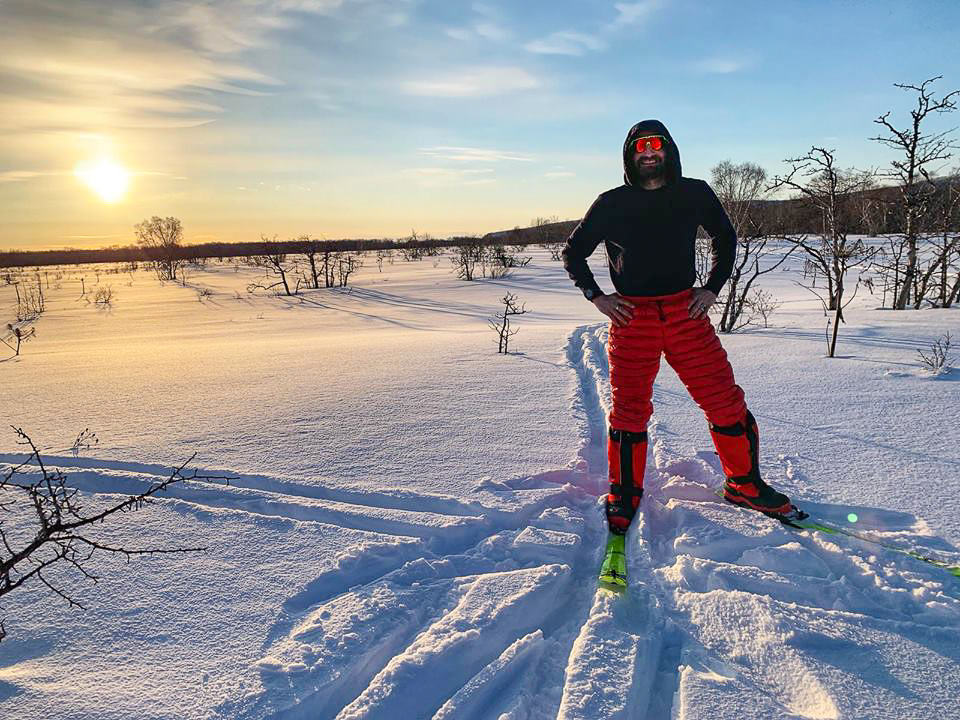 So there you have it. Our expedition ends on the outskirts of Mil’kovo. Any other year, we’d be finishing in the Pacific. We are obviously very sad we cannot continue, but that’s adventure. That’s true exploration. Sometimes things just don’t go the way you want them to, but when Mother Nature says you are done, you are done.

Zahab's team will be posting more photos, videos and stories from the expedition in the coming days so be sure to check out the expedition website and Zahab’s Facebook page.