Cheryl White is an industrial engineer, not a mapmaker. At least, that was the case until recently.

White has created an interactive map that shows which businesses in Canada have adopted mandatory masking policies to help prevent the spread of the COVID-19 pandemic. What started out in May as a scattering of points across Toronto has burgeoned into a national resource that Canadians can use to choose where they buy groceries, get their bikes repaired, pick up their daily coffee, or see tropical butterflies.

Cheryl White spoke with Canadian Geographic about why she created the map, how it grew, and her own connection to the importance of wearing a mask.

On how the mask map came to be

When the pandemic hit and we were getting advice to avoid contact with others — make sure we physically distance, only grocery shop once a week or fortnight — I was a bit concerned about interactions in grocery stores, because not everyone was adhering to two meters. There were a lot of situations where it was just impossible or impractical. I just felt more comfortable shopping where masks were required. I had heard that there were a few stores in Toronto, where I live, that had those kinds of rules and, in a few exchanges on Twitter, some friends and I were discussing it and thought “What if we started to keep track of them?” So I said, “Ok, sure, I'll try to figure that out. I've never made a map before! But there's lots of digital tools that help with learning new things.  So maybe I'll see what I can do.”

On creating the points on the map

Some of the points are national chains or national rules. So that point up there at the top in Cambridge Bay, Nunavut, is an airport. From Google, I understood that all Canadian airports have mandatory mask policies. So I was trying to populate the airports that I found because I kept getting one-offs from people like “my airport in my city is requiring it.” When I looked it up, it said all airports. That's why I added those points, even though I didn't receive a tip from up there. But also, in the GTA, we have a chain of grocery stores called Longo’s. They were one of the early chains to have a mandatory masking rule. And then the other thing you'll notice is that there's two different point colors. So the blues were what I started with, and those were the places where there was a mandatory masking rule. Then I added a second, yellow, layer for the stores that had almost 100 percent compliance because they had a policy of highly recommending a mask, but also handing a mask out to everyone walking in.  So that was, early on, a way of really increasing the number of points and being able to provide a point to cities that wouldn't otherwise have one. Costco is an example of that, and Whole Foods also does it that way.

It started to grow across the Greater Toronto Area, and people across Ontario started asking me if I would consider plotting points that they found in their communities. I thought, “Well ok, that's fine.” There was a lot of interaction and, because I was crowdsourcing from Twitter, every time someone responded, a lot of their contacts would see it — and so it was growing that way. But the other way is that there is a group of mostly physicians called Masks4Canada who are doing really good work collecting scientific research and advocating for mandatory masking policies in all indoor spaces, in crowds and in transit — they really feel like wearing a mask is going to make a big difference. They liked the map and said, “we'll boost it”. And it got a lot of traction. 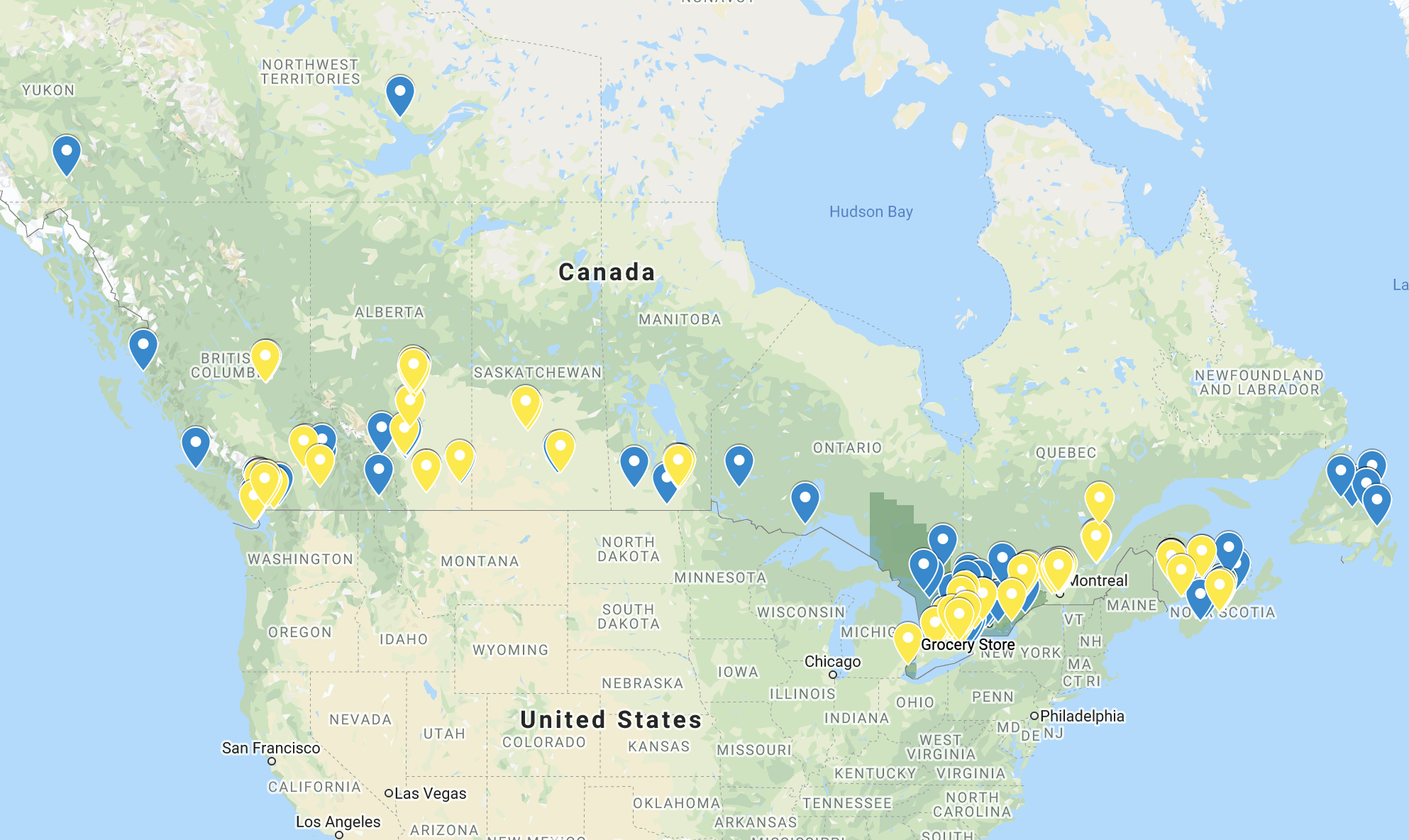 They're really talented, smart people. And there's a few of us that are from the community or different kinds of contributors — they invited me to join the group and it's been a really good experience. I've gotten a lot of help from them, too. There's a few lawyers on the team, and they’ve been helping me understand where the bylaws of the different health authorities apply to, and stuff like that. I'm not a mapping expert, and I don't know some of the medical or legal information. So they're helping me out with a little bit of that as well. I’m trying to support however I can because I really believe in the work they're doing.

One of the things that I noticed is that people want to contribute. So people want to participate in our response to COVID-19. They want to feel like they have — I mean, everyone has — something to offer. But the way that the pandemic hit us saw a lot of people sitting at home not being asked to help out, or they were being asked to help by staying home but that doesn't feel like a tangible contribution. So I think maybe the uptake of the map and the willingness to help … you know, people were going out for walks to try to source tips for me. People want to have a task and they want to help in that way. I think that might be part of it too.  A lot of people really care about this. Walking into a space, knowing that maybe not everyone but almost everyone, is wearing a mask, people feel a lot more secure. They feel like they can concentrate on their grocery shopping or doing whatever errand they need to do. They're not so worried about having someone encroach into their two metre space.

On what she hopes people will take away from the map

From what I'm reading and what I'm hearing, I'm worried that there will be a second wave. I think experts are suggesting that that's not unlikely. So I'm just hopeful that people will have experience with masks, that they'll be practiced with them so that if and when that happens, we'll have a faster conversion. I know a lot of people have a hard time at first wearing masks; it feels weird. So I think we have a little bit of breathing space now that it would be nice if: 1) there were a resource for whoever wants to wear masks and wants to be surrounded by people wearing masks that they can already do that. But 2) as the advocacy is going ahead, we're starting to see in Ontario whole municipalities and regions are hoping to have mandatory masks in all grocery stores and all public spaces. That’s what we're working on right now: being proactive, rather than having to be reactive about it.

On her personal connection, as a cancer survivor, to the need to wear a mask

I didn't have any experience with illness before I was diagnosed [with breast cancer] just over a year ago. I was in treatment until shortly before the pandemic was announced. So I had been used to doing things, like, I didn't have words for them, but I was doing social distancing long before it was introduced for coronavirus. Trying to stay away from crowds, trying to stay away from people when they knew they had a cold. I was already kind of aware of some of the behaviors that would help me to not get this. So once you're operating that way for a while, and you're used to it, it sort of sticks. I definitely, having had the experience of being ill, really hope that as many people as possible can avoid that. I think it's worth a small effort to avoid people getting sick and suffering in that way.

I'm doing very well, now. I'm back at work full time. But, because of the pandemic, I'm working part-time at work and then part-time working from home. I'm doing really well, but I'm still in treatment. There's still some infusions, some other medication for a while yet. I'm actually going to the cancer center, and one of the things I've talked about, too, is that even though I feel well, it would be pretty awful if ever I became an asymptomatic carrier … if I contracted it and didn't realise and was spreading it to people who are even more vulnerable. So it is definitely something I think about. It has influenced for sure my level of concern for this issue.

I see someone out in a mask and I see that as a sign of their respect for others, their kindness. Because their mask protects me, my mask protects them. So if as many of us as possible are wearing masks, then we're protecting our society together.

You can add points or suggest edits to the map through this online form.