Justin Barbour and his canine pal, Saku, traversed 1,000 kilometres across the Labrador Peninsula through harsh snow storms and sub-zero temperatures, but were stopped just shy of their end goal
By Justin Barbour
December 21, 2018

It was at 2:15 a.m. on July 25, 2018, while I had long been awake staring at my dark bedroom ceiling, that my mobile alarm clock shot out the artificial sounds of quacking ducks. Soon I would rise to the real thing, as my dog Saku and I were about to catch a flight to the “Big Land” known as Labrador. The curiosity of what lay ahead screamed inside me. The objective: To travel 1,700 kilometres along old Indigenous routes by canoe, from North West River, N.L., to Kuujjuarapik, Que., located on the shores of Hudson Bay. Our biggest hurdles would be the steep 600-metre river ascent, lakes as big as oceans and unforgiving fall weather which behaves more like an eager winter.

One of my inspirations for this expedition was the well-known Leonidas Hubbard “Lure of the Labrador Wild” journey of 1903. Much like the Hubbard expedition, many were confused by our late summer departure. “Does he have any idea how bad the winds are in the fall and how quickly snow can come?” What they didn’t know was that I was well-educated on these very trends. After a year living in Cartwright, N.L., on the eastern coast in 2016, I had become accustomed to the sometimes brutal fall weather of the province. 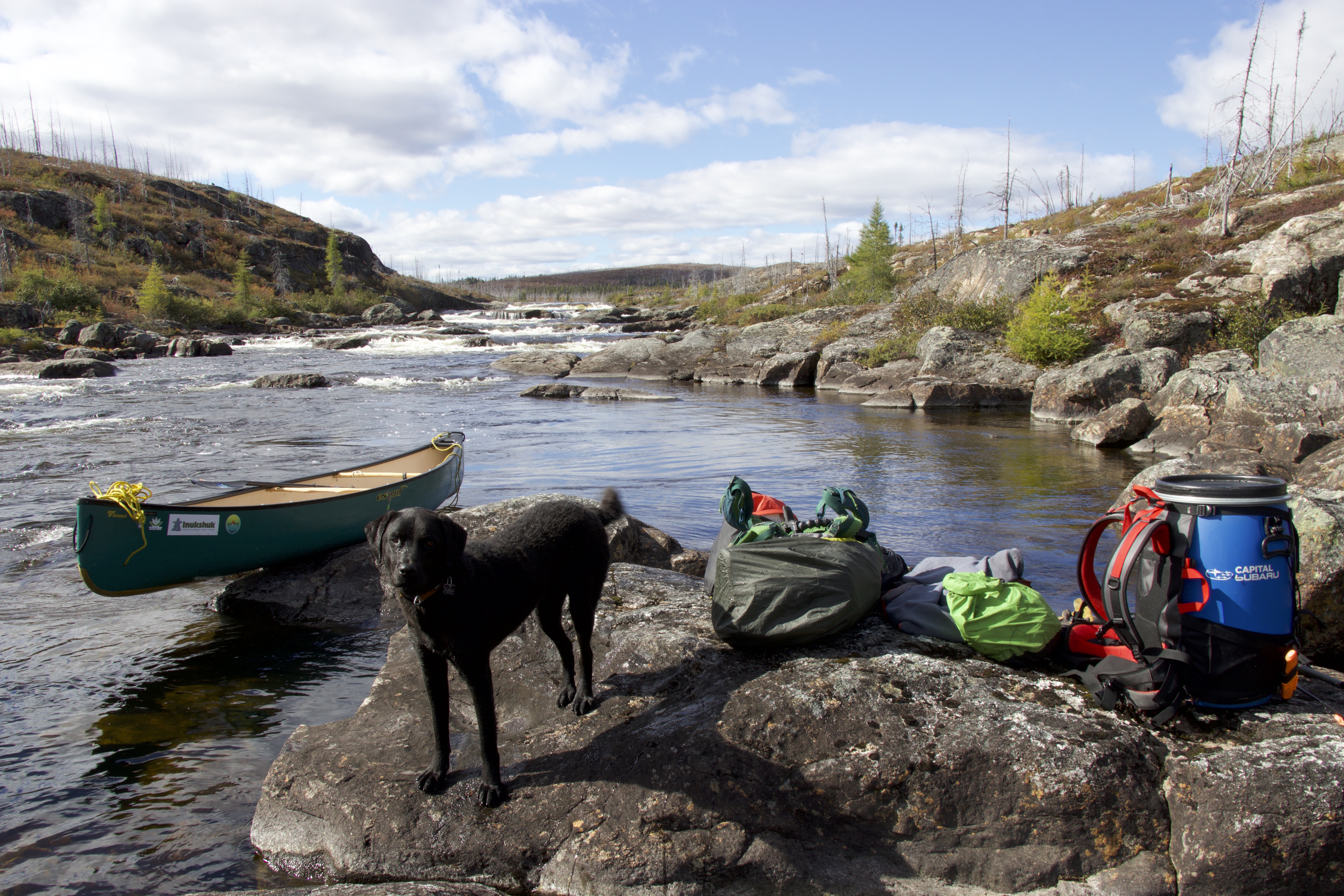 Saku waits for a portage on the upper reaches of the McPhadyen River, N.L., in mid-September. (Photo: Justin Barbour)

For 83 days straight we harmoniously lived in exhilaration. Human contact totalled less than 24 hours as we were left to our own devices in the cruel but hypnotizing Labrador outback. We beat the beauty of rivers, brooks, lakes, bush, desolate barrens and low sub-Arctic tundra. We basked, along with black bears, moose and pine martens, in the immense freedom of the land. We carved our own 175-kilometre route along the very much undocumented, dangerous and challenging Red Wine River system. Swift and slippery, it often swept me clear off my feet and tumbled me head over heels.

We travelled 200 kilometres by canoe through persistent head on prevailing westerlies, driving rains, eerie fog, blistering sun and world-class fishing grounds across the province’s biggest body of water, and the second largest reservoir by surface area on the globe, Smallwood Reservoir. We tasted the shorelines of the McPhadyen River as we continued to climb towards the border of Quebec.

Where the river divides, I felt privileged to connect the beauty of the two provinces that make up the Labrador Peninsula, holding some of the world’s most inhospitable, raw and compelling wilderness. From here, we paddled downstream to Quebec’s largest lake, Caniapiscau Reservoir. It was after two weeks on that angry inland sea that our hopes of finishing this expedition were dashed. 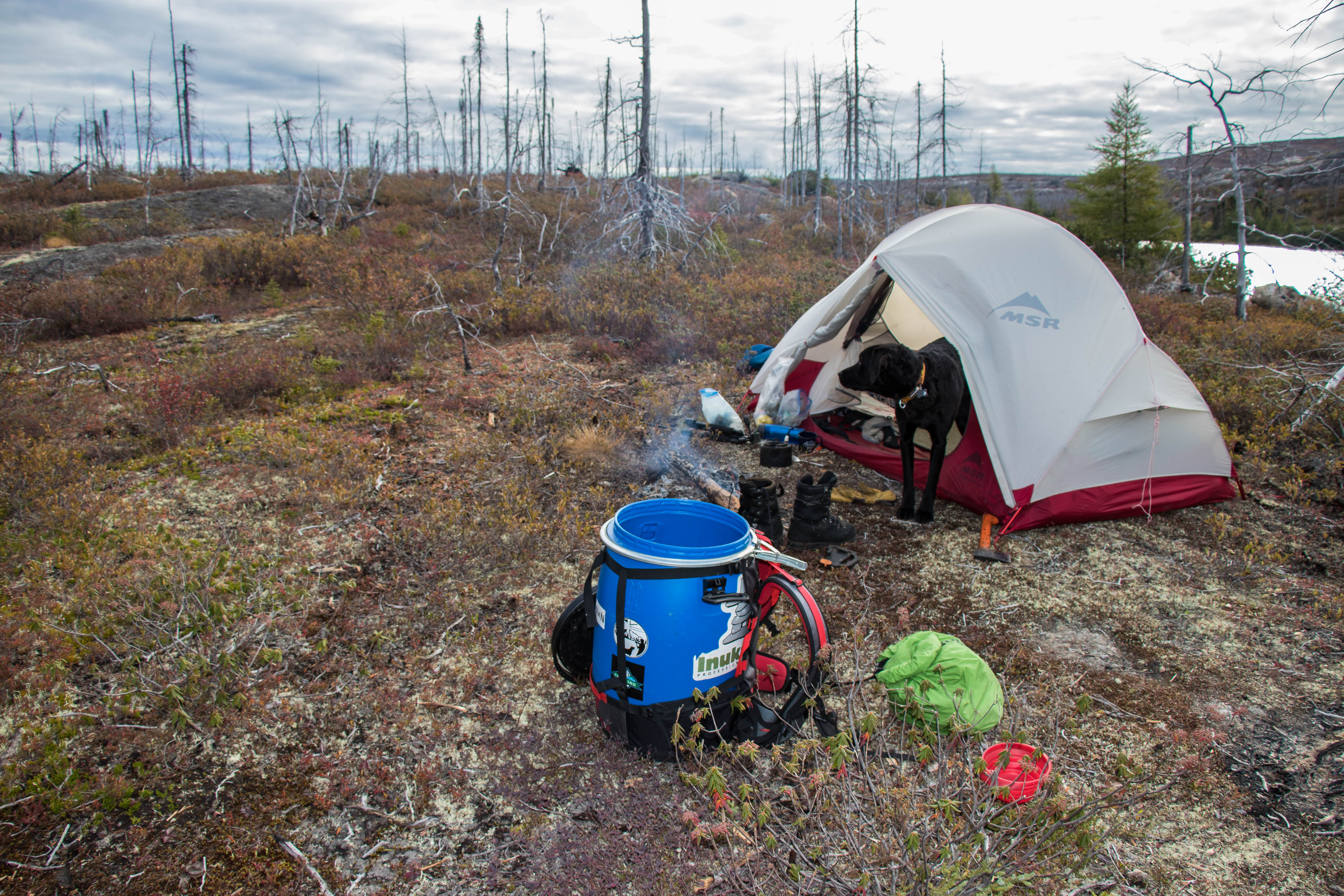 In early October, as V-formations of Canada geese began flocking south, a six-day wind storm raged with gales topping 125 kilometres per hour and never sinking below 60 km/h. It roared so loudly I could hardly sleep, feeling as if my tent was inside the engine of a Boeing 747. Waves rivalled that of the Atlantic Ocean, which I was all too familiar with growing up on Newfoundland’s rugged eastern coast, and vicious snow squalls came and went regularly.

From there, temperatures plummeted to -25 C. Paddling stationary during the day in double-digit negatives became numbing. Midday fires were a must to avoid hypothermia. And shortly after Oct.11, a storm of snow and wind pounded for 36 hours straight, coating the already wintery Earth in 30-plus centimetres of white stuff. Breaking through thickening shoreline ice to find camp and land was becoming the norm. In an attempt to shortcut across Caniapiscau peninsula and escape the wind, we finally struck an inch of ice that covered all but a bull’s-eye in the middle of a large pond. Ahead through the string of lakes as far as the eye could see, this scene continued. 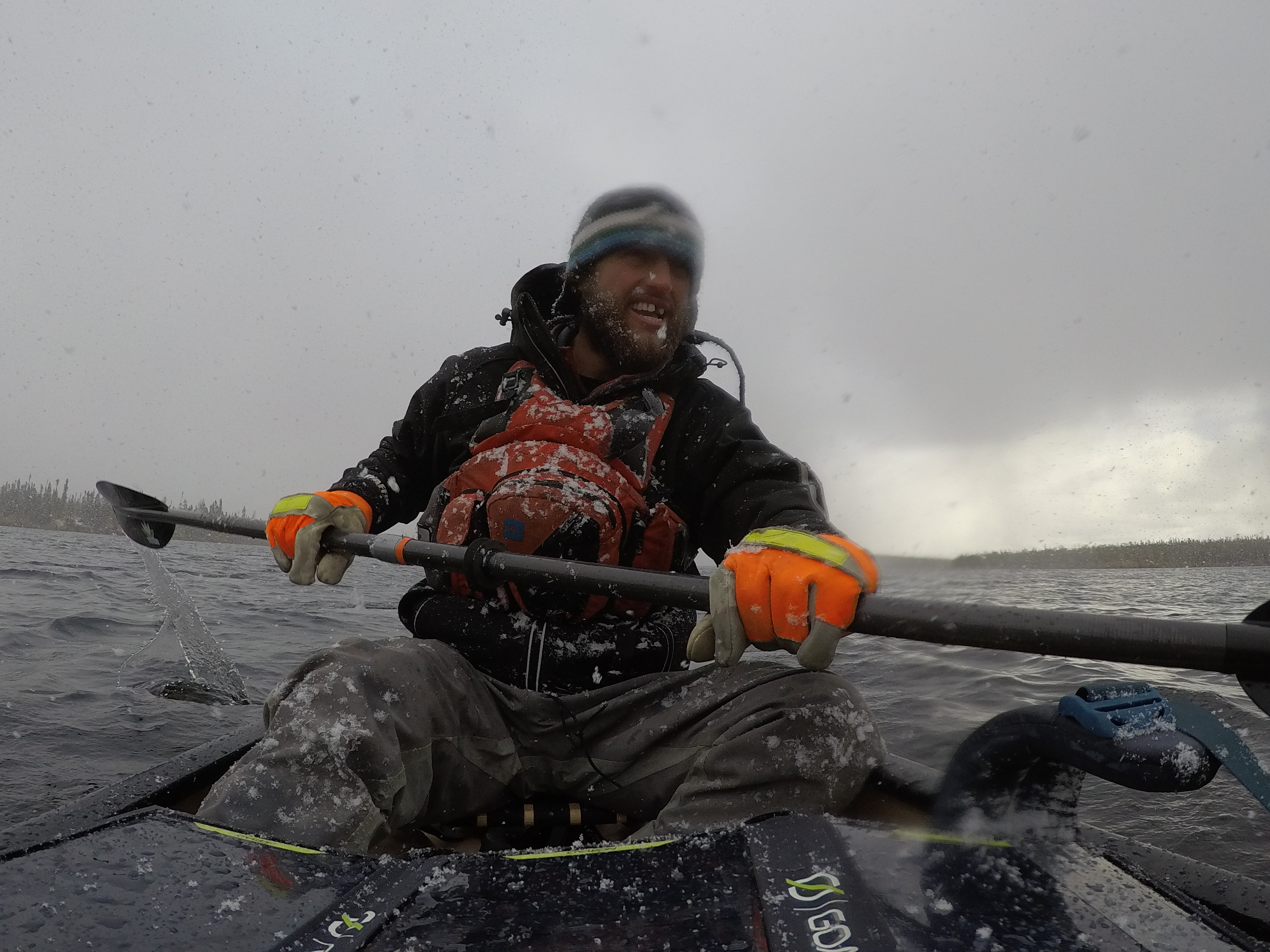 That was the last straw. More than 200 kilometres away from our downriver descent to Hudson Bay, lacking winter safety gear and with freeze-up bearing down (although healthy in mind and body, with Saku still moving freely and happily), I had to make one of the most difficult decisions of my life: Jack Frost forced me to lay the adventure to rest. Falling a couple weeks behind schedule because of the wind combined with what is being called the “earliest onset of winter in western Labrador in many years,” was a dangerous combination, and I understood that.

A few calls later on my Spot Global Phone and an evacuation plan was put in place. Being some 250 kilometres from the city and unable to be plucked by float plane due to the premature arrival of winter, a chopper pickup from a nearby snow-capped mountain was our only way out.

We waited four days through continual snow, sub-zero temperatures and uncontrollable delays of mechanical issues and low ceilings until we could be reached. On the final morning, while waiting from our vantage point — a view that hinted limitless entrancing wilderness — I absorbed the last few moments of the unknown magic and thrill that had lured me here in the first place. From afar, I heard the shrill whipping of propellers. 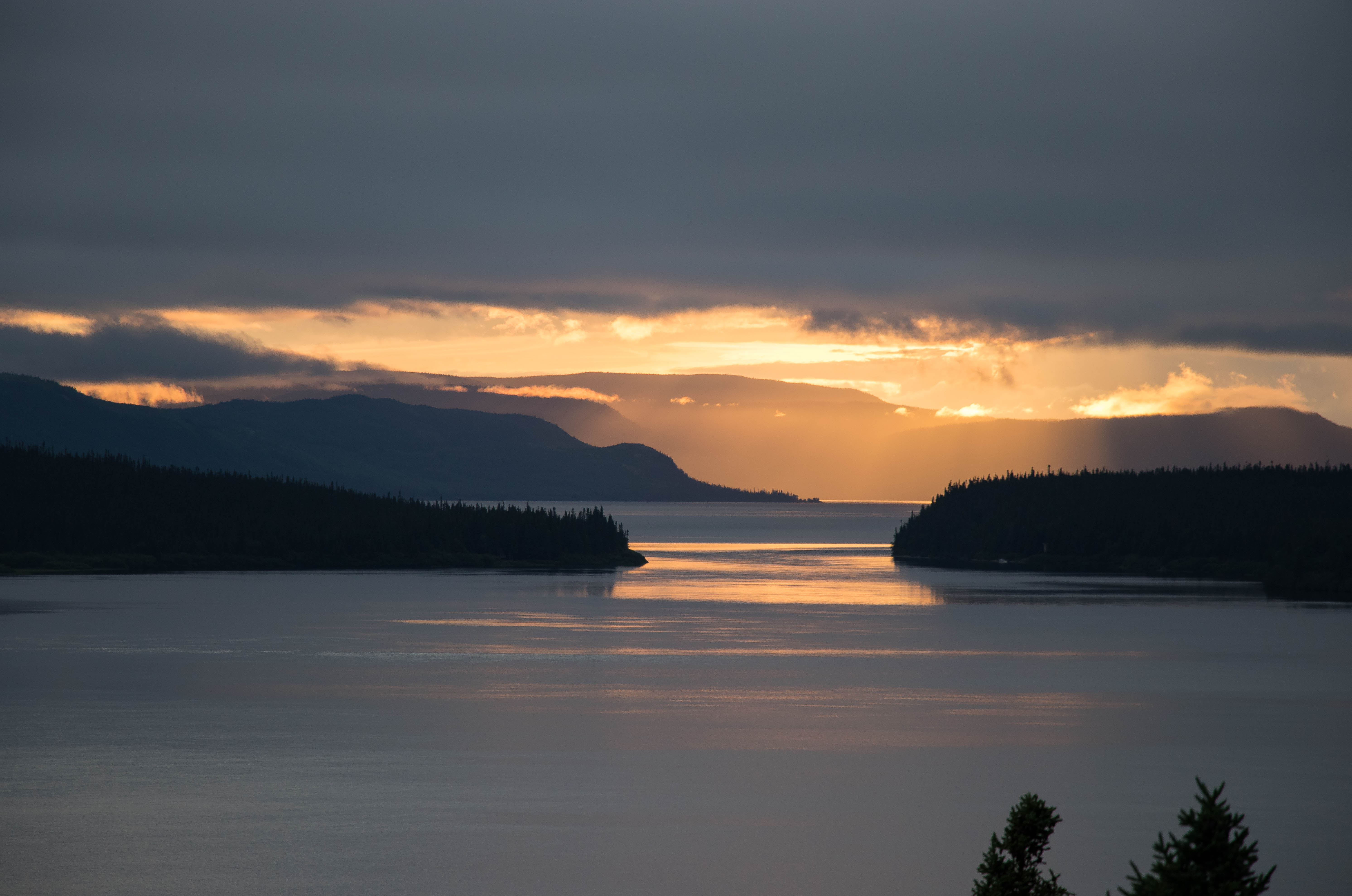 Overlooking the route in late July, one day before beginning the expedition in North West River, N.L. (Photo: Justin Barbour)

It’s important to know that we did not complete the journey. Though some might call it a failure or a defeat, I see it much differently. Of course, the odds were against us, as is often the case in life. But rather than fear the barriers, I chose to pursue a dream exploration. In return, I satisfied my insatiable desire to get out there and see, hear, feel, smell and taste what most other humans never will.

It wasn’t until the final days of the expedition that I realized something very important. By focusing hard on Hudson Bay as the endpoint, we had slowly tackled 993 kilometres across the width of Labrador — an achievement I could not have imagined a year prior. By setting the bar high and falling short of my projected goal, I instead accomplished something just as valuable and important: A self-propelled crossing of Labrador’s mainland portion, giving me the right to say that I have seen a large sample of the vast wilderness Newfoundland and Labrador has to offer. I now truly understand how lucky we are to have this world-class wilderness in our own backyard and I am beyond proud to say that.

I now relish simple pleasures. Enjoying hot coffee, steaming oatmeal, a roaring campfire and a book while overlooking a spellbinding evening landscape is indescribably satisfying. It’s an earned reward like this, after a brutally hard day navigating the bush, that fills my soul. This experience can only be had in places like the long stretching woods and waters that surround us. I don’t believe it can be found anywhere else. 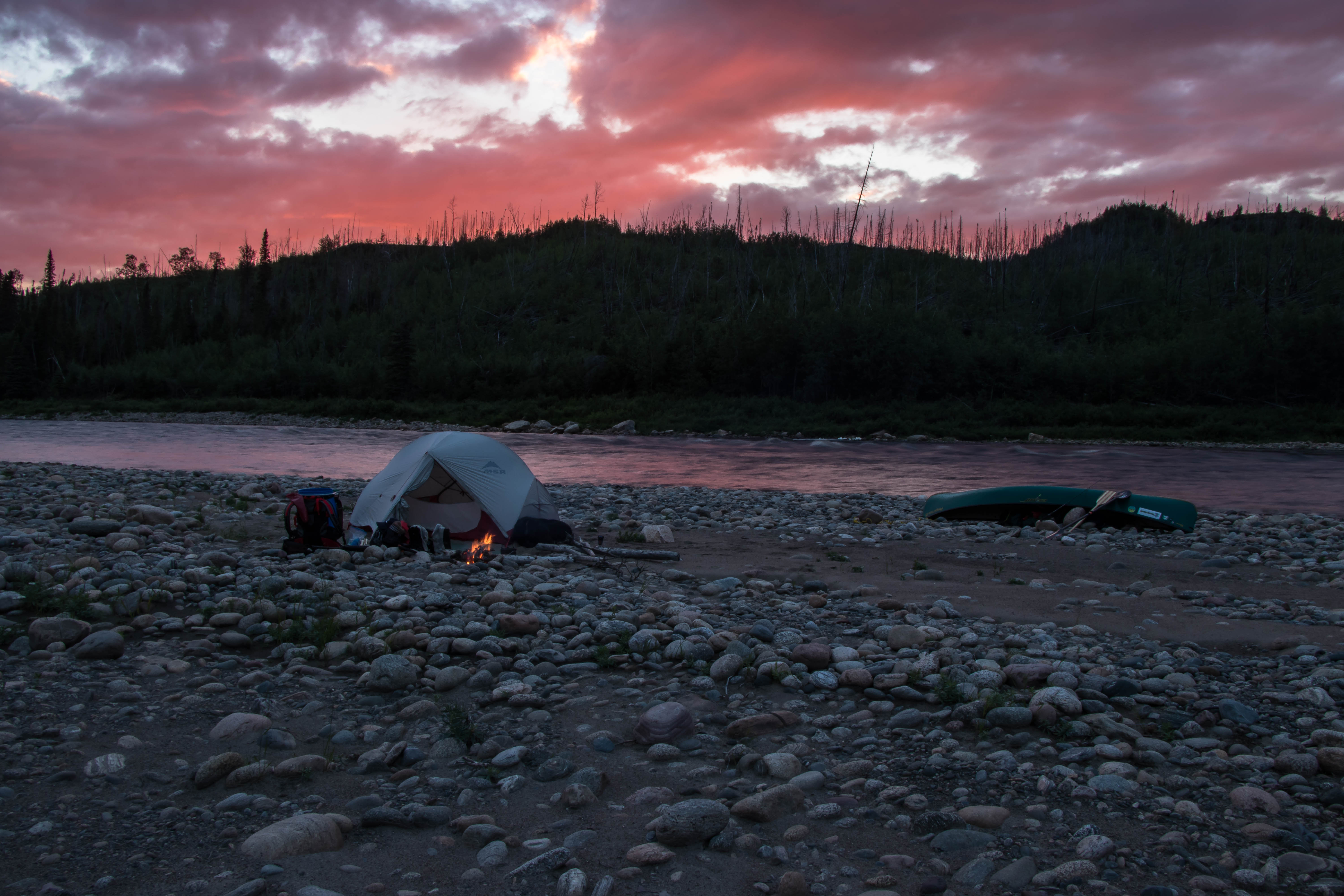 Evening camp on the Red Wine River in early August, one week after the expedition began. (Photo: Justin Barbour)
Man and Dog: Across Labrador Peninsula is one of 11 expeditions supported by The Royal Canadian Geographical Society in 2018. Read more about the expedition on ​Facebook, Twitter and Instagram.