How the RCMP uphold the law on the sea

As the RCMP celebrates its 100th anniversary, ride along with the force’s little-known West Coast Marine Services division
By Jill Heinerth
May 11, 2020

RCMP constable Mike Reid has just changed out of his uniform at the end of a seven-day patrol when his phone rings. It’s 8:30 p.m. The call to his Prince Rupert, B.C., office is about a man with life-threatening injuries at a residence in the small
community of Kitkatla, about 45 kilometres to the southwest. Instead of flying home, Reid puts on his duty belt and foul-weather gear to take an investigation team in a 5.4-metre-long, open-deck, rigid-hull inflatable boat, or RHIB, across the dark, unsettled waters.

In Kitkatla, two coastal detachment officers rush to the scene, calling in an air ambulance for the gravely injured man, but the 34-year-old victim quickly succumbs to his injuries. A single officer now detains a homicide suspect at a tiny community jailhouse, while the second officer secures the scene. A crowd gathers beyond the police tape, but neither officer can leave their post or respond to questions until Reid and the other officers arrive.

When they do, they provide support and launch an investigation that will be handed off to the North District’s major crime unit. There is never a question of whether the RCMP will get to a scene. It’s a matter of how quickly. Along British Columbia’s coast, where many towns and villages are accessible only by boat or plane, and adventurous boaters ply the bountiful, emerald waters, passing fly-in fishing lodges and reclusive cabins nestled in quiet coves, that’s not a simple matter. In this region, however, it is the responsibility of the RCMP’s little-known West Coast Marine Services division.

This tight-knit group of just 20 law enforcement officers, two engineers and two administrative staff police a 95,000-square-kilometre area, including two international borders, 27,000 kilometres of shoreline and a population of four million people. The West Coast Marine Services’ mandate is broad. The 20 members, as the RCMP calls them, rotate in and out, a week at a time on three crews, enforcing the criminal code, the Canada Shipping Act and border control between Washington State and Alaska. They may also support officers temporarily living in coastal villages such as Klemtu (226 kilometres south of Prince Rupert), provide vessel safety inspections, perform joint operations with Coast Guard search and recovery or do outreach through school visits and community events. 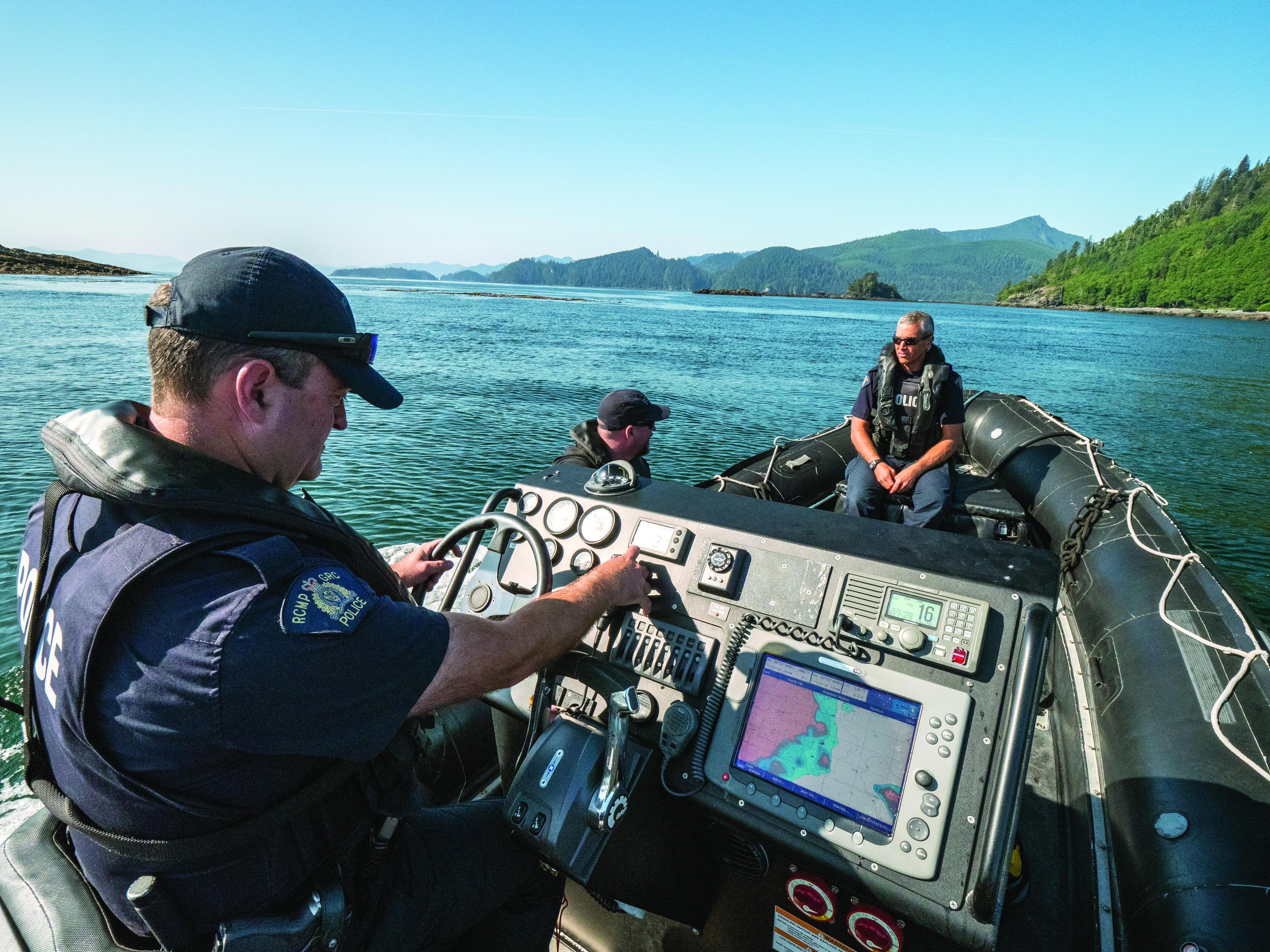 Law enforcement on the water requires multiple talents. Most of the service’s members have 10 to 15 years of general RCMP duty before they apply for a “safe patrol,” where they ride along with the service for a week of orientation and assessment. Each officer must be prepared to crew and operate any one of 96 watercraft, such as an RHIB, a cabin cruiser or a live-aboard catamaran, part of the inventory in communities along the coast. In one week, an officer might also drive a forklift, an RHIB, a motorbike or a quad, then cook a meal, repair a vessel’s electrical system or fight a fire.

At times, they travel by dirt bike to warn off-the-grid homesteaders of an approaching forest fire or fly with Department of Fisheries and Oceans officers to surveil salmon poachers. They may provide security during a pipeline protest or transport the prime minister to a remote community. In all cases, they serve as mediators, educators and protectors, preferring
to give out a business card rather than a ticket. Many of the communities they serve are mostly Indigenous, and each year, Indigenous leaders review and execute a letter of expectation with the RCMP so traditional practices and governance are honoured and supported in each village. Marine services officers must work well as a close-knit team with the communities they support.

Every shift brings fresh challenges. The latest tour of the patrol vessel Inkster, a robust but aging 20-metre aluminum catamaran that acts as a floating home base for the service, included responding to a fatal crash of a Cessna 208 Caravan
on uninhabited Addenbroke Island, about 100 kilometres north of Port Hardy. Officers watched for aggressive grizzly bears potentially looking for an easy meal in the rainforest canopy of cedar, spruce and fir. Five survivors and four deceased were
pulled from the wreckage, hoisted onto a Cormorant helicopter for evacuation to Port Hardy. When the Transportation Safety Board arrived, the service’s officers helped with the investigation by talking to the owners of the floatplane, gathering
evidence and documenting the poor weather conditions that preceded the crash, while the Inkster served as a logistics platform. 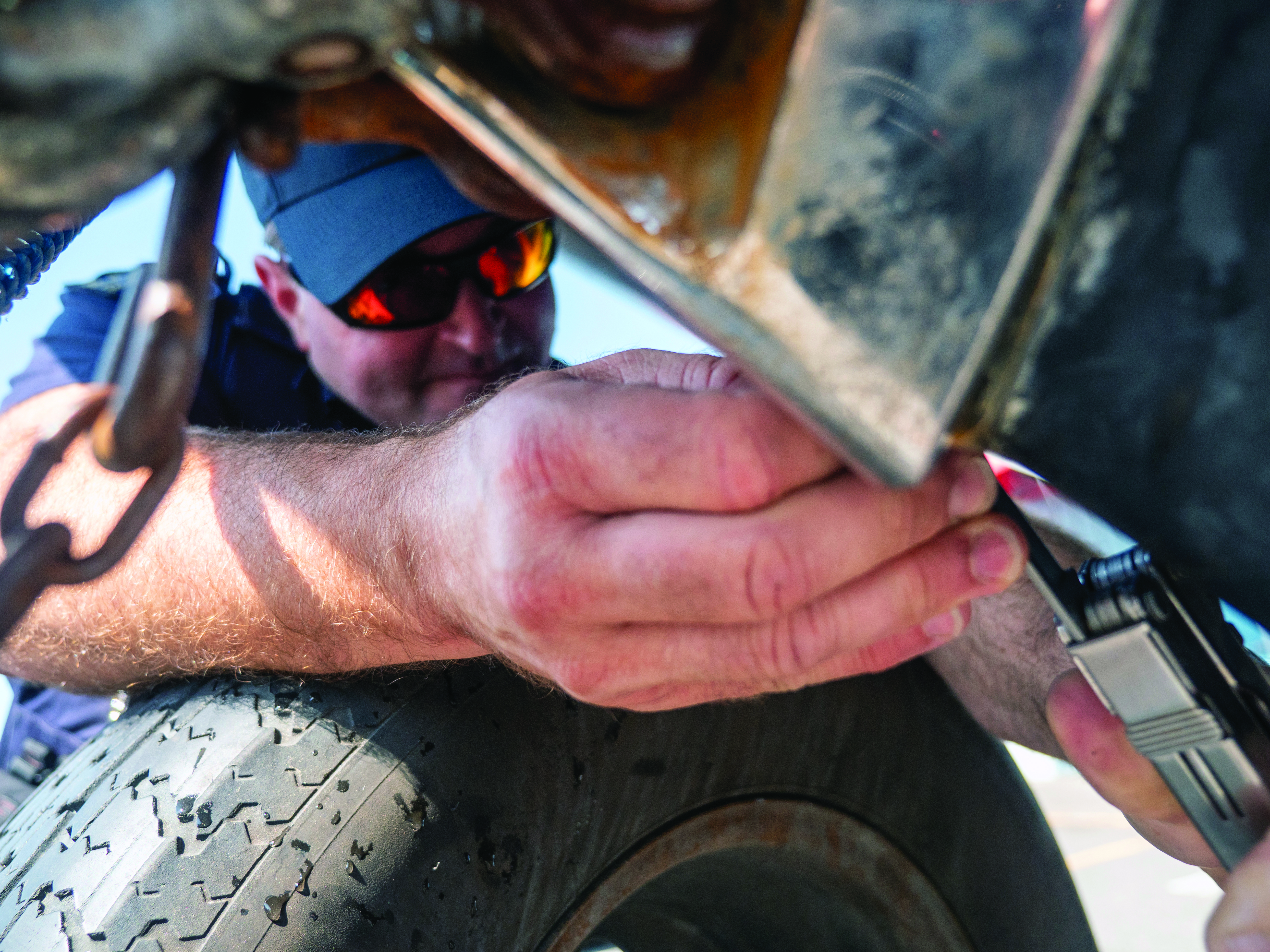 For boat skipper corporal John Stringer, such weeks begin after an eight-hour commute from his home in Salmon Arm to a nondescript industrial building in Nanaimo. Even after 38 years on the job, the stalwart, affable man is eager to get to work. Behind the building’s giant roll-up door, there’s already a flurry of activity. At zero-seven-hundred hours, Stringer dispatches his two crewmates to get ready for their week-long patrol, which can cover some 3,200 kilometres of coastline. They pack
their gear, repair broken equipment and launder bedsheets. At a morning briefing, 10 officers and two civilian support staff hand off reports that need follow-up and review the logistical plans for the patrol.

It starts with Stringer and constables Reid and Russ Warren flying north to Bella Bella to swap with Inkster’s outgoing crew. Upon arrival, Reid and Warren spring into action, transferring hundreds of kilograms of equipment from truck to plane to
pickup to RHIB, then ultimately to Inkster. At sixteen-hundred hours, the pair rendezvous with an RCMP floatplane to support a joint operation with DFO, leaving Stringer to prepare Inkster to move to the community of Klemtu.

Simply tying up at the dock is an important symbol of support in this small, water-access-only village. In the late evening, the three-person crew walks the town, sometimes joining in on impromptu basketball games or giving out stickers to kids.
They remain on call overnight. If they’re lucky, the radio will stay silent, and they can begin the logistical dance all over again at dawn.

Constable Dale Judd from Haida Gwaii’s Queen Charlotte detachment recalls a particularly memorable call from his six years of work with the marine service. Boaters near Bella Bella reported seeing a de Havilland Beaver aircraft careen into the foggy wooded shoreline at low tide. Inkster and a nearby Coast Guard ship scrambled to reach the scene from 15 nautical miles (about 28 kilometres) away.

Upon arrival, RCMP members triaged four severely burned victims on Inkster’s deck. As masters of logistics, Judd and his team quickly fetched vacationing physicians from a nearby fishing charter, bringing advanced emergency medical care to the victims. After stabilizing them, the two most severely injured were taken out by medevac. Had Inkster not been in the right place at the right time, the rising tide might have swallowed up the plane and its trapped passengers.

From investigating serious crimes to helping disabled vessels or chatting with kids on skateboards, Reid says he loves his work. “I enjoy being able to see how people live. I love the history here. Whether I am talking to an Elder in the village or a greenhorn fisherman, being on the water makes people happy. Talking about the beauty of this place breaks down barriers and opens a conversation.”

As he watches whale blows from Inkster’s wheelhouse, Stringer adds, “emergencies in a marine setting can be very intimidating. Bad weather can turn small problems into full-blown emergencies. That is where we shine.”

Given the environment in which it works, the West Coast Marine Services is hard on gear, and things inevitably break. One of the service’s three floating home bases, P/V Inkster, is due for replacement soon, so power supplies break, bilge pumps falter and sometimes the radar goes out just when the crew reaches low water in a tight channel. Technical aptitude and expertise are therefore essential for the service’s officers. Without hesitation, they grab a wrench or break out charts and calipers to plot their navigation. On one morning in Prince Rupert, the service’s constable Mike Reid had to make an unplanned run to the hardware store to pick up a tube of quick-cure marine epoxy to patch a hole in a rigid hull inflatable boat. An hour later, after careful troubleshooting, he was off the dock and heading back to Inkster.