Public health measures aimed at slowing the spread of COVID-19 have also reduced transmission of flu — but this is not the year to blow off your annual flu shot
By Brian Owens
October 18, 2021

A funny thing happened last year just as the COVID-19 pandemic began sweeping across the world — the flu disappeared. What had been a fairly serious flu season in the northern hemisphere ended abruptly, while the southern hemisphere season, which usually ramps up as the northern one winds down, never really got going.

“We saw flu essentially go away in our surveillance network,” says Dr. Melissa Andrew, a geriatrician and flu researcher at Dalhousie University in Halifax. “And that was true across Canada and around the world.” It’s not a coincidence — right around that time is when we started taking precautions that we know are effective against infectious diseases such as the flu: washing our hands, wearing masks, keeping our distance from other people in public and spending a lot of time alone or with just our immediate families.

“Flu is a respiratory pathogen that is transmitted in many of the same ways as COVID-19, so the public health measures to reduce the transmission of COVID-19 played a role in reducing the rate of influenza transmission as well,” says Dr. Matthew Miller, a virologist at McMaster University in Hamilton, Ont.

As those public health measures have continued as the pandemic drags on, so too have their effects on the flu. In fact, the 2020-21 flu season essentially never happened, according to the Public Health Agency of Canada. “To date this season, there has been no evidence of community circulation of influenza despite continued testing above seasonal levels. Influenza activity has remained below the threshold required to declare the start of the 2020-21 influenza season,” the agency told Canadian Geographic in April 2021 — a month that would usually mark the beginning of the end of the flu season in a normal year. 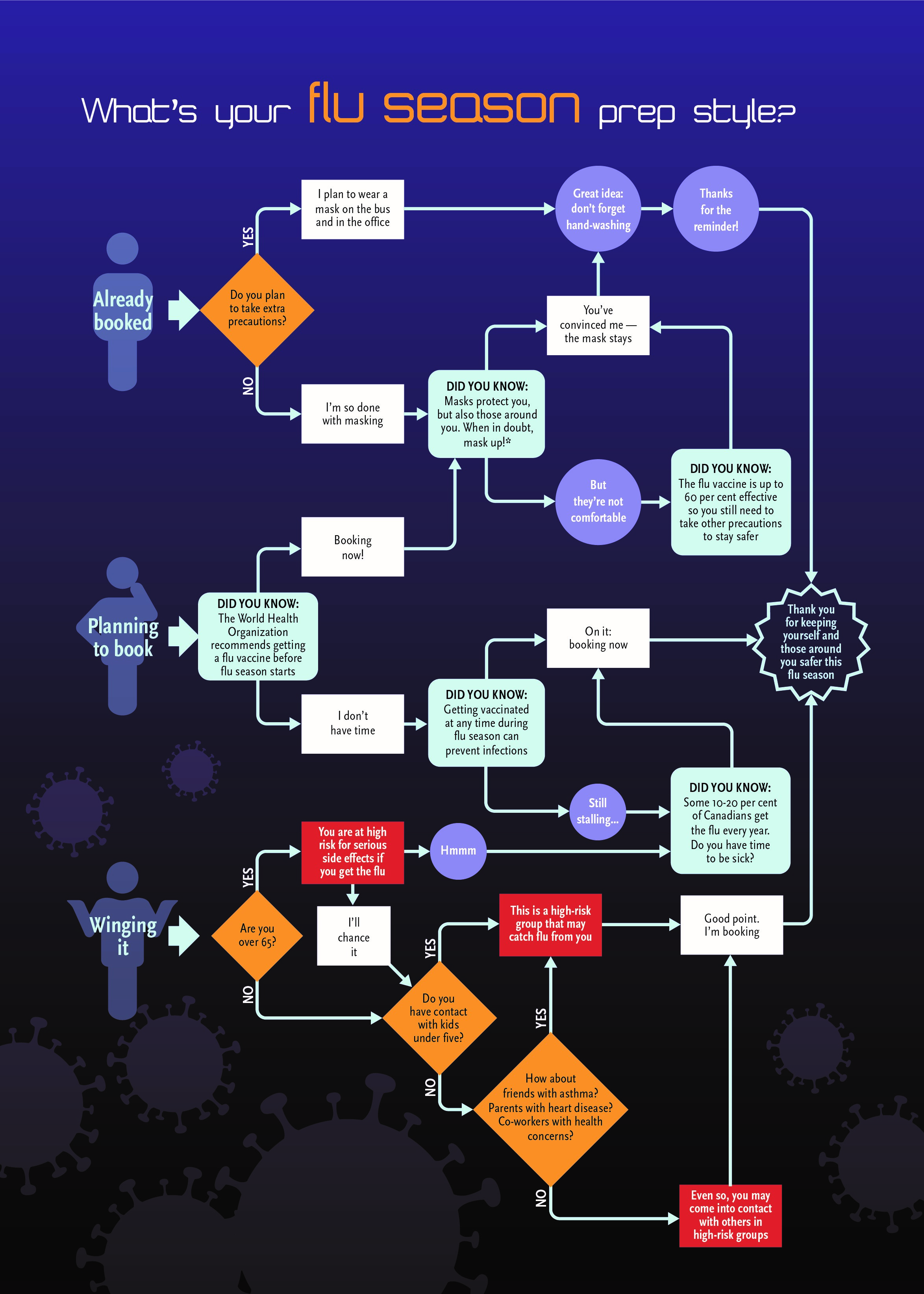 The national health agency attributes the missing flu season to both the continuing COVID-19 precautions and the immunity offered by the seasonal flu vaccine. In the 2019-20 flu season, just 42 per cent of Canadians got a flu shot, well below the national target of 80 per cent. But in the fall of 2020, public health authorities dramatically ramped up messaging campaigns encouraging people to get the shot, emphasizing that keeping flu numbers low would be a good way to reduce pressure on health-care systems already stretched by the pandemic. While national numbers on flu vaccine uptake for the 2020-21 season will not be available until later this year, preliminary impressions suggest the campaign was effective. As of Feb. 8, 2021, New Brunswick had distributed 416,920 vaccines, its highest total ever, up from 320,380 the previous year. And in British Columbia, community pharmacists administered 1,064,769 doses of influenza vaccine in 2020-21, up from 724,256 doses in 2019-20, while physicians, nurse practitioners and registered nurses in community practices administered 259,757 doses in 2020-21, compared with just 42,374 doses in 2019-20. “Anecdotally, it seems there was a lot more interest in getting the flu vaccine this year,” says Dr. Andrew. “There were shortages in Nova Scotia because there was more uptake.”

Indeed, a survey in May 2020 of 4,501 Canadians over the age of 50 found that the pandemic had significantly increased older adults’ willingness to receive the flu shot. The study, published in the journal Vaccines, was conceived by a cross-disciplinary research team from three Canadian universities. It reported that some 20 per cent of 1,001 research participants aged 50 to 64 said they had not intended to get a flu shot for the 2020-21 flu season but the COVID-19 pandemic had changed their minds. Of these respondents, 92 per cent had not been vaccinated against influenza the year before. Of the 3,500 participants aged 65 and older, eight per cent had not originally planned to get a flu shot but were now likely to receive it.

While the success of flu vaccine campaigns and the low flu numbers are good news for most of us, they are making decision-making trickier for the people tasked with deciding which kinds of influenza virus to include in future versions of the vaccine. Most flu vaccines contain four different strains of flu virus. The World Health Organization monitors which strains are circulating around the world and uses that information to predict which ones are likely to be most common over the next year, so they can be put in the next season’s vaccine. But over the past year, researchers have had very little information to work with. Despite doing far more tests than usual, there was very little flu to find. “The lack of flu makes an accurate prediction of which strains to include in the vaccine very challenging,” says Dr. Miller.

The WHO made its recommendation on which strains to include in the 2021-22 northern hemisphere vaccine back in February, based on what it had seen in the tiny numbers from the southern hemisphere season last summer. Just one of the four strains was changed from the previous version of the vaccine, indicating that the strains in circulation will likely be mostly the same ones that were seen before the pandemic. It’s a reasonable assumption, since the small number of infections means the viruses have not had much opportunity to mutate into new strains. But it’s also a gamble. If a new strain did arise but was missed, the vaccine may not provide as strong protection.

Though vaccines for COVID-19 are now rolling out quickly, it’s likely that at least some of the public health measures to control the virus’s spread will remain for the foreseeable future. Many of those strategies, such as working remotely and wearing a mask when there’s a risk of transmission, have become more normalized and may stick around even after the pandemic has passed. That’s why Dr. Miller says, “We might still see a relatively blunted season in 2021-22.”

But that doesn’t make the seasonal flu vaccine any less important. It’s unlikely that we will be completely out of the woods when it comes to COVID-19 this winter, so the rationale for getting a flu shot to help reduce the pressure on hospitals still stands. And even if the numbers of people in hospital due to COVID-19 itself are low, hospitals will still be under more strain than usual as they work through the backlog of postponed surgeries and treatments that has built up during the pandemic. “It’s a high priority to make sure we have high flu vaccine uptake to keep the pressure off hospitals,” says Dr. Miller. It’s also a high priority to build on the momentum for flu vaccines to keep more vulnerable populations safer.

There is a danger that a couple of mild flu seasons could lead to a big rebound in future years as our natural population immunity slowly wanes without new infections to replenish it. But the flu is an unpredictable virus at the best of times, so there’s no telling what will happen once we wind down our pandemic precautions. “There’s a saying that if you’ve seen one flu season, you’ve seen one flu season,” says Dr. Andrew. “So there’s not much we can do but continue to protect ourselves as best we can.”

Learn more about the impact of seasonal flu and test your flu knowledge with Can Geo’s digital interactive.