When solving a jigsaw puzzle, you first set the corners in place, then the edges, all while scheming how to fill in the middle. The Dominion of Canada came together in a similar way, and the key cornerpiece was British Columbia. Adding the province established the basis for a coast-to-coast country, whose quilt of intervening territories was eventually sewn together with the thread of a transcontinental railway — a promise that sealed the deal for B.C.

The Canada we know today, however, almost didn’t happen. Strong forces wished for B.C. to remain a British colony under the rule of a partially elected, partially appointed assembly — not forced to adopt a fully elected or “responsible” government. Another contingent wanted B.C. to join the U.S., where most of its trade was transacted. But pro-Confederationists benefited from a little luck — and some benevolence from Ottawa.

Founded in 1858 during the Fraser River gold rush, B.C. joined Vancouver Island as one of British North America’s two Pacific colonies. That same year, a man named Amor de Cosmos arrived on Vancouver Island. A Nova Scotian photographer who’d made his way through the California goldfields, he had changed his name while there to Amor de Cosmos from William Alexander Smith to reflect a love of grandiose aspirations. De Cosmos founded The British Colonist newspaper, in whose premiere issue he advocated merging the two Pacific colonies. After that came to pass, de Cosmos helped organize the Confederation League in 1868 to rally support for a union with the newly minted country of Canada. Unsurprisingly, he was up against unelected members of the colonial government who feared for their jobs and pensions. One of these was Governor Frederick Seymour, whose death in 1869 and replacement by union-friendly Anthony Musgrave shifted the debate. The stage was set for B.C. in 1870, when Canada purchased the vast area between the Great Lakes and Rocky Mountains from the Hudson’s Bay Company, and Manitoba and the Northwest Territories joined Confederation.

The Confederation League’s 37 resolutions outlining terms for a union included Canada paying down the colony’s debt, provincial control over education, immigration and land-allocation policies, and the building of a wagon road between B.C. and the East. A delegation delivered the proposals to Ottawa, along with a request to maintain its colonial government. But Canada insisted on a responsible government model; to sweeten the deal, it agreed to pensions for unelected officials who’d be displaced, spotted B.C. three senators and six members of Parliament, and exchanged the swampy wagon road for a rail link to the Pacific. On July 20, 1871, these terms were passed by both the B.C. assembly and Parliament to create Canada’s sixth province. De Cosmos would be its second premier. Sadly, for all their talk of unity, B.C. officials of the time were against land concessions to First Nations, refusing to negotiate treaties or recognize land title, leaving most of the province on unceded land.

The Canadian Pacific Railway was finally completed in 1885, the jigsaw filled in with Alberta and Saskatchewan in 1905. Ultimately, B.C.’s entry into Confederation realized the dream of a “sea to sea” country — a mari usque ad mare — the motto on Canada’s coat of arms. 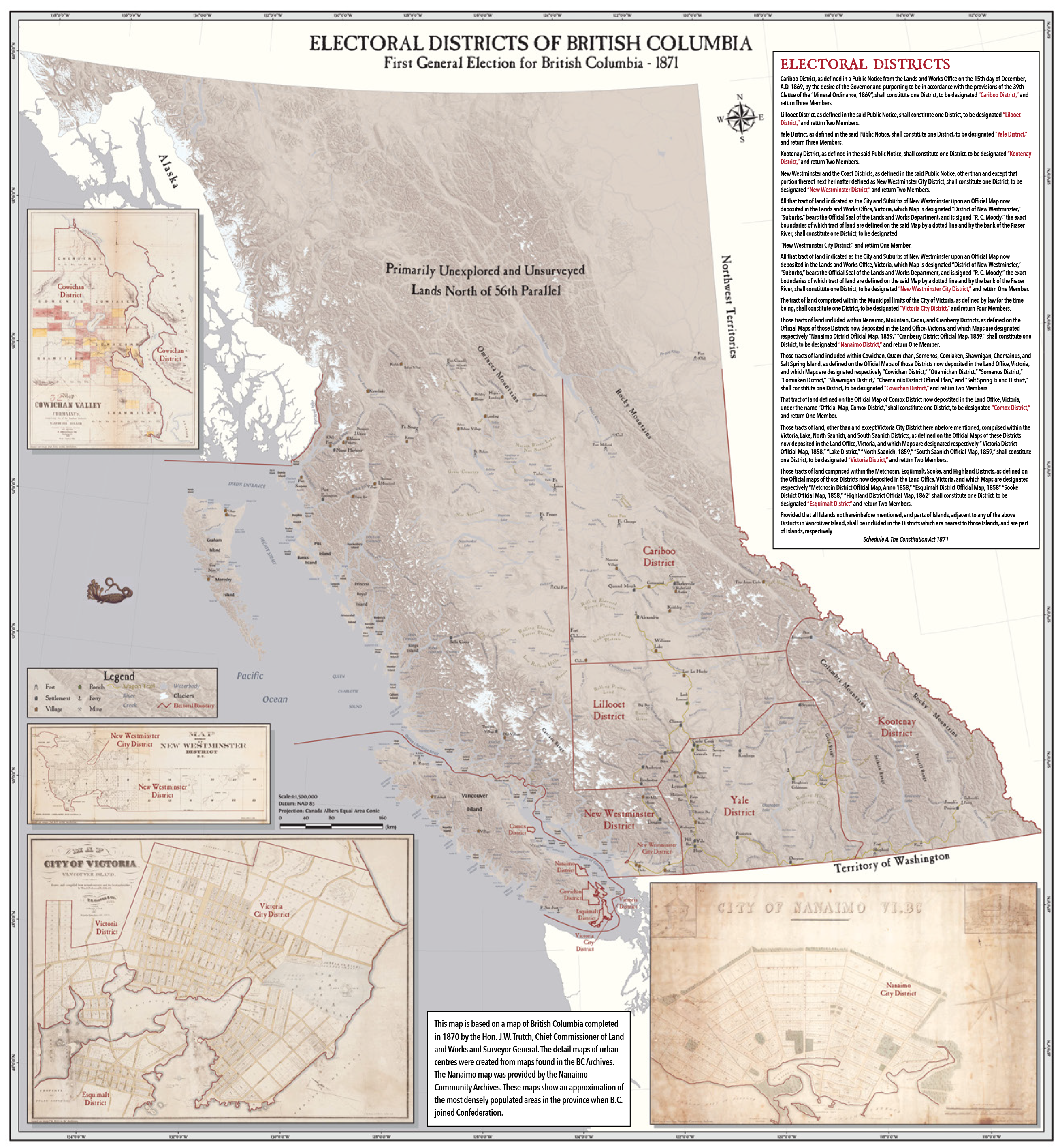 Watch our GeoMinute on how Canada's westernmost province — isolated from the newly minted Dominion of Canada and hemmed in by the U.S. — came to join the confederation.