A Canadian team took the top spot for most fuel-efficient vehicle and another won the Off-Track Communications Award
By Tanya Kirnishni
May 11, 2017

Canadian teams had a good run this year at the Shell Eco-marathon Americas (SEMA) in Detroit, Michigan, which saw 115 teams of high school and university students come together from across the continent in the name of fuel efficiency and friendly competition.

The reigning champions, Université Laval’s Alerion Supermileage team, successfully defended their title of most fuel-efficient custom-built vehicle. They placed first in the gasoline prototype category, with a fuel efficiency rating of 1,153 kilometres per litre – more than 400 kilometres per litre ahead of the second-place team. This is their second year in a row taking the top spot and they have a long track record of previous wins. Although Laval hasn’t beaten their own record of 1,525 kilometres per litre, set in 2013, they did improve on their score from 2016.

Another Canadian success story to come out of this year’s SEMA was the University of Ottawa’s Supermileage uOttawa team. For their work in promoting the importance of fuel efficiency, they received the Off-Track Communications Award.

Ottawa’s team made use of both traditional and social media. Whenever they had something interesting going on or made improvements to their vehicle, they shared the news on social media, through Facebook, Instagram and Twitter. They also profiled each member of the team.

“We didn’t enter the communications award because we wanted to win it, but because we thought it was important to promote fuel efficiency,” said Marc-Andre Caron. “We genuinely try to promote what we do and every time we had the opportunity to talk about the project at events, we tried to attend them.”

One of the events the team attended was the Ottawa Gatineau International Auto Show. They also presented their vehicle at the University of Ottawa’s Design Day and reached out to invite local media to attend.

Although their team didn’t place, they did pass tech inspection and got on the track. Undeterred by several issues, including structural problems, the team worked late nights to make modifications. At one point, they completely disassembled the back of their vehicle.

“We ran into multiple problems that we had to fix, and as a team we all worked really hard during the first couple of days to pass tech,” said Caron. “It helps us as future engineers, because we don’t have much time to find what the problem is and fix it. We always got back on track.”

The team succeeded in doing a few laps around the track but didn’t complete a full run to qualify for a fuel rating. Ultimately, it was the unexpected cold weather that proved problematic for their engine.

“Even if we didn’t complete the ten laps required, the team is still proud of what we achieved,” said Caron. “Under pressure, we found even better solutions than we would have just sitting in our lab, because we knew we had to pass tech. Either you do it right or you don’t pass.”

The Ottawa team isn’t taking a break for the summer like most teams, in fact, they will also go on to compete in SAE Supermileage, coming up June 8-9. And for SEMA, they are already looking ahead to next year. They want to ramp up their social media communications, as well as offer tours of their machine shop. The team will also be expanding to have one vehicle competing in the battery-electric category and a second in the gasoline urban concept category.

How other Canadian teams placed: 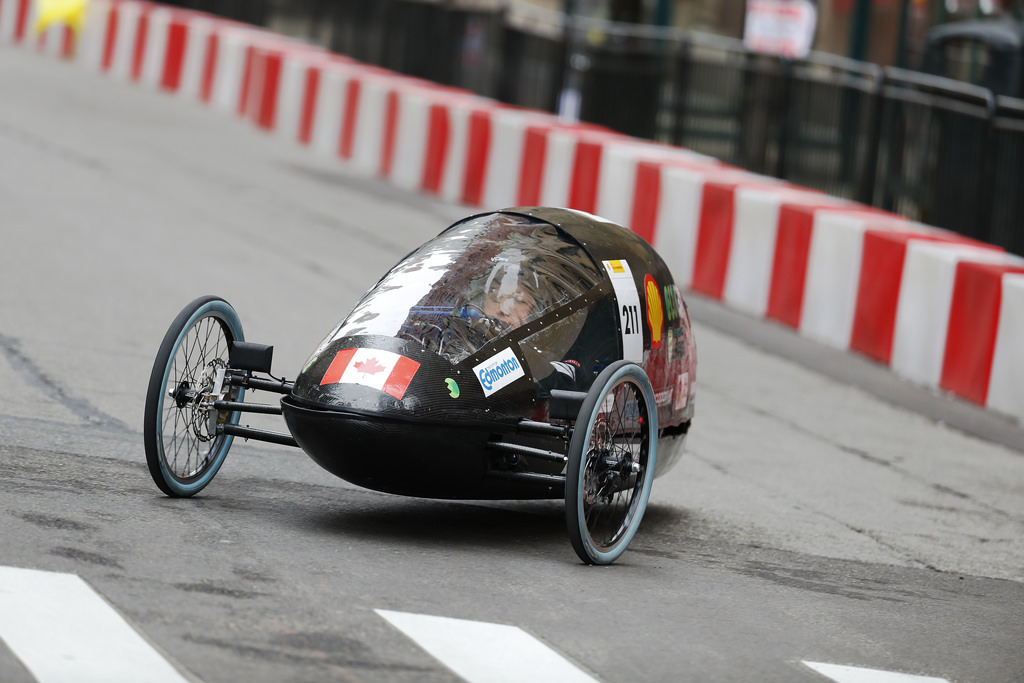 The University of Alberta's EcoCar team goes around the track in their prototype hydrogen fuel cell vehicle. (Photo: Rick Osentoski/AP Images for Shell)

The University of Toronto Supermileage team was unseated from their silver spot and came in fifth place for the prototype gasoline category, with 608 kilometres per litre. Usually considered strong rivals for the Laval team, the Toronto team faced difficulties crossing the border into the U.S. and arrived late, having less time to do tech inspection and make adjustments to their vehicle.

Team Northern from Northern Collegiate, Canada’s only high school team competing in SEMA, passed tech inspection and placed 23rd out of 56 teams in the gasoline prototype category, with a score of 187 kilometres per litre.

To see how other Canadian teams placed go here.