Gregus received the Rising Star Portfolio Award in this year’s Wildlife Photographer of the Year competition. Canadian Geographic caught up with him for the story behind the photos.
By Abi Hayward
October 18, 2021

Photographer Martin Gregus is garnering worldwide attention after winning the Rising Star Portfolio Award in the National History Museum’s prestigious Wildlife Photographer of the Year (WPY) competition. “It's actually a little bit overwhelming,” chuckles the 25-year-old over Zoom video chat. “I've been a photographer since I was eight years old. It’s funny because people are like, ‘He's being discovered.’ But I've been here this entire time!”

Gregus was mentored by his father, Martin Gregus Sr., a photographer and graphic designer, after the family moved to Canada from Slovakia in 2004. “All of a sudden, I didn't have that many friends here. I didn’t really know anybody. I didn’t really speak the language. So I kind of built a relationship with my dad,” says Gregus.

It was also Gregus’ father who encouraged him to enter WPY this year. Gregus had taken a hiatus from competitions (he won the 11-14 age category of WPY in 2010). “I was too scared, almost, to face that rejection of someone saying, ‘your photo isn't good enough.’ As a teenager, mentally it plays with with you a little bit,” he says. "My dad convinced me, saying ‘what you have here is good enough.’”

As it turned out, the collection of photos was indeed “good enough.” 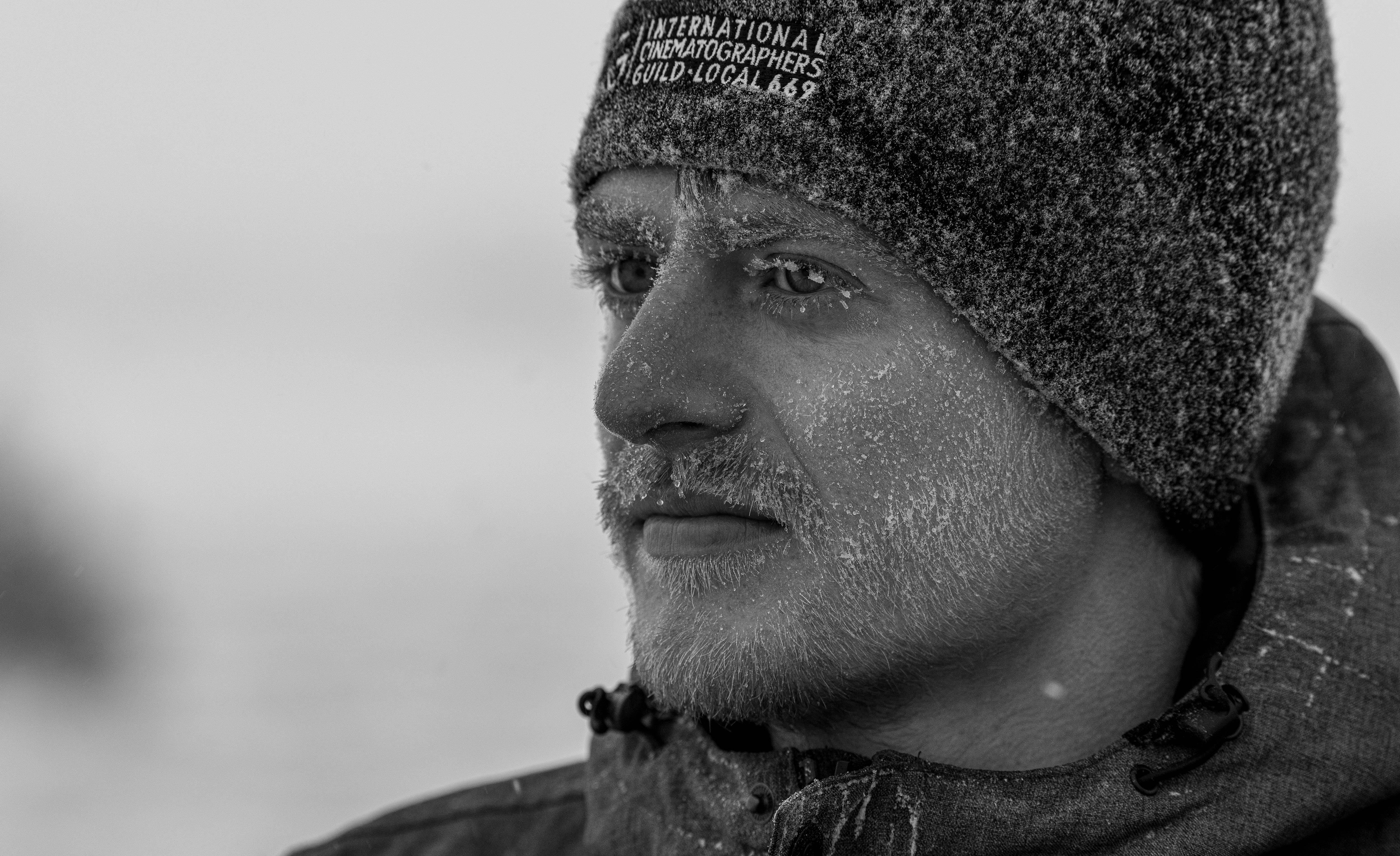 Martin Gregus Jr. has been taking photographs most of his life. ”Stories are everywhere around us,” he says. “It’s just a matter of going out there and capturing them in a different way.” (Photo: Martin Gregus)

The portfolio in question chronicles the summer lives of polar bears on the western coast of Hudson Bay. The photos were all captured on an expedition Gregus made last year.

Most polar bear photography depicts the iconic animals on a backdrop of ice and snow, but Gregus’ photos present a different view of the Canadian Arctic, with the bears bedding down on soft moss and swimming in crystal clear, ice-free waters. He’s also observed a more social side to these nomadic predators. “I've seen 10 polar bears not around a kill, just hanging out. And when there was a kill, I've seen a big male on the kill and moms and cubs going in to eat at the same time.”

From the close bonds between the bears, to the ways they’re adapted to their Arctic environment, the WPY-winning portfolio captures a side of polar bears we don’t often see. Here are the winning images, and the stories behind them (including the nicknames Gregus came up with for the bears). 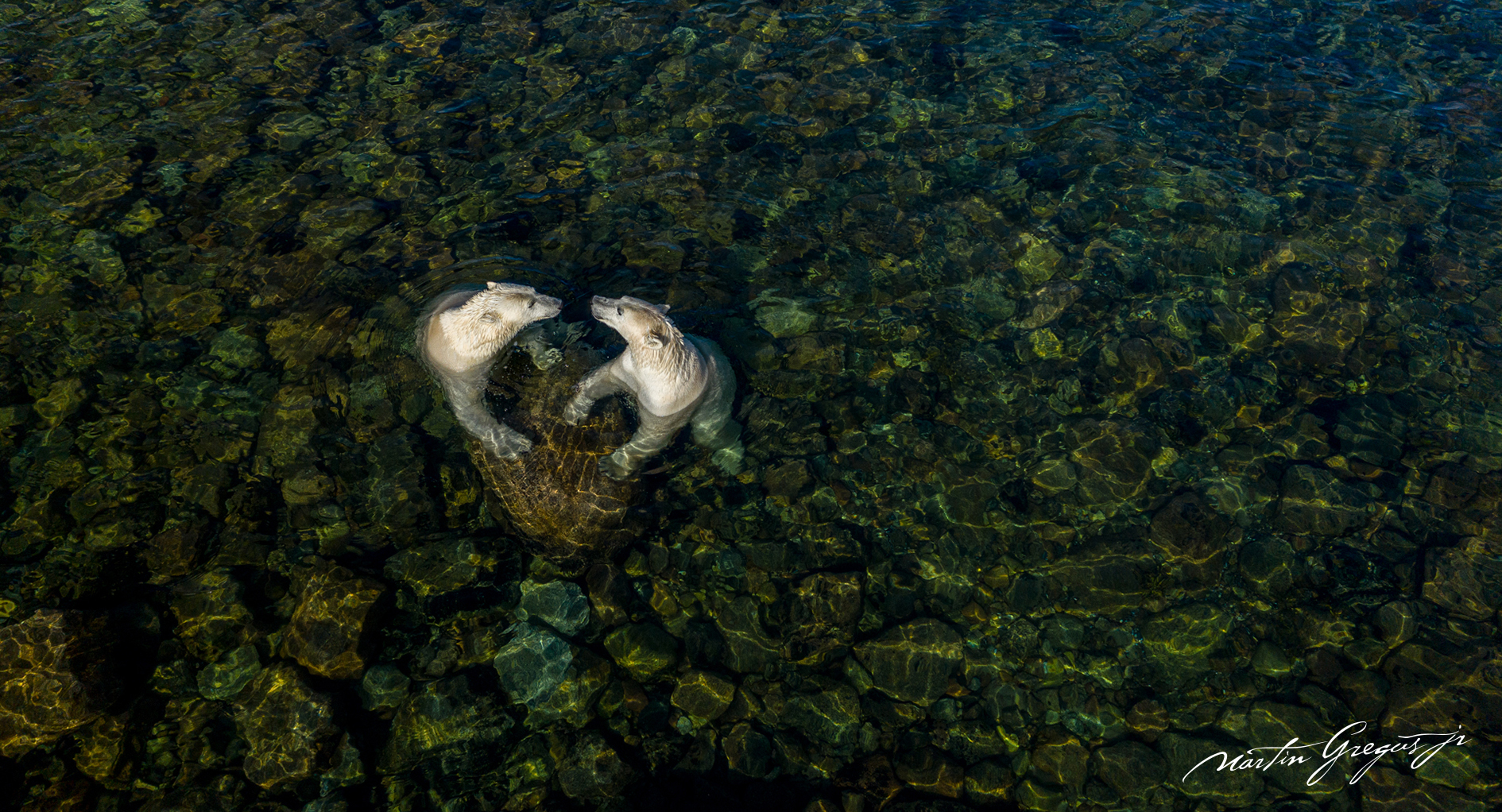 “This is Veronica and Betty, two female bears. I don't know what their relationship is, but I think they’re sisters. They did everything together. They would forage. They would team up to scare other bears. And then one day we saw them swimming way off in the distance. I sat on the top of our camp and I could see them through the binoculars splashing around and I said, ‘Wow, I need to see this.’ I took off with the drone from camp and managed to go right over them and capture them fighting and playing. It was unbelievable.” 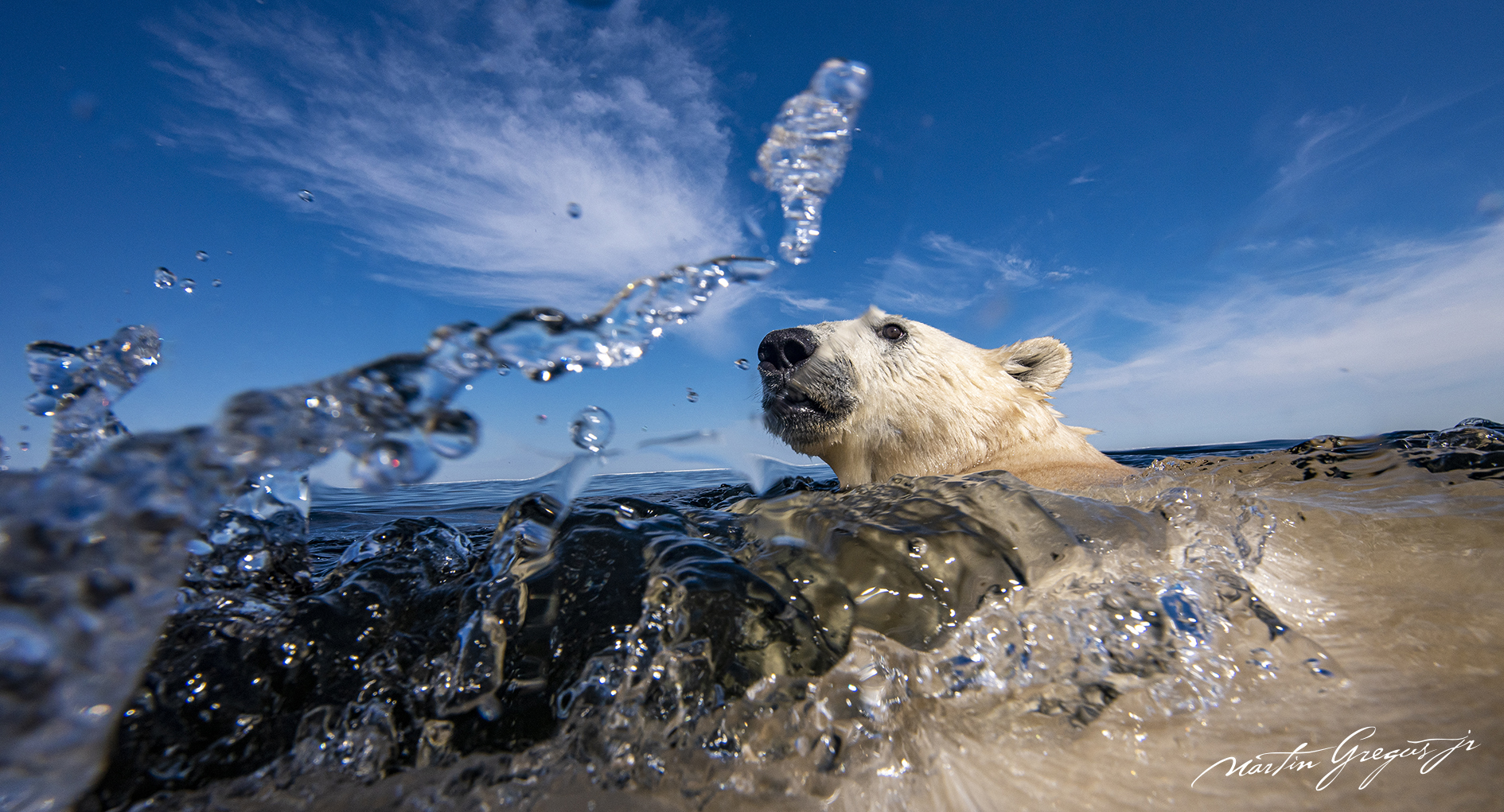 “This is actually my favorite picture of all the pictures that went to London. I remember the moment I captured it — and yet I didn’t capture this image looking through the camera. This was a whole remote control setup that had been in the works for years. Polar bears are really built to swim, and from the moment I first saw bears swimming in 2015 I knew I wanted to photograph it. Dad and I tried to build custom equipment and boats and underwater housings and figure out how to capture it. Of course, everything worked perfectly when we were in town, but as soon as we got onto the open ocean, everything broke. So here I was on potentially my only chance to capture this image. I’d thought about it for six years, I had 30 minutes to do it, and the equipment I was going to use wasn’t working. I thought, ‘Okay, I’m going to take the camera on a long pole, put it in an underwater housing, set it to take a picture every few seconds, and I’m going to position myself in a boat in front of this bear and hope that he doesn’t mind my presence.’ I just stayed completely silent and this bear swam right by; you could hear him breathing the water, he was so close. I had one shot, and I managed to get it. I looked at the screen after and my jaw just dropped. I’m pretty sure I danced on the boat.” 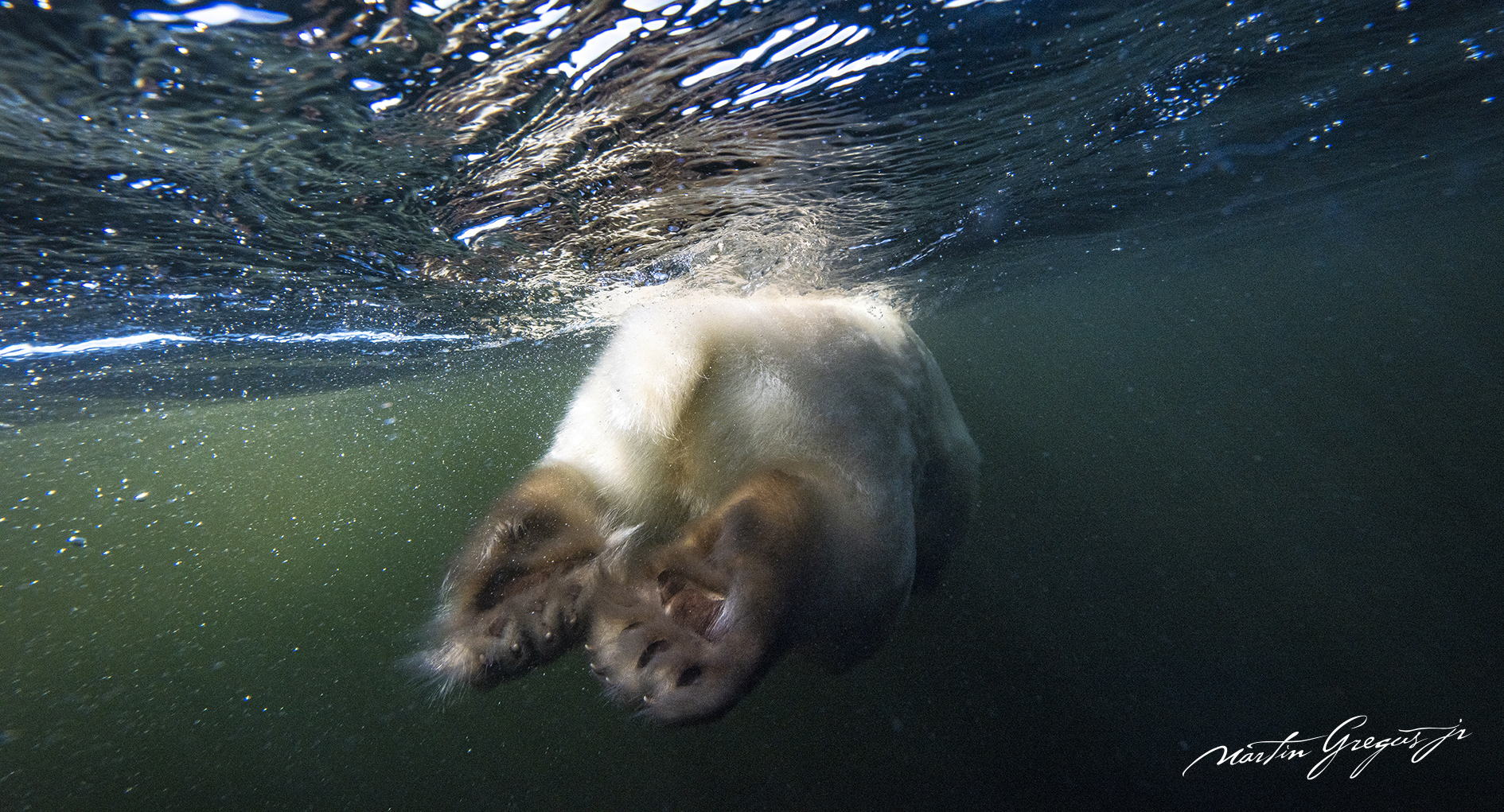 “This is the same bear [as in the previous photo]. After he passed by, I put the camera completely underneath the water to capture him swimming away. I really like this shot, and it was a hard one to capture because Hudson Bay was murkier than usual — it wasn’t that clear blue where you can see 50 feet below you. But we went out far enough into the bay, away from that sedimentation, and we were able to get relatively good visibility.

“This photo shows the uniqueness of this animal and how well it is adapted to its habitat. Polar bears are built to swim; they use their hind legs as a rudder and they propel with their front paws. It was cool watching him maneuvering in the water through this series of pictures.” 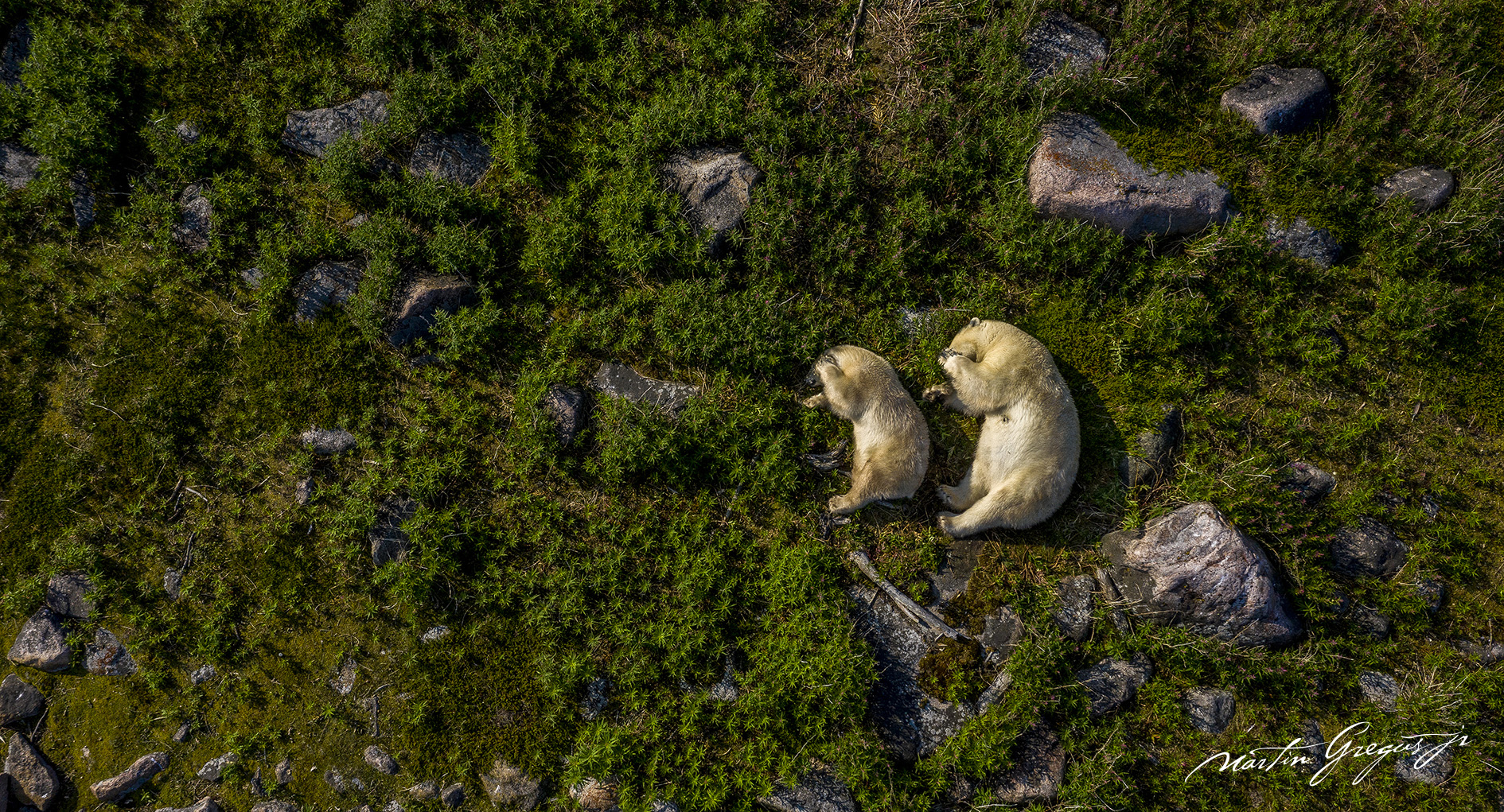 “That's Athena and Hercules. Athena is the mom; Hercules is the cub. The cub is two years old, and it’s hard to see in that picture, but he only has three legs, so he’s missing his hind paw. He just had kind of a little nub. Watching these bears was simply amazing. We were not expecting to see a cub with three legs, let alone a healthy cub with three legs. This cub survived long enough that the wound healed, and he has learned to live with it. He was a lot more comfortable in the water than he was on land because he didn’t need that leg; that was just his rudder and he could do just as well with just the nub and his other foot. So in the water, he was just a regular bear.

“He was really vocal. I've never seen a bear as loud as that one. As they approached, you could hear him coming because he was just like, ‘nggrrhh! nggrhhh!’ It sounded like he was saying, “Moooommmm!” non-stop at literally everything. The mom was so accommodating of his condition. As soon as another bear showed up, even if it was a bear twice her size, she lunged right at it and scared it off.

“I love this picture because I feel like moms and cubs have the same relationship we have with our moms. You know, you love each other, of course, but sometimes you get on each other’s nerves! This bear was so attached to his mom. His disability built their relationship so much stronger and he really copied everything she did. This scene, where she’s lying down covering her face, and he’s doing the same thing and they’re not even looking at each other, just shows the strong bond between them. I love that you can really visually see how connected they are.

“I would have loved to track this bear just to see where he is now. It’s one of those thoughts I have at 2:00 in the morning; I wake up and wonder if something’s happened to him.” 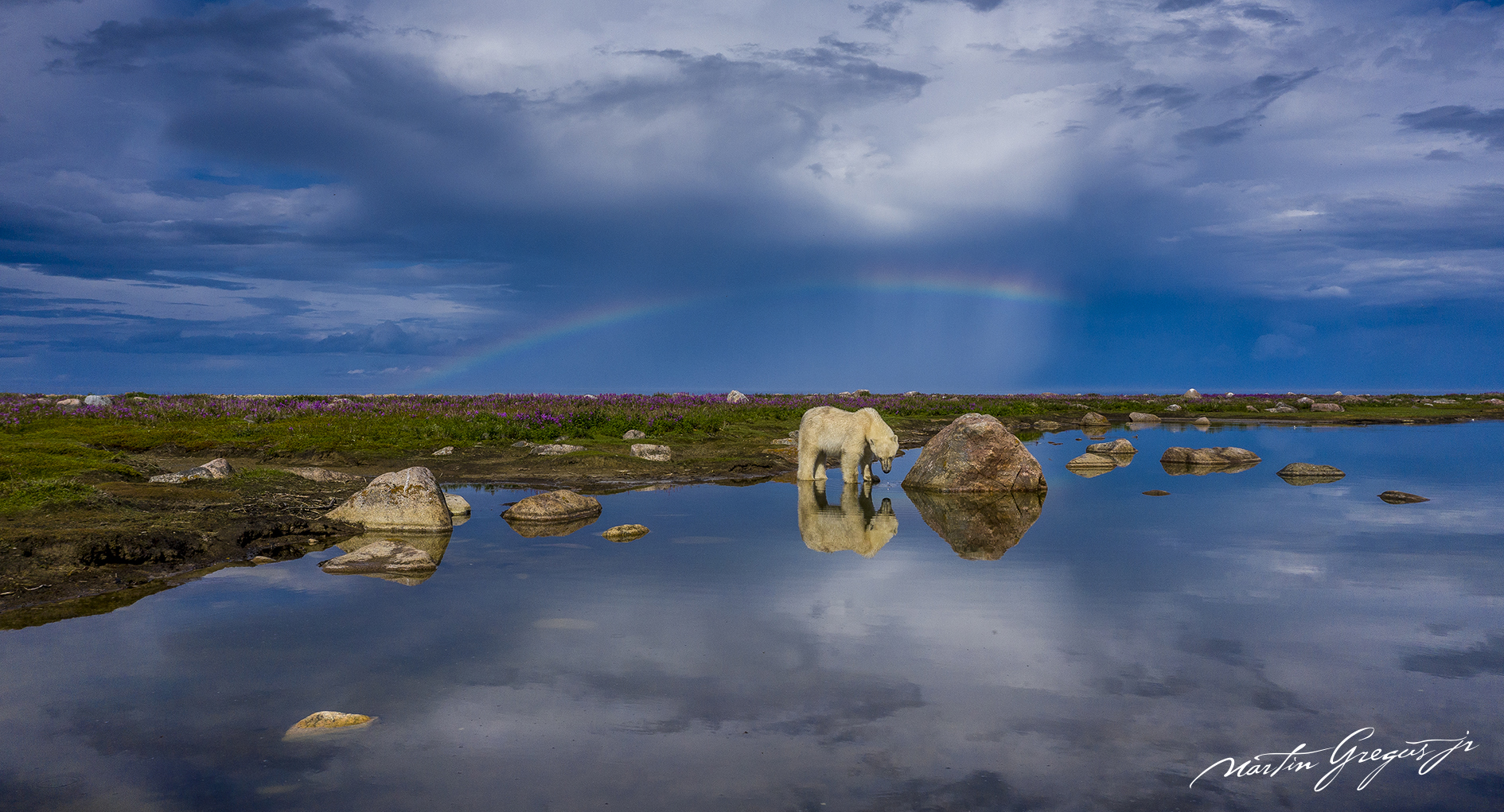 “This is one of those images that I had maybe a few minutes to capture. It was one of the only rainstorms during the 14 days we were there. We saw these giant clouds coming in from the north; everything just calmed and you could see reflections and all the bugs came out. That was awful, but everything else was beautiful. I wanted to shoot, but we had to run to camp and pack everything up so it wouldn’t get soaked.

“The storm passed quickly and afterward, that serenity came again and I could see different bears starting to move around. I knew I didn’t have enough time to go and shoot any of them because they were too far away, so I decided to fly the drone.

“I could see this bear going over to the lake and I could see the rainbow forming behind him. And I was just begging that he would get into the perfect position before the rainbow disappeared. The drone is really a tremendous tool and an opportunity for me to get a different look at these animals. You know, these polar bears might let you get that close, but I would never try!” 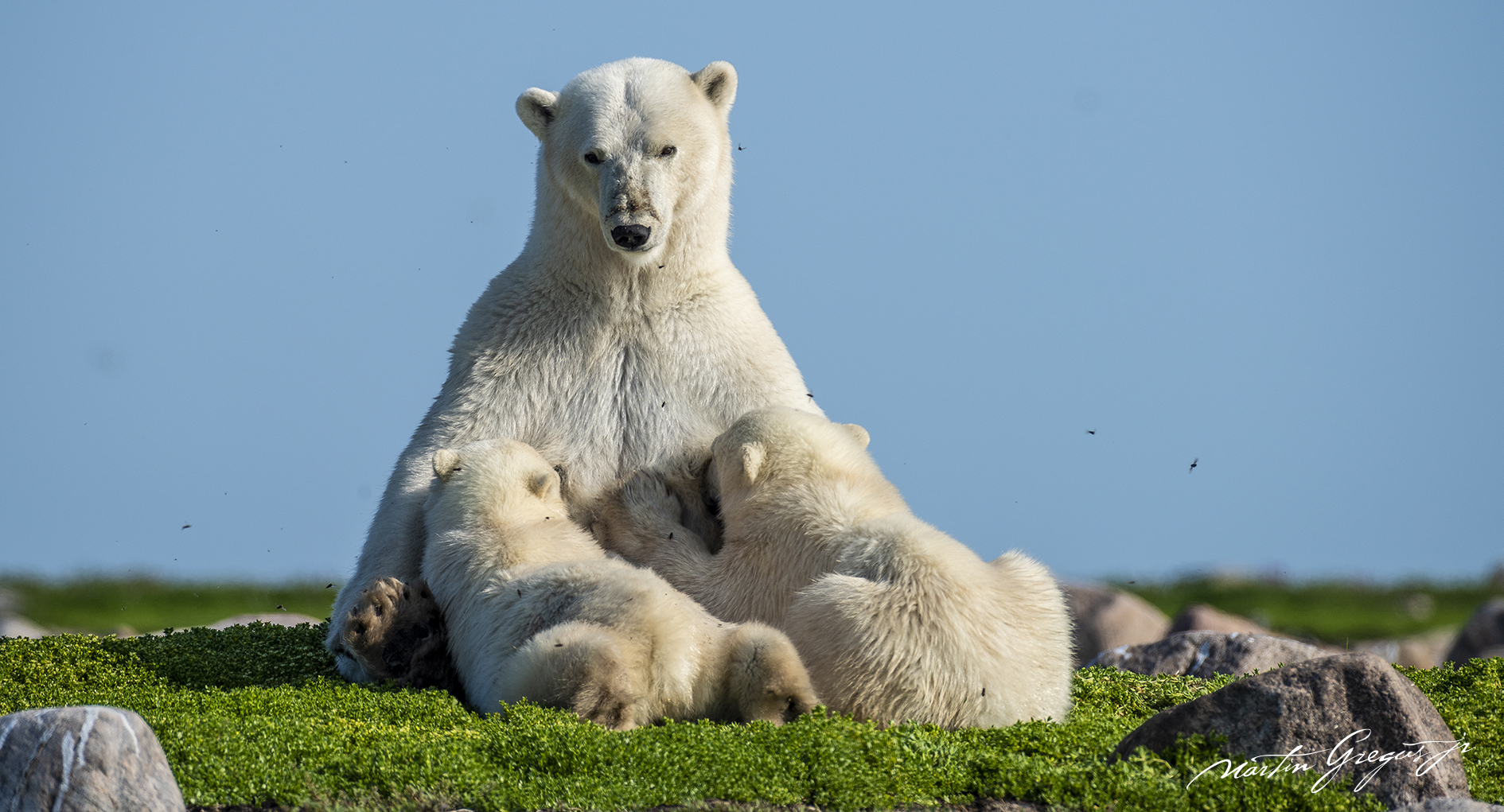 “Watching the mom and cubs nurse is ... I get goosebumps even now thinking about it. It’s one of those moments that you don’t really see too often. To have this happen in front of us was just unbelievable. At this point in the trip, we were super tired. We barely slept at all because bears kept on coming by. So I said, I know we’re super exhausted, but there’s a mom and two cubs there. They’re sleeping. Let's go over.

“It took us about an hour to get into position. They were sleeping, but they knew we were there. The mom occasionally lifted her head up and just checked where we were. We made sure she knew about us. I always talk to the bears, like, ‘Hey, how’s it going? How’s your day going? Nice to see you. We're just going to go over here, take some pictures.’ Eventually the cubs started playing and complaining and whining a little bit. So she let them start nursing and we just looked at each other like, ‘Wow.’ She was showing us this really intimate moment, when she was at her most vulnerable.

“We could hear the cubs; they sound like little rotor blades, almost like they were purring. And occasionally they would look up and they had milk around their mouths. It was just mind-blowing. Once she was done, she walked off and went to forage and she left the two cubs at our campsite, unguarded. At that point I knew we had formed a relationship with these bears. I appreciated that even though we were in their territory, they were able to be their most natural around us.”