The petroglyphs are the first to be found at the archaeologically significant site outside Saskatoon
By Diane Selkirk
December 3, 2021

On a dry, windy day in August 2020, archeologist Ernie Walker and bison manager Craig Thoms were in Wanuskewin Heritage Park’s paddock visiting the site’s newly acquired plains bison herd. The pair was standing near a spot where the bison had denuded the vegetation by rolling on the ground taking dust baths. Looking down, Walker noticed a protruding rock with a groove cut across the top of it. Assuming the cut was from tool damage, he brushed away the dirt, exposing even more cuts — and that’s when he began to get excited. “They were all parallel lines,” he says.

Walker rushed back to the Visitor Centre to tell the other staff what he’d found. “We’d just been lamenting about how we had everything: tipi rings, buffalo jumps, the northernmost medicine wheel,” he says. “But we didn’t have rock art. And lo and behold, what happens? The bison show them to us.”

In the weeks that followed, three more petroglyphs and, remarkably, the tool that carved them were discovered at the site, located on the outskirts of Saskatoon. The rock art was carved in a style known as hoofprint tradition, which was common in southern Alberta, southern Saskatchewan, North Dakota, South Dakota, Montana and Wyoming 300 to 1,800 years ago. Walker explains hoofprint art is metaphorical: “Instead of carving an entire bison, they carved motifs such as hooves.”

The Wanuskewin petroglyphs consist of a 250-kilogram boulder bearing the carved grooves of ribs called a Ribstone, which is associated with the bison hunt; a larger stone with a grid pattern, which Walker says is usually associated with an out-of-body experience, “like a vision quest”; a football-sized rock with pits and grooves; and a 544-kilogram boulder covered in lines.

As soon as the petroglyphs were found, Wanuskewin’s Elders were invited to see the rocks, which they call “grandfathers,” and offer their thoughts on the best way forward. Cy Standing, Park Elder and Dakota Knowledge Keeper, says all rocks are sacred and typically shouldn’t be moved, but in this instance the Elders felt they should be removed from the ground for their protection and displayed in the Visitor Centre for people to learn from. 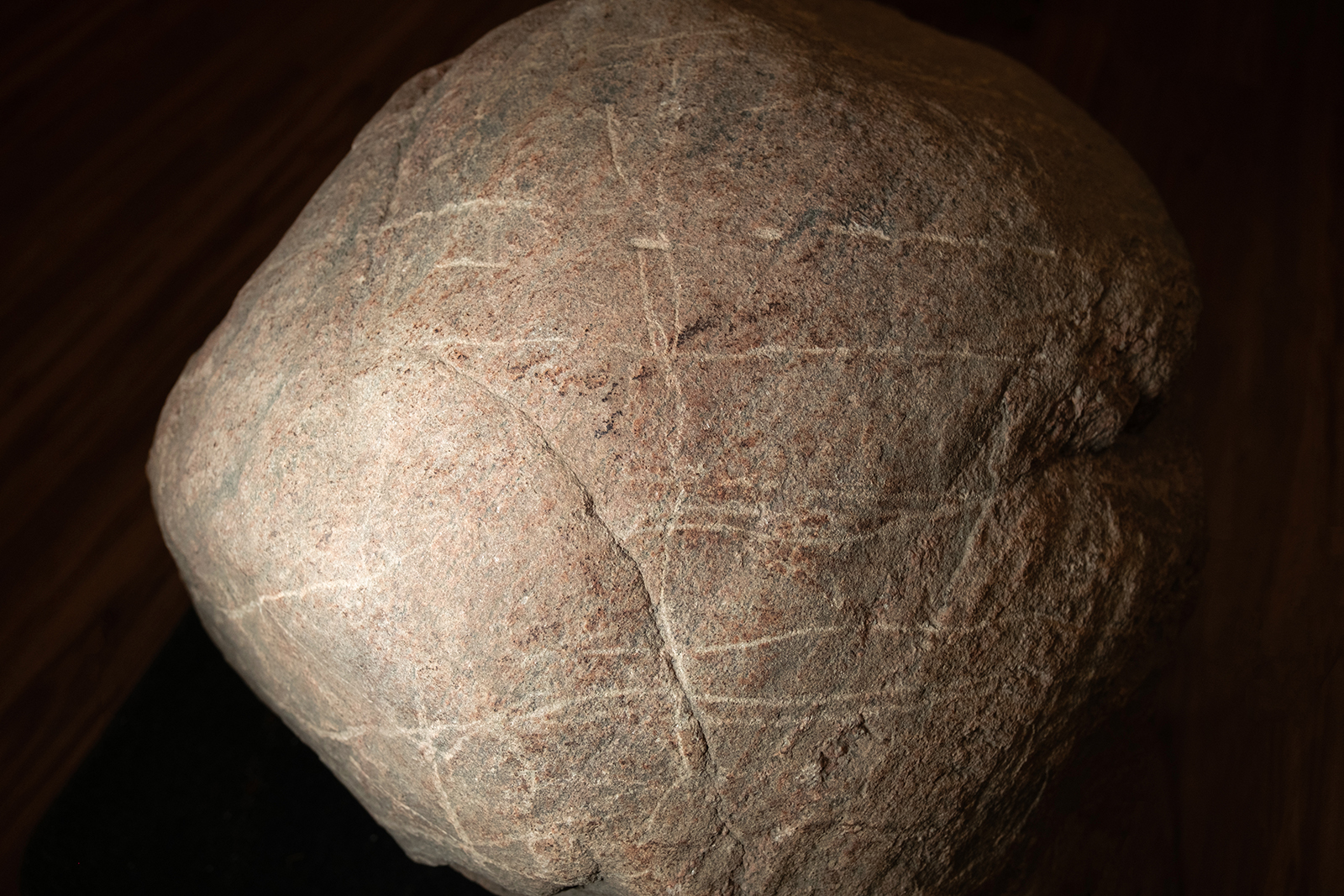 In many ways the find couldn’t have come at a more serendipitous time. After 40 years of operation and archeology — Walker and staff have unearthed more than 200,000 artifacts from 20 dig sites representing all the major time periods in Northern Plains pre-contact history — Wanuskewin was ready to grow.

A $40-million expansion was underway, including a partnership with Parks Canada that resulted in Wanuskewin welcoming a (rapidly-expanding) 11-strong herd of plains bison — a species that’s key to the regeneration of prairie grassland. The park also added seven new exhibits (including one dedicated to the petroglyphs), renovated the restaurant and gift shop, added conference rooms and built a new snowshoeing and hiking trail.

Walker says they’d also put together a bid to become a UNESCO World Heritage site (it’s currently on the tentative list, a major step toward nomination) but felt that their application was missing tangible evidence of culture.

“The migratory nature of the people that lived here in pre-contact times, following bison herds, makes it hard to show spirituality and ceremony,” says Walker. He explains that while they’d found archeological proof of almost 6,000 years of constant human presence in the area, with artifacts ranging from potsherds to bone fragments to projectile points, they hadn’t found anything that revealed the values and beliefs of the region’s inhabitants — until the bison pointed them toward the petroglyphs.