Behind the wires: A look back at Canada’s golden age of telegraphy

On the 175th anniversary of Canada’s first telegraph message, a pioneering telegrapher recalls her exciting career
By Kallan Lyons
December 19, 2021

On a warm August afternoon at Calgary’s Heritage Park, a crowd attending the annual Railway Days exhibition made their way to the pavilion to watch a live demonstration of telegraphy. Lavina and Earl Shaw, veteran telegraphers both in their 80s at the time, sat on stage, ready to show off their skills. On the other side of the stage stood two college students, phones in hand, eager to try their texting prowess against a master of the original instant message: Morse code. The emcee handed Lavina and her first competitor a piece of paper with a sentence to transmit, and they turned to their devices and started swiftly tapping away.

The transmitted message was read aloud within seconds, and the emcee declared Lavina victorious. Then it happened again. And again. Eventually the young texters admitted defeat and left the stage. The watching crowd erupted into enthusiastic cheers as the octogenarians were crowned instant messaging champions. 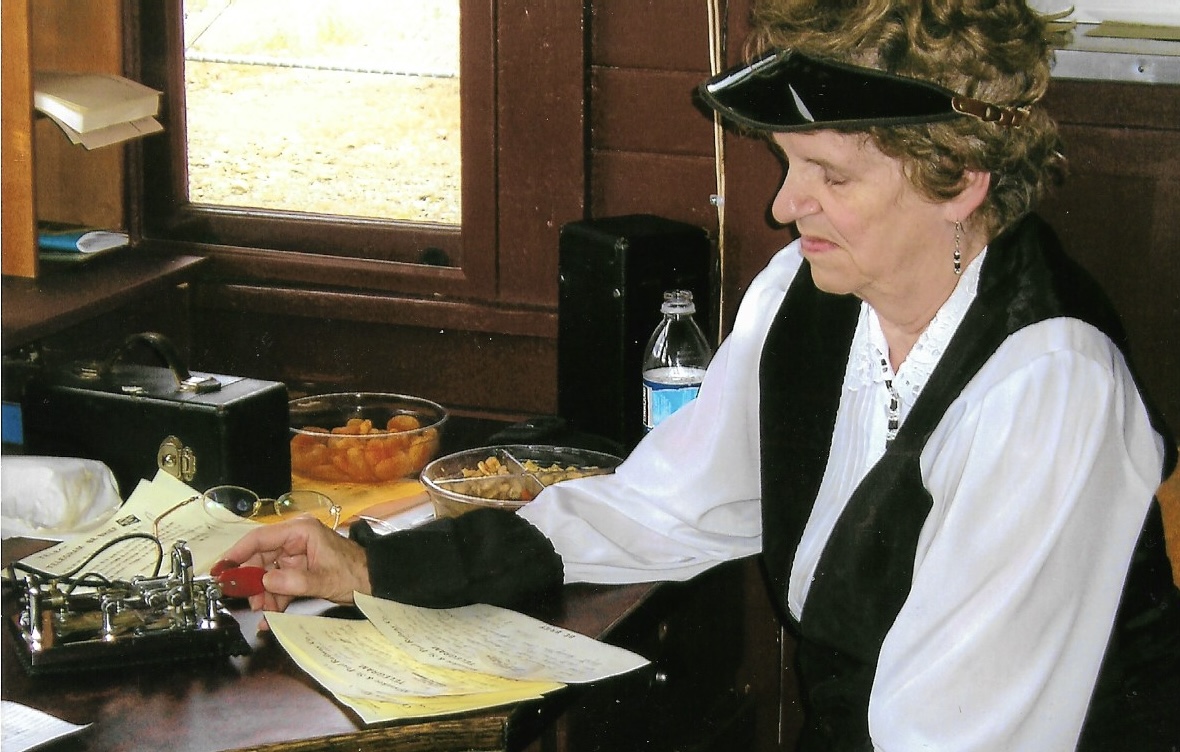 Lavina Shaw in her telegrapher’s uniform, which belonged to her father. (Photo courtesy Lavina Shaw)

Long before mobile phones, there was the electrical telegraph. Although a number of working prototypes were developed in the early 19th century, it was the single-wire telegraph system invented by American Samuel Morse — and its eponymous alphabet of dots and dashes — that quickly became the international standard, including in Canada. In 1917, train dispatcher Vincent Coleman saved 300 lives by sending a heartbreaking warning to an inbound train moments before the Halifax Explosion. Two decades later, Canadians used Morse code to intercept German messages during the Second World War.

This year marks a historic milestone: the 175th anniversary of Canada’s first telegraph message. On Dec. 19, 1846, the Niagara Electro-Magnetic Telegraph Company sent a message from Hamilton to Toronto, which simply read: Who is in the office? The telegraph was the first technology to connect Canadians across the country, but the true pioneers are the people behind the wires. They call themselves “brass pounders,” and Lavina Shaw is proud to be one of them. 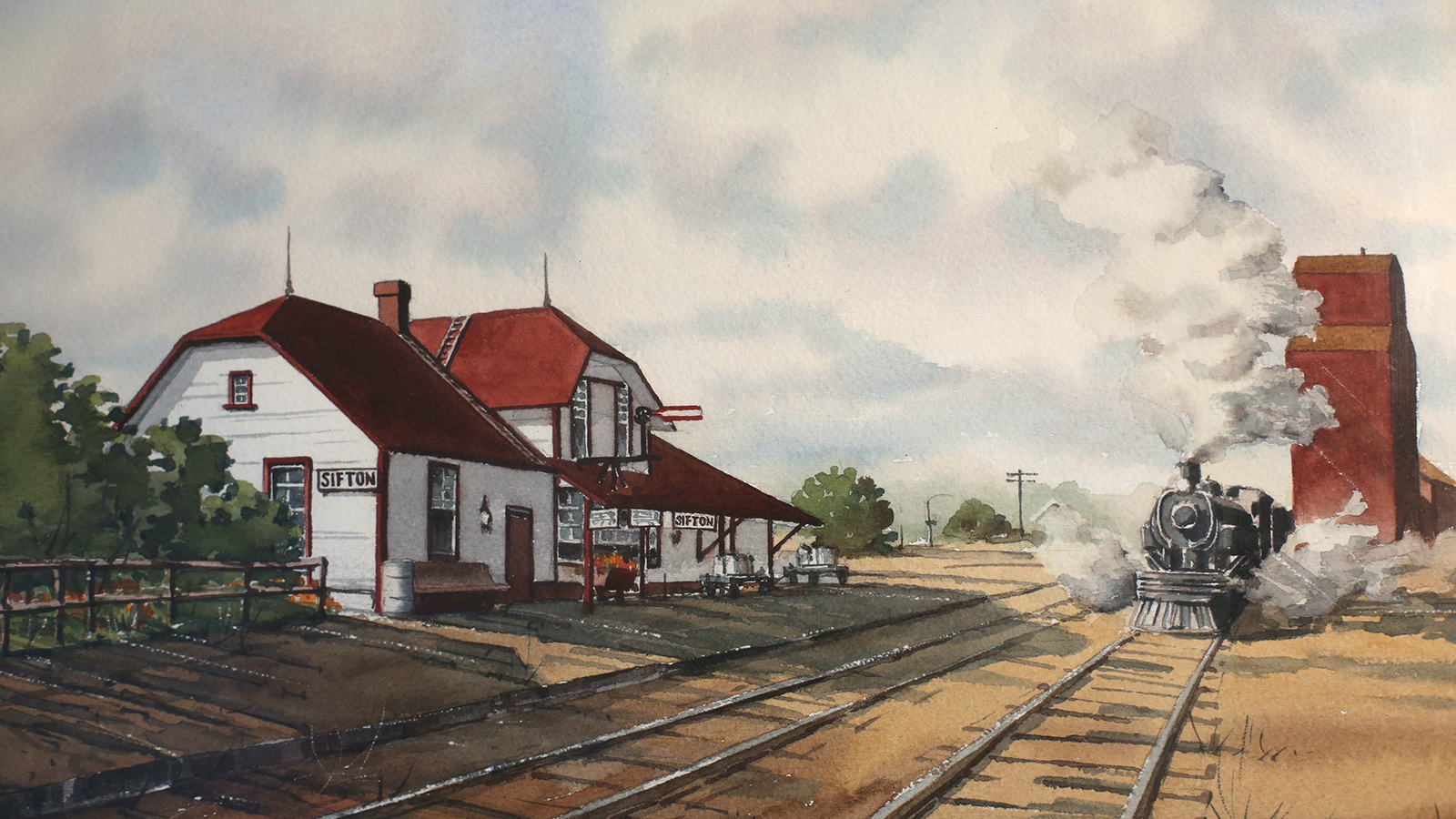 A painting of the railway station in Sifton, Man., where Lavina Shaw grew up. (Image courtesy Lavina Shaw)

Lavina was destined to be a telegrapher. Her father, grandfather and uncles all worked as railway operators and used the telegraph to deliver train orders to conductors and engineers. As a young child, Lavina would lie in bed listening to the repetitive clicking and clacking of the register. It was a language she couldn’t understand, and yet it was as familiar as the scraping of wheels on steel tracks and the stream of disembodied voices drifting from the train platform into her childhood home, the railway station in Sifton, Man. When she turned 10, Lavina asked her father to teach her the code.

“I was always going to be a teacher,” says Lavina. “I just kept on learning telegraphy and when I got to be 17, I decided that I didn't want to live in a small village anymore. So, I went into Winnipeg and tried out as a telegraph operator. I passed right away.”

Lavina decided to become a commercial telegrapher — a career which, surprisingly for the time, earned her the same wage as her male colleagues. Two months after completing her training, she was sent to Saskatoon for her first assignment with Canadian National Telegraph, working six days a week translating messages mainly sent from railway stations across the province. Much like modern-day texting, telegraphers used a series of abbreviations to speed up their communications. The word that for instance, was shortened to tt: two dashes in Morse code. Recently, the now-92-year-old Lavina overheard a few people bemoaning the fact that teenagers are butchering the English language: “I got up and said, ‘50 years ago I used all those abbreviations, and I don’t think the language was ruined!’”

During a typical shift, Lavina copied an average of 20 telegrams an hour, ranging from birthday messages to horse betting results. “That was a scandal, actually,” she says. “They [the telegraph operators] would already have the results before they put [their own] bets in. They actually made quite a bit of money. I was told I don’t dare tell anybody.” Lavina was already sworn to secrecy: handling peoples’ private communications meant everything she copied was confidential.

Life as a telegrapher was fast-paced and never boring. By 1946, sending and receiving telegrams had become a regular part of daily life, but some people were still getting used to this “new” technology. “People thought that they could send flowers over the telegraph, and one person wanted to send a pair of shoes, thinking it would travel along the wire,” Lavina laughs.

From Saskatoon, Lavina moved on to several smaller communities: Moose Jaw, Sask., Fort William, Ont., (now Thunder Bay) and Flin Flon, Man. As a female telegrapher, often working late into the night, she had several uncomfortable encounters. One evening she received a telegram from a man claiming to be a judge’s son, whom she presumes may have been running from the law. He threatened that if word got out he was in the area, her life would be in danger. Her love for the job kept her going. In Flin Flon, she covered local breaking news for the Winnipeg Free Press and even moonlighted as a sports broadcaster, doing play-by-plays at local hockey games.

When work was slow, she would play checkers with other operators over the wires, tapping out her every move. Soon, she could tell each telegrapher apart by their “fist,” or distinct style of transmitting. “I could still do that, hear somebody on there and know that’s so-and-so,” she says. “They say women have a smoother method of sending.”

In an example of online dating that long predates the internet, Lavina’s “fist” caught the attention of Earl Shaw, a telegraph operator in Melville, Sask. By then, Lavina had returned to Saskatoon and copied lots of messages to and from Melville, nearly 300 kilometres away. A good majority were from Earl, who also grew up on a railway station and came from a family of telegraphers. Gradually, they started corresponding by regular mail to avoid any uninvited listeners along the line. The shared language that brought them together resurfaced after they were married in 1949. “When we had our two girls, we’d converse [in Morse code] with a fork and a knife…the kids couldn’t understand what we were saying,” Lavina recalls with a grin. 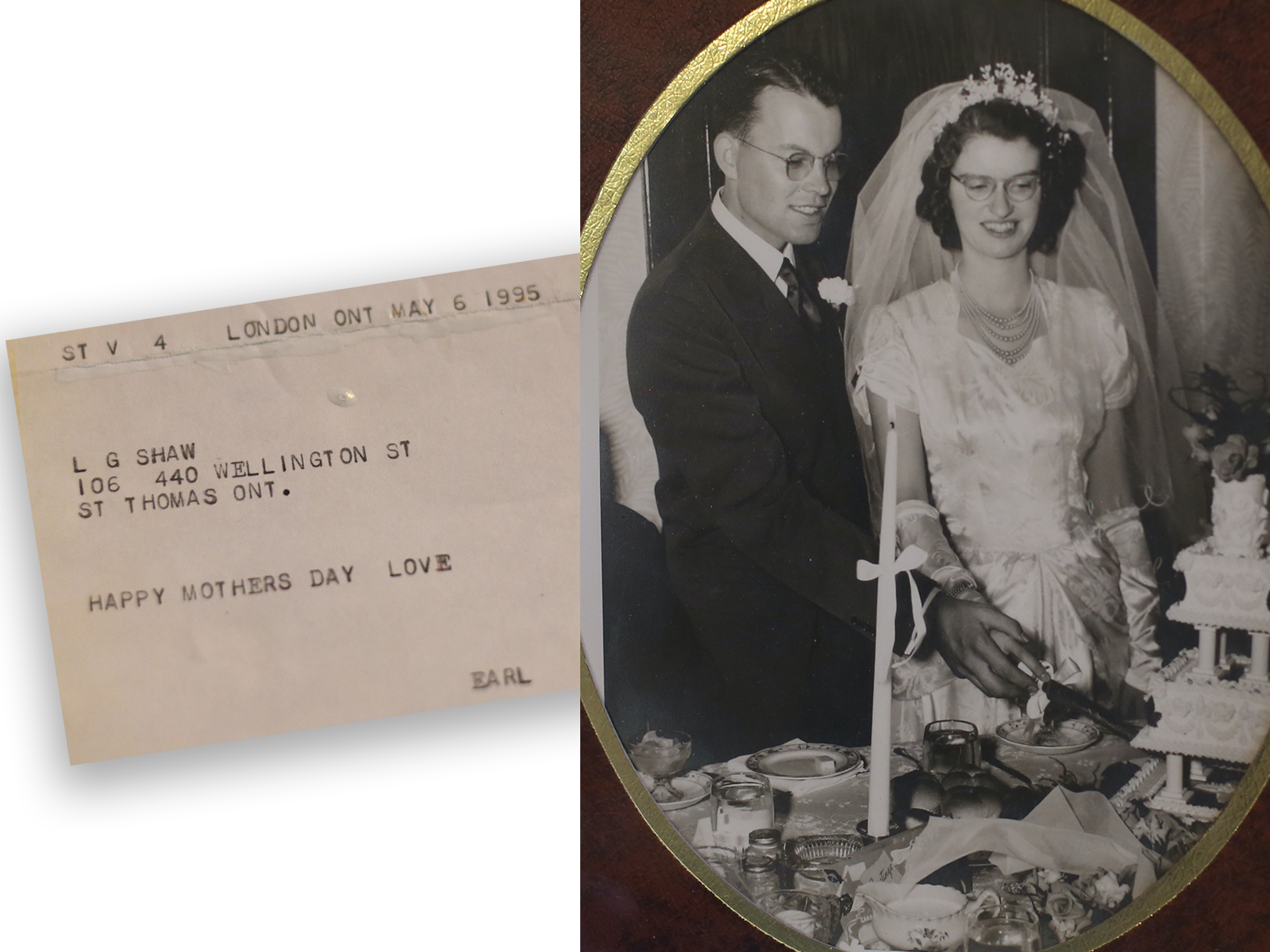 The couple settled in Vancouver, where Lavina landed a job with Canadian Pacific Telegraph, copying news for the Vancouver Sun and the Canadian Press. In 1952, she was put on a direct line to Time Magazine during the election of U.S. President Dwight Eisenhower. The little girl from Sifton, Man. who used to lie awake wondering what was being said over the wires was now translating major world events for millions of people across the country.

By the early 1960s, railway stations across Canada were shutting down and telegraphy was being replaced by telephones and computers. The last Morse code train order was sent in 1977. Lavina’s father, the man who bestowed his love for telegraphy, is long gone, along with Lavina’s childhood home. During the golden age of Canadian rail, “They had to have a telegraph operator every 35 miles [56 kilometres],” says Lavina. “It’s sad to travel through the prairies and not see any of the train stations there anymore.”

Telegraphers, too, are disappearing.

In June 2018, the B.C. chapter of the Morse Telegraph Club paid tribute to Lavina. The club is an international community dedicated to preserving telegraphy’s heritage. Lavina made history as its first and only female president. When she joined the B.C. chapter, it had 75 members. After presenting her with her trophy, the 10 remaining members tapped a final goodbye. “Nobody else would volunteer so we had to close it down,” says Lavina. “There’s not too many of us left.”

As part of her own legacy, Lavina is determined to keep telegraphy alive and well. On yet another warm summer afternoon, before the COVID-19 pandemic, she stood in front of a group of curious campers in Port Coquitlam, B.C., where she now lives, and taught each one how to tap out their name in Morse code. Technology may look very different today, but Lavina doesn’t want anyone to forget how telegraphy shaped modern-day communications.

“It should be taught in history books,” she says. “It really changed the world.”

Watch a video about Lavina Shaw’s life and work: