Announcing the winners of our 34th Annual Photo Competition

The best of the best images from the 2019 competition
By Alexandra Pope
February 3, 2020

The Milky Way rises over the Alberta badlands. A northern pygmy-owl fixes its challenging yellow gaze on the photographer who has dared to enter its forest on northern Vancouver Island. A kayaker dips her paddles in the calm waters of an Ontario lake as dawn paints the sky in shades of vivid turquoise and pink. The winning images in Canadian Geographic’s 34th Annual Photo Competition are a testament to the incredible geographic and biological diversity of this country, and the talents of our photographic community. The following 10 images represent the best of the best of this year’s competition, chosen from among more than 5,100 entries by our panel of judges: Photographers-in-Residence Michelle Valberg and Scott Forsyth, RCGS Explorer-in-Residence George Kourounis, and freelance photographers Zach Baranowski and Gary Cummins.

We gratefully acknowledge the support of our prize sponsors, Vistek and Nikon. 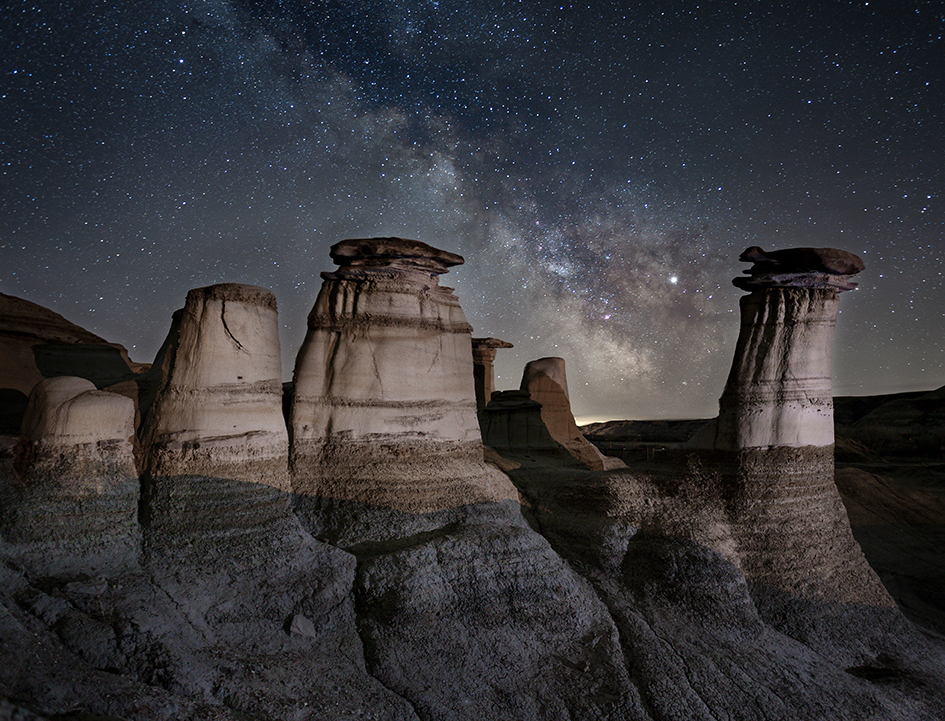 The Milky Way rises over the hoodoos in the badlands around Drumheller, Alta. in the wee hours of a spring morning. The hoodoos are rock formations, some up to six metres high, that have been shaped by wind and water over millions of years. Cree and Blackfoot traditions hold that they are petrified giants who come alive at night to defend the land from intruders.

“The compositional orchestration of placing the Milky Way galaxy between the towering hoodoos while preserving the exposure of both the night sky and the landscape make this image very impactful and pleasing to observe.” 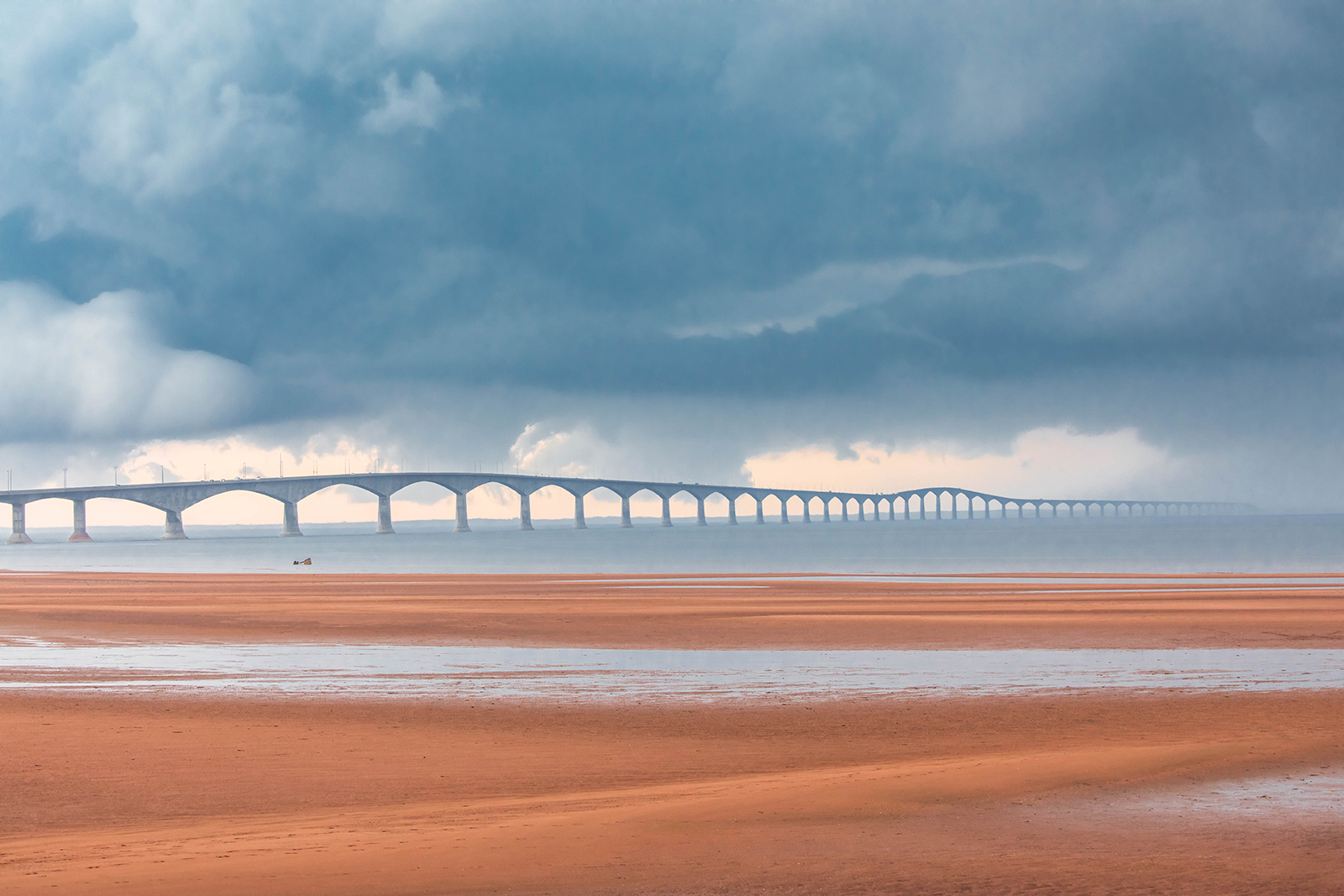 Summer storm clouds gather above the Northumberland Strait between Prince Edward Island and New Brunswick, as seen from Borden-Carleton, P.E.I. Since 1997, the two provinces have been linked by the 12.9-kilometre-long Confederation Bridge, which remains the longest bridge in the world crossing ice-covered water.

“The lines of water and light within the foreground break up the lower third and act as secondary themes to the linear bridge. The powerfully angry sky pulls the eye upwards before it is drawn back to the subject, making the viewing experience dynamic.” 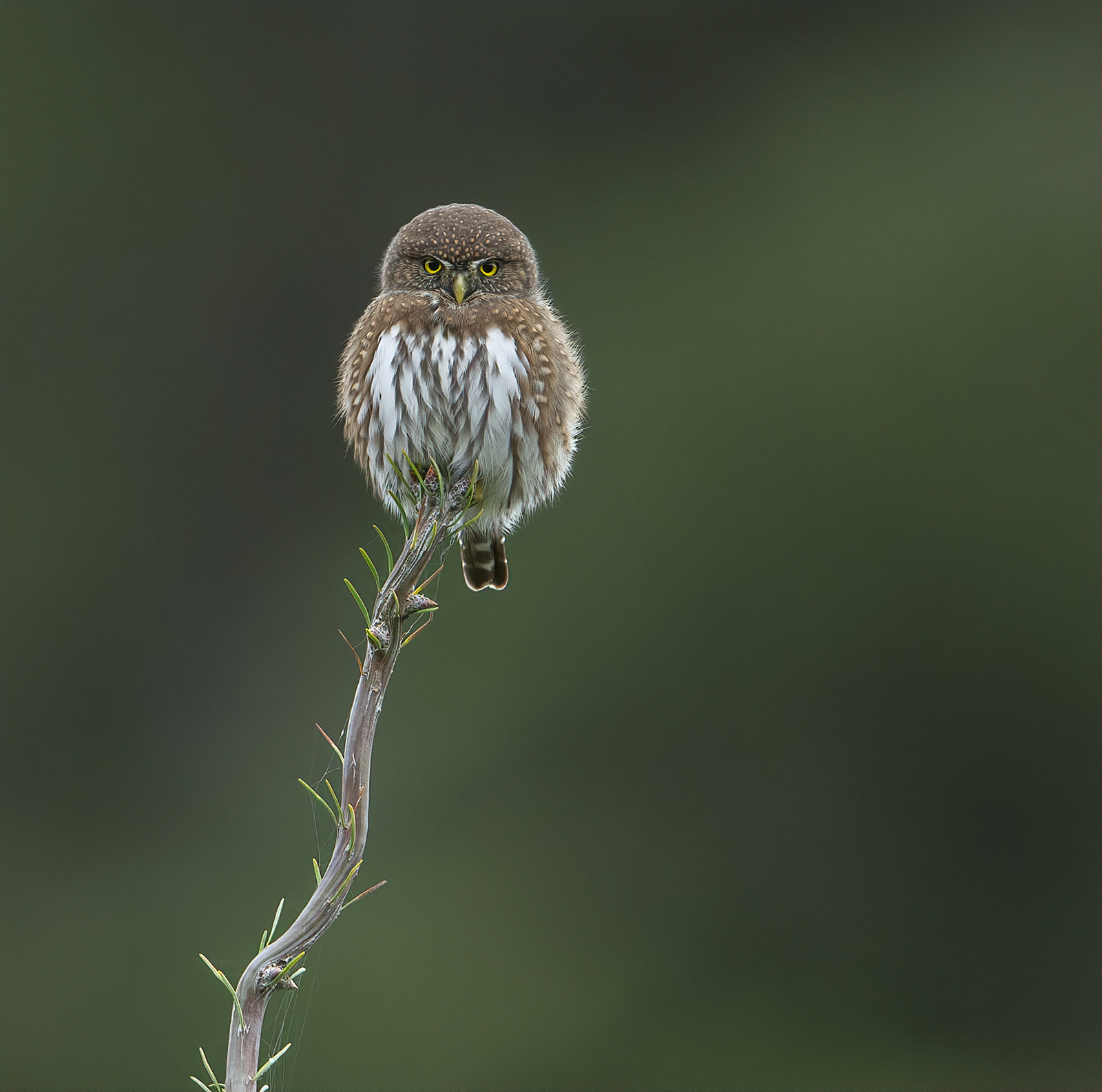 A northern pygmy-owl seems to glare at the camera from its perch on top of a small tree in Port McNeill, B.C. Don’t let its tiny size fool you; northern pygmy-owls are ferocious hunters with a particular taste for songbirds.

“I love everything about this image. The square crop, the composition, the bokeh — all great.” 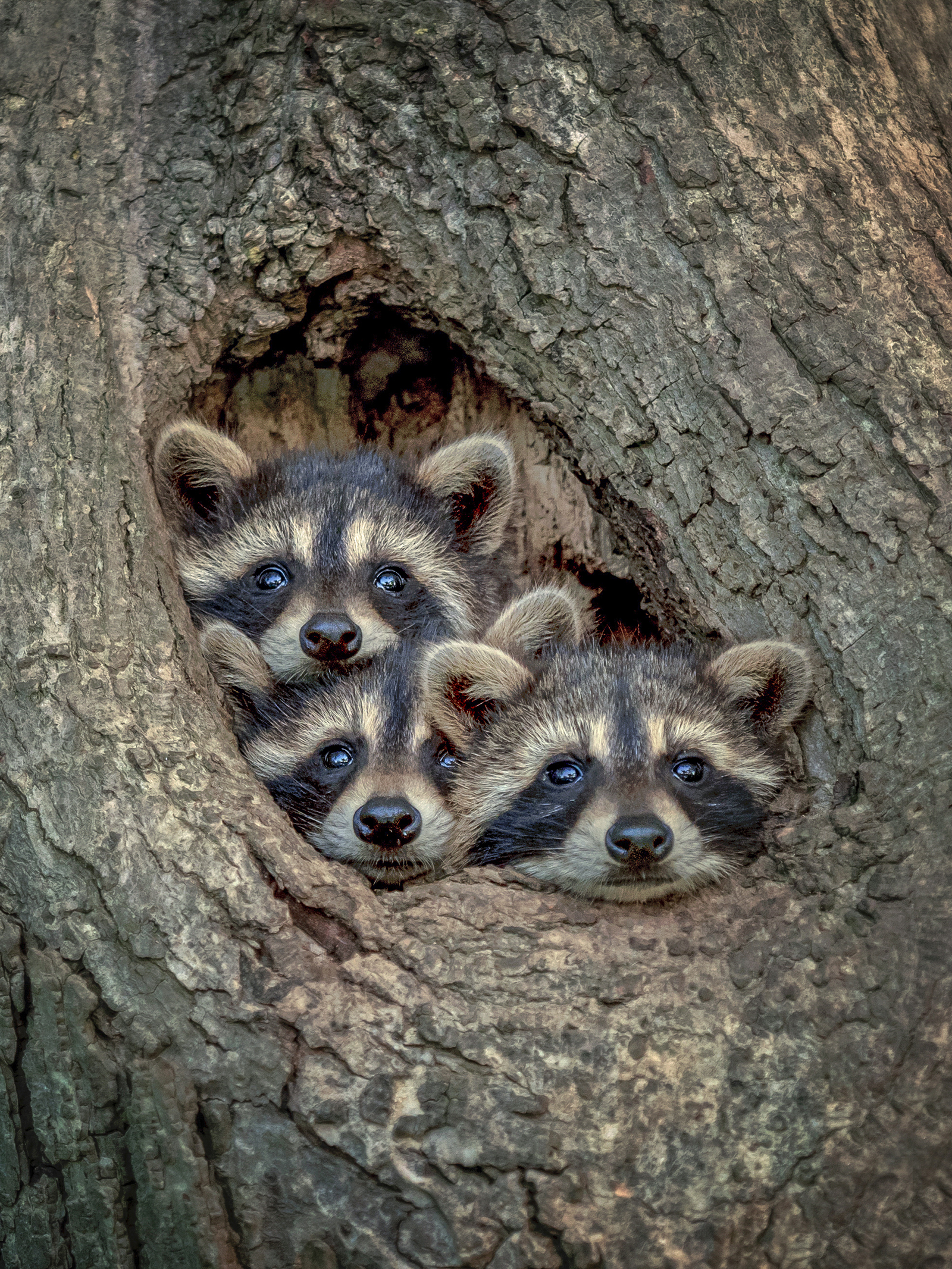 Three eastern raccoon kits peer out of a tree hollow in which their mother has made a den. Raccoons will typically have multiple dens and spend the daylight hours hiding out, but for a young raccoon, every sound is a temptation to sneak a peek.

“The cuteness factor here is awesome. I love that you can see all three sets of eyes!” 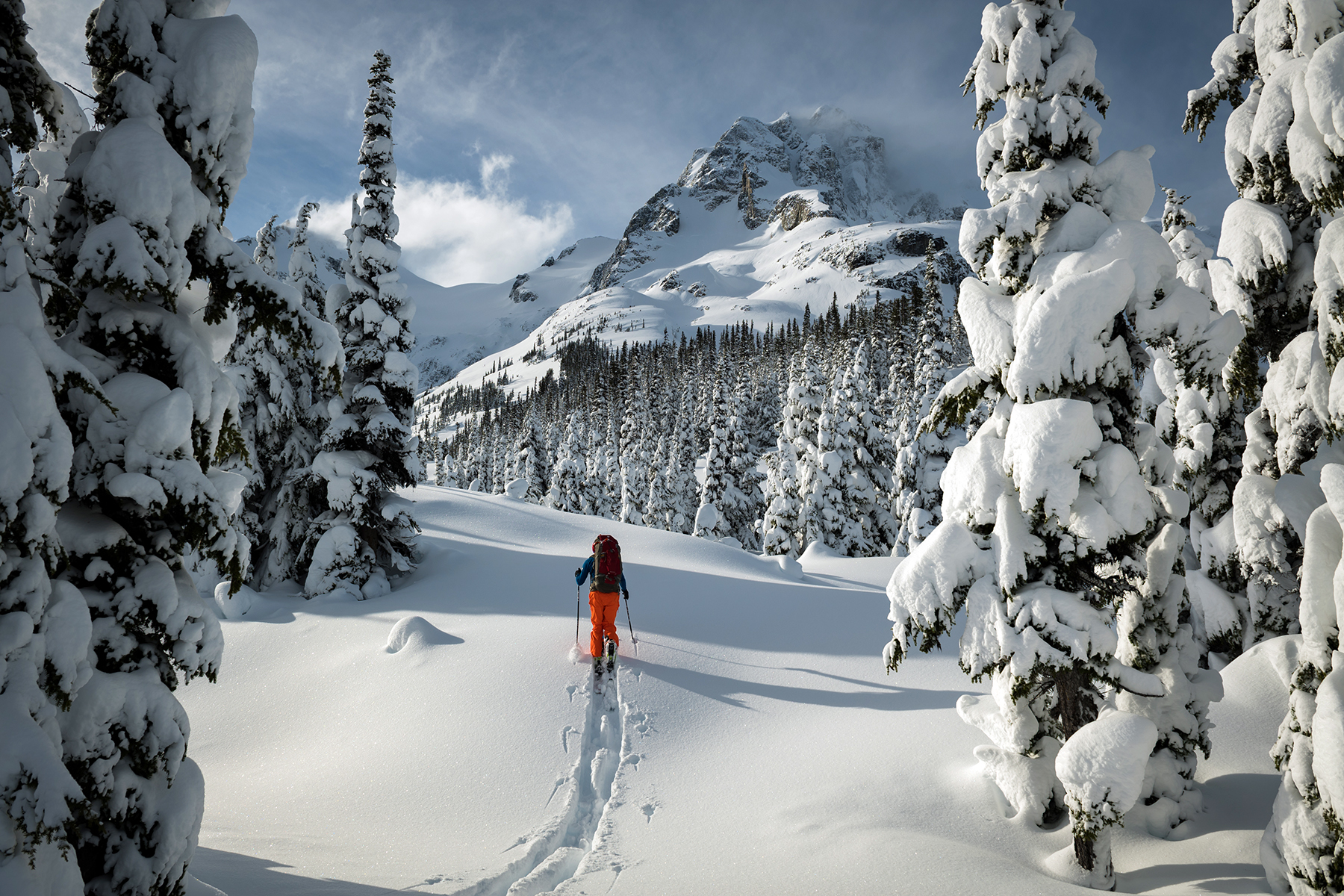 A backcountry skier ascends into a mountain paradise for an overnight ski adventure in the Cerise Creek area of the Duffey Lake Road near Pemberton, B.C. The roughly 100-kilometre Duffey Lake Road between Pemberton and Lillooet is renowned for spectacular scenery and year-round access to parks and trails.

“The visual flow in this image gives a good sense of the journey, from where the skier is now to what lays ahead. It is beautifully shot, with nice tones and detail in the snow.” 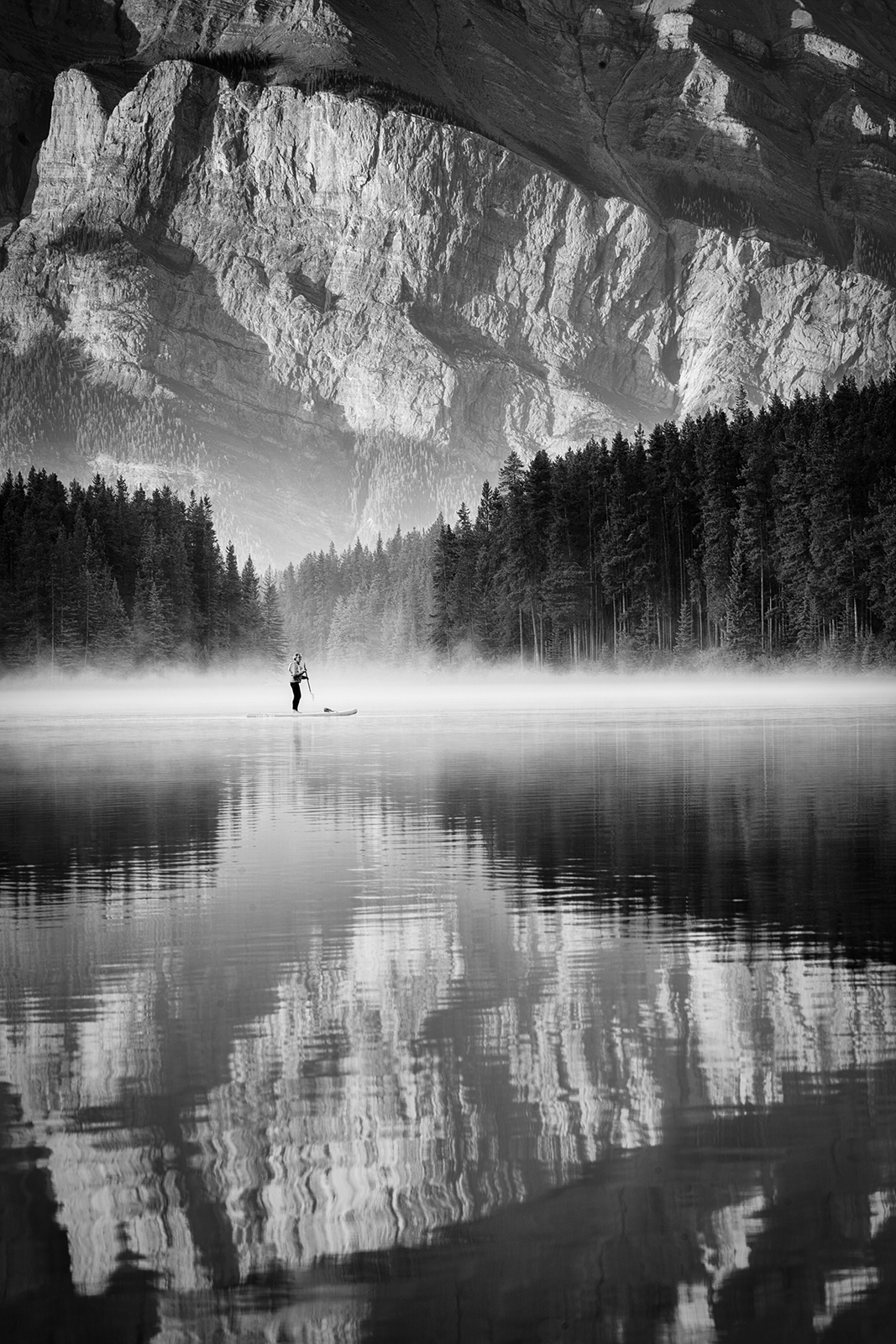 A paddle-boarder enjoys the serenity of a late summer morning on Two Jack Lake in Banff National Park, Alta. Located just 12 kilometres from the Banff townsite, Two Jack Lake, with its panoramic view of Mount Rundle, is one of the park’s most iconic spots for picnicking and paddling.

“I really like the black and white choice for this image as it suits the scene very nicely. The soft transition on the horizon thanks to the mist lends itself nicely to the overall composition and separates the subject nicely from the background.” 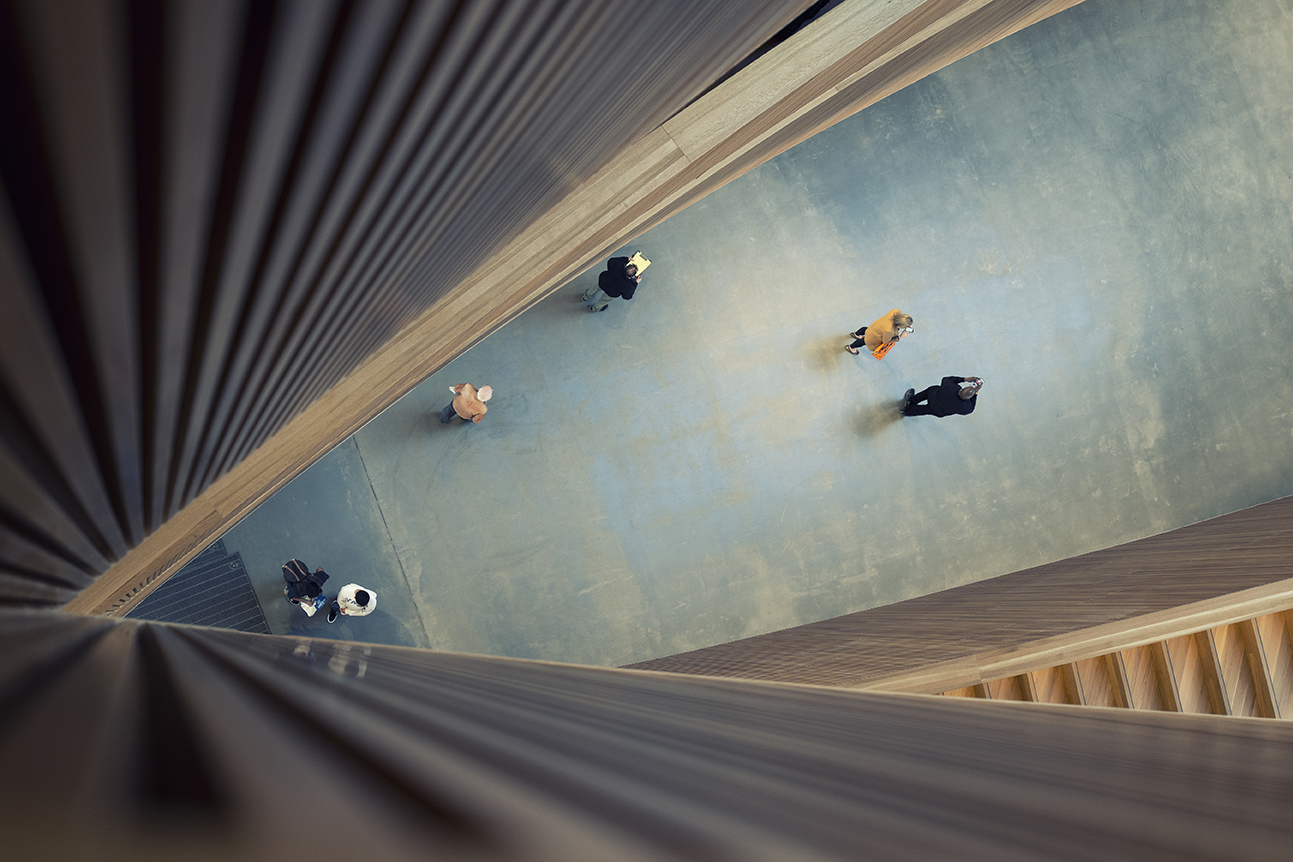 A birds’-eye view of people sauntering through the foyer of Calgary’s new Central Library. Designed by architects from Norway and Toronto, the library has welcomed over two million visitors since it opened to acclaim in November 2018.

“I love everything about this image. The composition, leading lines and colours all work well together. A strong photo, simple yet very effective.” 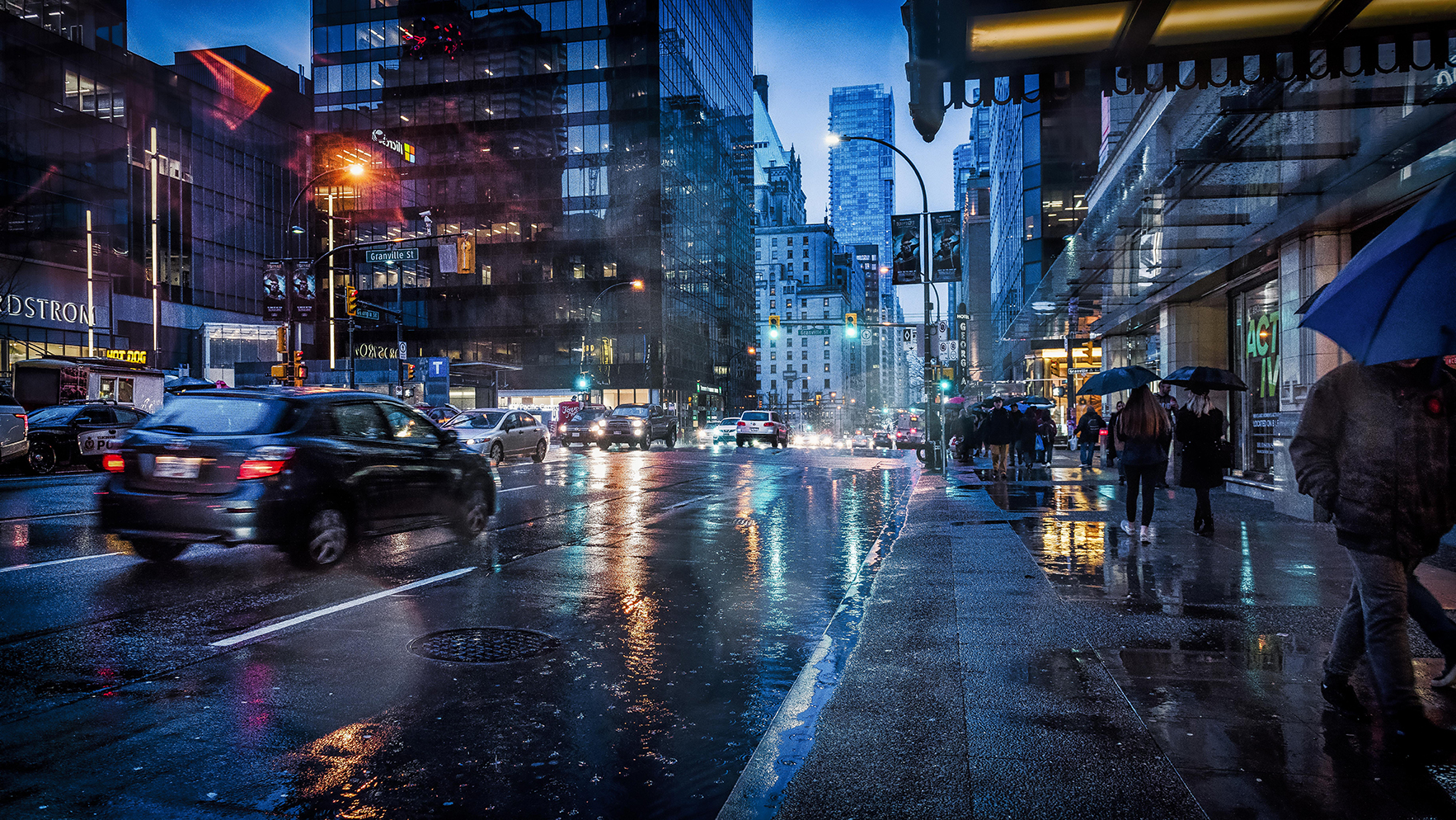 Traffic moves through the intersection of Granville and Georgia Sts. on a rainy evening in downtown Vancouver. On average, Vancouver sees more than a metre of rain each year, making it one of Canada’s wettest cities.

“An urban shot I would be proud of myself. I love the colour and moodiness of the shot. You can feel the coldness of it all. It makes me feel like I'm there.” 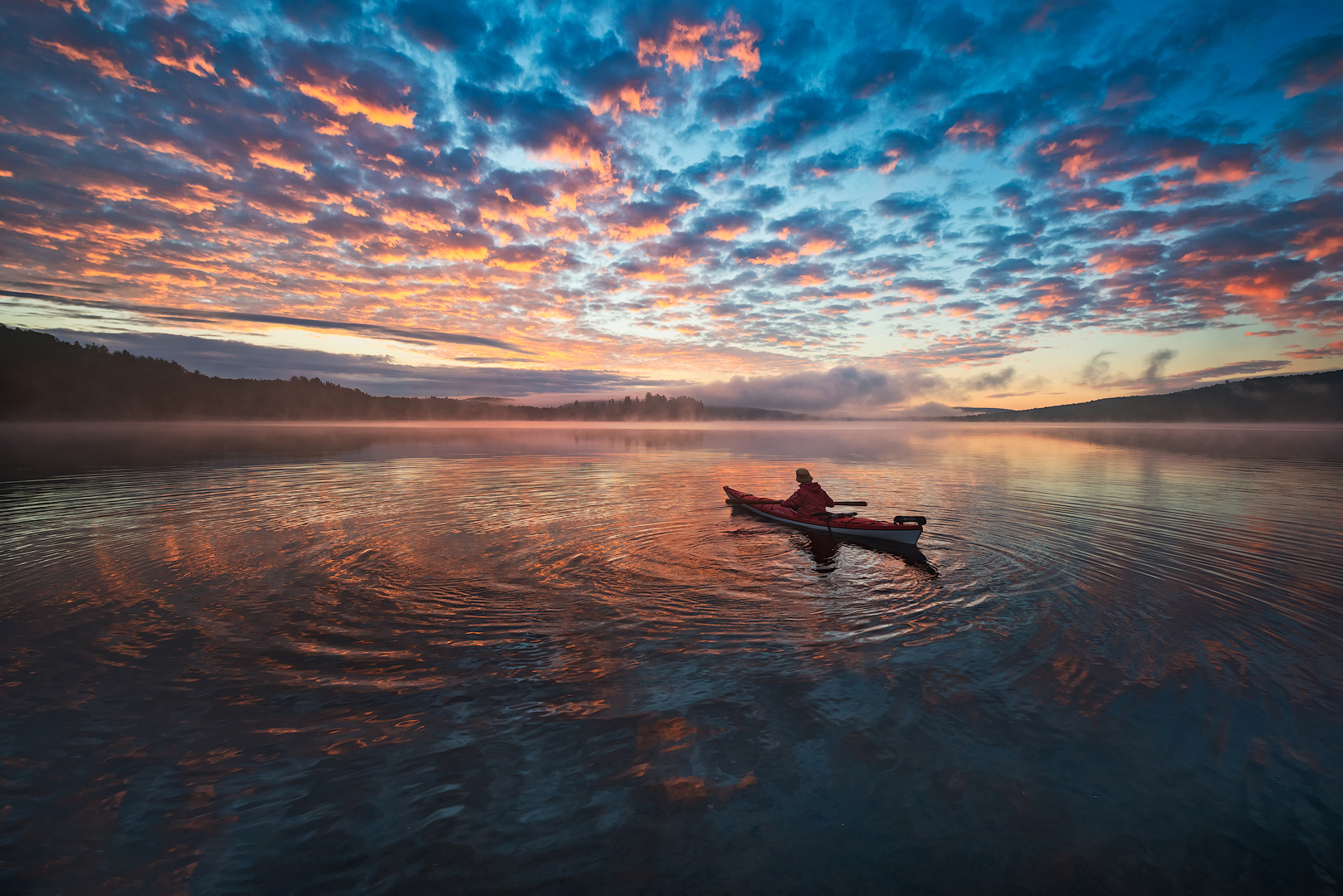 The photographer paddles on Lake of Two Rivers on a colourful morning in Algonquin Park, Ont. A sky with rows of cirrocumulus clouds, also called a “mackerel sky” for its resemblance to fish scales, can signify approaching precipitation.

“Weather doesn't have to be violent to have an emotional impact. This serene scene is so peaceful, but at the same time hints at the old saying, ‘Red sky in morning, sailor take warning,’ implying that this might be the calm before the storm later in the day.” 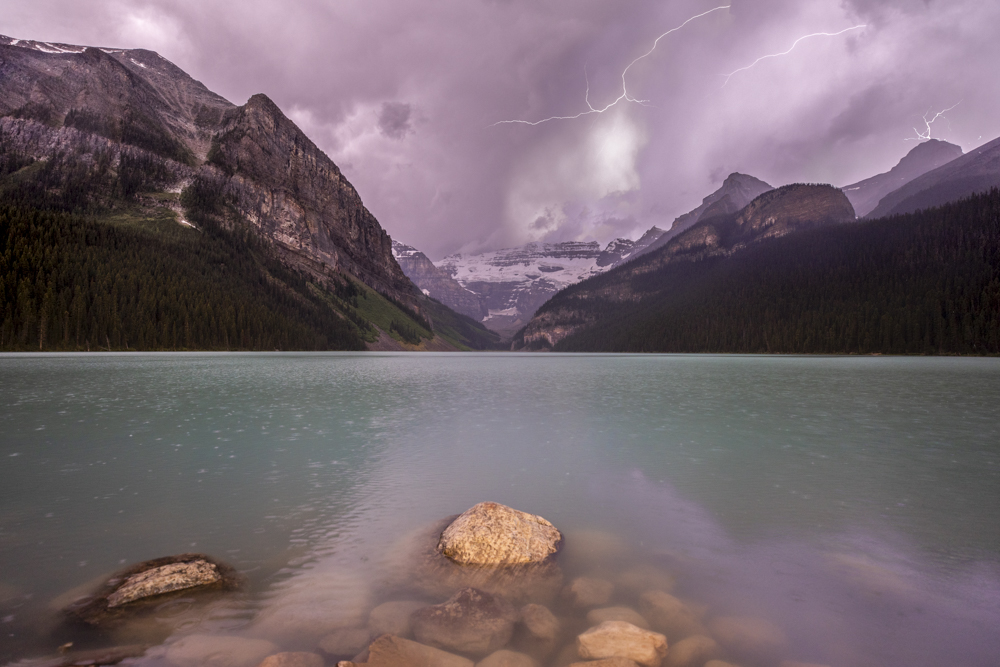 Lightning streaks across the sky during a summer thunderstorm at Lake Louise in Banff National Park, Alta. Mountains in summer are thunderstorm factories as warm air rises from the valleys and condenses around the peaks.

“I love how unusual this image is. Iconic Lake Louise, a lightning storm and snow-capped mountains in the background — it really sums up the diversity of Canadian weather in one frame. I know that shooting this image at the right time, in the rain, was likely very challenging, so kudos to the photographer for their persistence.”

Scott Forsyth (Iconic Landscapes) is a Canadian Geographic Photographer-in-Residence based in Calgary. He specializes in shooting Canadian landscapes, particularly along its three ocean coastlines.

Michelle Valberg (Flora & Fauna) is a Canadian Geographic Photographer-in-Residence based in Ottawa. She specializes in wildlife photography, with a particular interest in the flora and fauna of the Canadian Arctic.

Zach Baranowski (Active Outdoors) is a freelance photographer from the Greater Toronto Area, currently living in Squamish, B.C. He specializes in using photography and storytelling to communicate ideas about conservation and celebrate diversity in the natural world.

Gary Cummins (Urban Canada) is photographer based in Toronto who specializes in urban and street photography. He likes to capture scenes in less favorable weather, as it adds a different atmosphere to his photos.

George Kourounis (Wild Weather) is an Explorer-in-Residence of The Royal Canadian Geographical Society. A well-known television personality, he travels the world documenting nature’s most extreme phenomena.