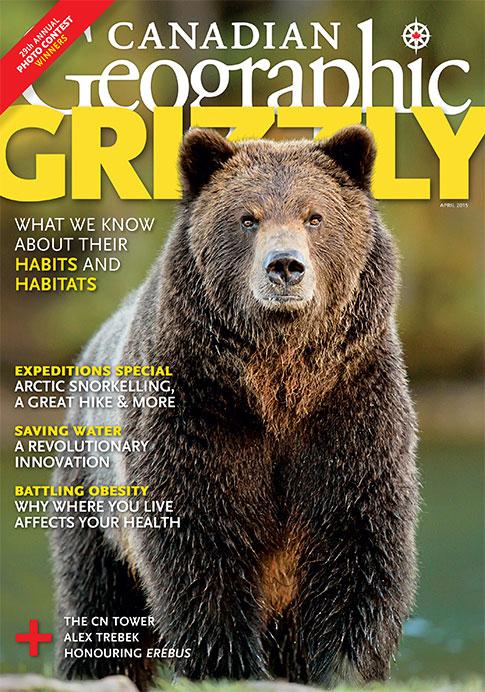 This water came from manure
Ross Thurston, the 2014 3M Environmental Innovation Award winner, is honoured for his system of turning farm waste into its reusable parts, including clean water
Online Exclusive: Peter Power writes about what he learned about water use from photographing at Hudson Dairy

The way of bear F148
Satellite tracking of grizzlies in Banff National Park is teaching us great lessons about the bears’ habits and habitats — and how to live with them
Online Exclusive: Read more about how rail traffic affects the grizzly bears of Banff National Park

The geography of obesity
For Canadian researchers investigating how the design of cities and suburbs affects our health, God is in the details
Online Exclusive: Get insight into obesogenic landscapes using these maps

Interview
Alex Trebek talks about why he loves geography

Infographic
How Urban Barns is revolutionizing farming
Online Exclusive: Take a video tour of the Urban Barns facility and meet some of the people who work there

Our Country: Tanya Tagaq
Tanya Tagaq on the freedom and release she finds around Pond Inlet, Nunavut
Online Exclusive: An interactive map of favourite places in Canada