An essential process has shaped and moulded the lives of migratory birds
By Matthew Reudink
April 8, 2021

As we pass the spring equinox, lengthening days promise the return of warmth and with it, the return of migratory songbirds. In Canada, we welcome back our songbirds, relishing the profusion of song and colour that once again fill wild (and not so wild) places. We revel in their company until summer ends and once again they leave for warmer lands.

But this image of migratory birds as Canadians just skipping off on holiday for the winter can be misleading. Some of these birds, including the Bullock’s oriole, can trace their rich evolutionary history back to an origin in the tropics — we’re just lucky to enjoy their company for a few short months as they indulge on the bounty provided by our temperate spring. But even that is too simplistic.

These creatures are shaped by events occurring throughout the annual cycle: their homes cross oceans and span continents. And while we delight in their song and dance and marvel at their migratory journeys, other more prosaic processes have sculpted myriad solutions for how and where they live.

For migratory birds, there are three energetically demanding events they must undertake each year: breeding, migration and moult. While not as sexy (and thus, not as well studied) as breeding or migration, moult is a critical process.

For most birds, it requires replacing each feather at least once every year. Let’s face it, feathers are pretty important if you’re a bird — it’s hard to migrate with crummy feathers and if you are a male, it’s hard to attract mates if your feathers are dingy and drab.

No surprise then that most birds separate these three costly events; typically, it’s a bad idea to try to weight lift while running a marathon. For most songbirds, this means breeding, then sticking around the breeding grounds for a few weeks to moult before heading south, then maybe freshening up with a few new feathers before heading back north to breed.

But, there’s more than one way to skin a cat … or feather a bird.

In the semi-arid grasslands of Kamloops, B.C., where I live and work, the late summer heat is oppressive and relentless. Even after the shadows lengthen, the heat remains, baking the sage and sending its cloying sweetness on weak and sporadic breezes. Solace doesn’t arrive until long after sunset, when darkness ushers in cool evening air and a welcome respite.

Mapping out the pit stops

For birds like the Bullock’s oriole, a brilliant orange and black songbird (females are more of a drab yellow) that breeds locally in stands of cottonwoods and poplars, the unremitting heat of this parched land, poor in nourishing insects and fruit, is simply too much to bear. When breeding ends in July, the birds head south on feathers dusty and worn from a year of use. These feathers are in desperate need of replacement and travelling on ragged feathers is a dangerous gamble — luckily, the orioles know just where to go for a tune-up. And we can track them on their journey.

Over the past decade, advances in tracking technology and the miniaturization of tracking devices have revolutionized our ability to follow small birds throughout migration. We used to rely on sporadic chance encounters to connect the dots, capturing birds at a banding station and hoping someone else captures them again along their journey.

Now, we attach a geolocator — a tiny backpack with a light sensor that weighs less than a gram — to a migratory bird and, when the bird returns the next season, the data stored in the device will reveal just where these birds have been. In the case of the Bullock’s oriole, it turns out that instead of heading straight to their wintering grounds, they take a two-month pit stop along the way. 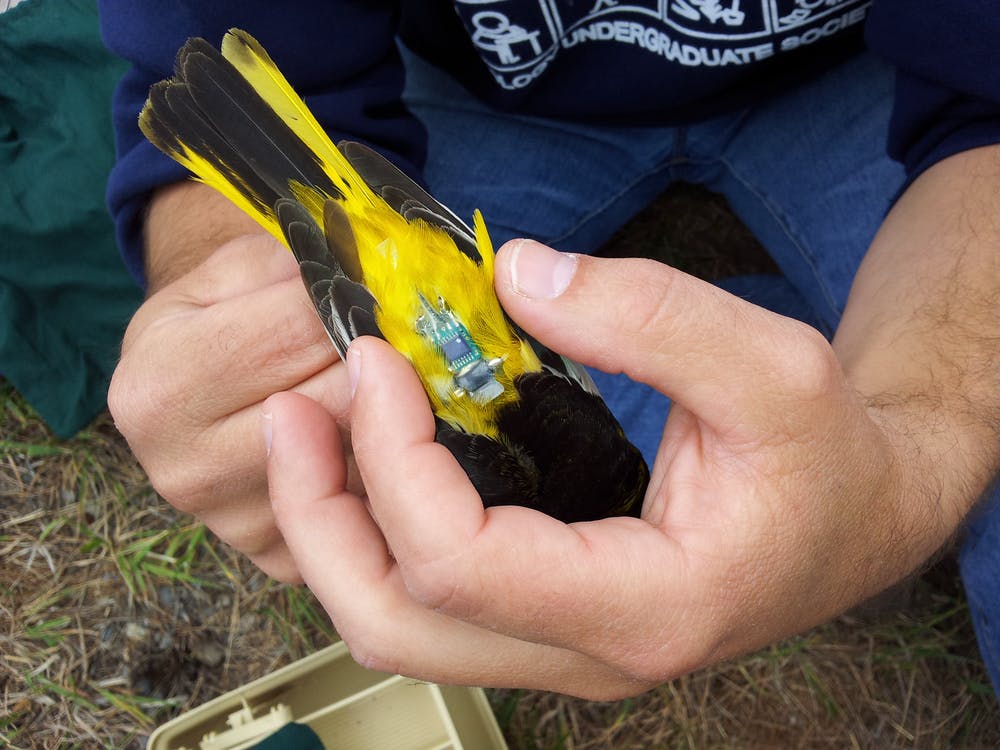 A male Bullock’s oriole is outfitted with a geolocator — a small, light-sensing data-logger that will capture a record of its entire migratory journey. (Photo: Matt Reudink)

As Western Canada withers, an extraordinary transformation is taking place several thousand kilometres to the south near the United States-Mexico border. Monsoon rains, which typically begin in July, transform the parched lands of northwest Mexico and the southwestern U.S. into a veritable oasis where fruits and insects abound. This is a banquet for a hungry oriole desperate to replace worn and ragged feathers, and needing lots of energy to do so. Bullock’s orioles, along with a small cadre of other species, flock to this region each year, spending two months feasting and replacing feathers at leisure before continuing on to the south.

Scientists have been documenting this for decades, capturing moulting birds in the region and describing the occurrence of this phenomenon, which we call moult-migration.

But here’s the rub: only 13 or so of the roughly 200 migratory North American songbird species are moult-migrants that stopover in the Mexican monsoon region. And, incredibly, this migratory pattern evolved not once, but multiple times.

By reconstructing the relationships among all North American migratory songbirds and visualizing them on a phylogenetic tree diagram showing the evolutionary connections between them, it becomes immediately clear that these moult-migrants are perched on branches all around the tree, indicating that this pattern has evolved over and over again.

So, what drove the evolution of this unique behaviour? The answer appears straightforward: poor conditions on the breeding grounds push them away, fantastic conditions in the Mexican monsoon region pull them in. This is referred to as the push-pull hypothesis. Using data collected from NASA satellites — which shows how green and lush an area is or isn’t — the picture is abundantly clear: moult-migrants breed in areas that are much, much drier than their counterparts that stick around the breeding grounds to moult.

Distribution maps illustrating the aridity of the breeding grounds for moult-migrant Bullock’s oriole and their close relative, the Baltimore oriole, which moults on its breeding grounds. (Pageau et al. (2020).

What we’re left with is a multi-stage migration that has evolved over and over again in songbirds — all because of the innocuous and oft-ignored need to replace worn feathers each year. But this is just the start. When we dig into the evolution of moult, we discover that it has led to a variety of strategies from moving up and down mountainsides to find resources for moult (that’s called altitudinal migration) to undergoing two complete moults a year.

The deeper we dig, the more we realize how much this easily overlooked but essential process has shaped and moulded the lives of migratory birds.