Along the North Klondike River outside Dawson City, Yukon sits 80 acres of farmland. The land was a dairy farm and a rodeo grounds before sitting empty for years.

Over the years, the once empty site filled with wall tents and a cookhouse for workers, two greenhouses, a chicken coop and egg grading station, and a basic chicken processing facility.

In 2012 when Dawson’s food supply was disrupted by a washout on the Alaska Highway, the local First Nation, Tr'ondëk Hwëch'in (TH), turned the land back into a farm to protect food security.

Operational in 2014, the farm now grows veggies, berries and mushrooms, and raises livestock including heritage pigs, chickens and rabbits. Last year it produced 12,000 pounds of vegetables, 20 pigs, 400 chickens, and more than 1,500 dozen eggs. It sells to local restaurants and stores in Dawson and Whitehorse, and also sends food to Old Crow, a fly-in community to the north, and other small Yukon communities. A weekly produce box feeds 65 customers. The farm uses organic growing methods and is starting to breed its own lines of rabbits, chickens and pigs. They also sell produce and eggs for other small producers who don’t have their own distribution systems.

Last season, the farm employed 21 people, mostly TH citizens. Dawson City, a town of 1,400 people, floods with visitors in the summer, the bars and casino buzzing under the midnight sun. The farm is drug- and alcohol-free and offers a quieter place for people to live. It’s a teaching and working farm where people can build skills while providing for their community. Much of the food is used in community meals or is donated to the TH wellness department’s social programs. 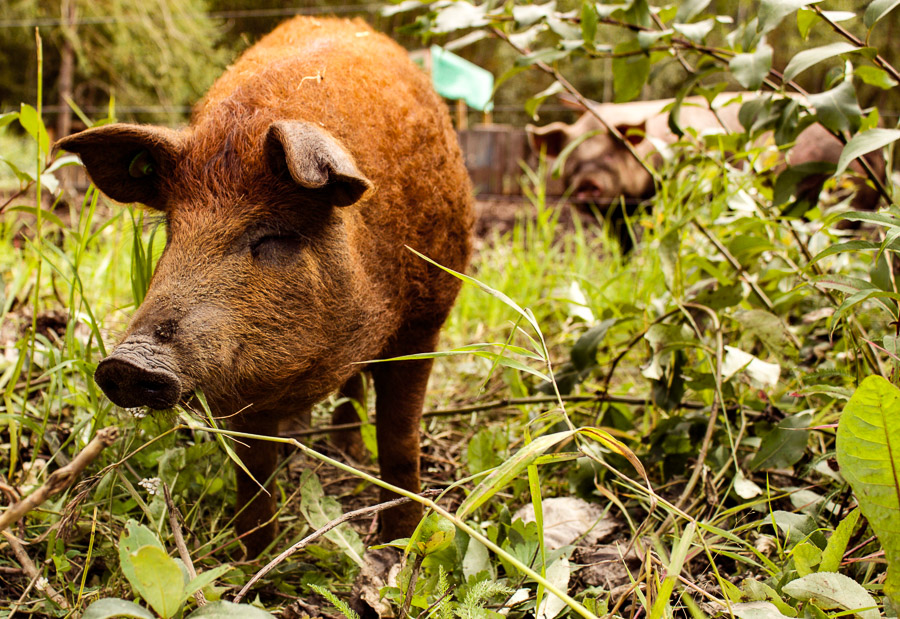 With COVID-19 more people in Dawson are thinking about food scarcity. Farm manager Derrick Hastings estimates that 90 per cent of the town’s food is trucked in from the south. If the food supply got cut off, he says, “it wouldn’t even take a week in the Yukon, and we’d be in shortages.” This year, people are “very gung-ho” for growing their own food, in community gardens and their own backyards. People are buying chicks, keen to have their own egg supply. The farm sells feed, straw and other inputs for agriculture at cost.

“There’s definitely way more demand this year than there has been in the past.”

The farm operates to recover costs, not turn a profit. While some local farmers are concerned about competition from a not-for-profit farm, Hastings says the TH Farm is helping future farmers gain skills and get established in the community.

“It's very much based on principles of equality and general compassion, as opposed to profitability,” says Hastings. Sales recover about a sixth of the farm’s costs; he’s hoping to push that up to a quarter this year, and the farm’s 10-year business plan aims to reach 50 per cent cost recovery. The farm recently won a $500-million Arctic Inspiration Prize, matched by the federal government, to build a cold-climate greenhouse that will extend the growing season nearly year round.

In response to COVID-19, the farm is ramping up production, but farmers in remote communities can only grow so much on short notice. Hastings says it’s important to invest in local producers before a crisis hits.

“Locally, people are starting to wake up to the fact that we need to own the means of distribution, to start investing in local production.