Ottawa-area marathoner Steven Jackson is one of only 39 people to ever finish the 6633 Arctic Ultra
By Samantha Pope
March 26, 2020

On day four of the world’s toughest footrace, Steven Jackson was marching along an ice road in the Northwest Territories when he looked to the side and saw what looked like petroleum railway cars rolling alongside him, stretching far into the distance.

Above him, he could hear an unsettling buzz of drones, and far to the right, he could see a Romanian opponent being interviewed by a documentary crew. Jackson knew there was no railway beside this lonely, frozen stretch of road, but his exhausted brain had begun to conjure visions from the snowbanks.

“I would do some breathing techniques and close my eyes, but every time I did that, the railway cars would get longer and longer,” he recalls. “I couldn’t walk beside that for six hours, so I just ended up sleeping right there on the side of the road.”

These vivid hallucinations from lack of sleep were not uncommon throughout Jackson’s nine day, 617-kilometre journey from the Yukon to the Northwest Territories. He estimates he slept a total of just 17 hours, making the 6633 Arctic Ultra unlike any race he had ever competed in before.

The Ottawa-born man was one of only two competitors out of 12 to finish the race this year on March 7 — and one of only 39 people to ever do so.

Over the past 12 years, the 6633 Arctic Ultra has earned a reputation among marathon enthusiasts as the toughest, windiest and coldest footrace on the planet. The race starts at Eagle Plains in the Yukon, and racers have 215 hours to complete a strenuous trek to Tuktoyaktuk, Northwest Territories.

As a long-time running enthusiast, Jackson has competed in the International Four Day Marches Nijmegen in the Netherlands, the Iron Warrior in Petawawa, and countless other marathons. He has travelled all across Canada, from the east coast to the west coast and even Nunavut, but prior to this race, he had never travelled to the western Arctic.

“When I came across this race, I saw that it was the race that could really check off Canada for me,” he explains. “I wanted to fully explore the country, so what a better way to do that than to walk it?” 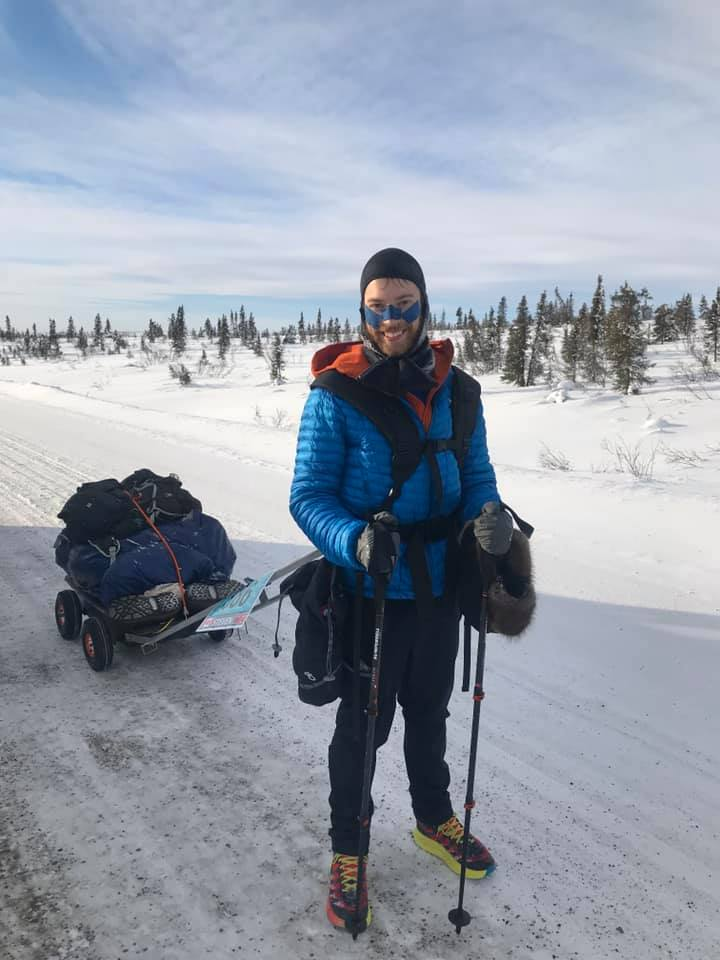 Jackson on day two of the race. (Photo courtesy of 6633 Arctic Ultra)

Preparations for the race ramped up in December, with Jackson running 40 to 80 kilometres a day while pulling a kit filled with various supplies like clothes, food, and sleeping gear. He would physically train six to 15 hours a day, three days a week, while also mentally preparing for the race by thoroughly researching the route.

Unlike past years, this year presented new challenges for racers because of the frigid temperatures. According to Stuart Thornhill, one of the race directors, this year was the most consistently cold yet, with average temperatures around -35C. Factoring in the windchill, temperatures occasionally dropped to -50 or -60.

On the second day of the race, Jackson trekked over Wright Pass on the Yukon-Northwest Territories border. Though the weather was beautiful for the majority of the race, he says this day was particularly difficult.

“The Yukon side was sunny and beautiful, but as soon as you cross over the pass, the wind coming off the Arctic Ocean comes full force and you are hit with winds going at 70 kilometres an hour from the north,” he says.

This intense wind blew snow across the route, up to Jackson’s calves in some places.

“I’d have to take my foot and hit the snowbank to make sure I knew where I was,” he says. “You’d have the mountain to the left, and on the right side, if you weren’t paying attention, you were going down the ravine about a hundred feet.”

Many competitors dropped out of the race early on because of frostbite or previous injuries, and by day six there were only two racers left: Jackson and Grant Maughan from Australia, who would ultimately win the race.

It was also day six when Jackson says he started to sleepwalk — a consequence of having slept only five hours total in the first four days of the race. 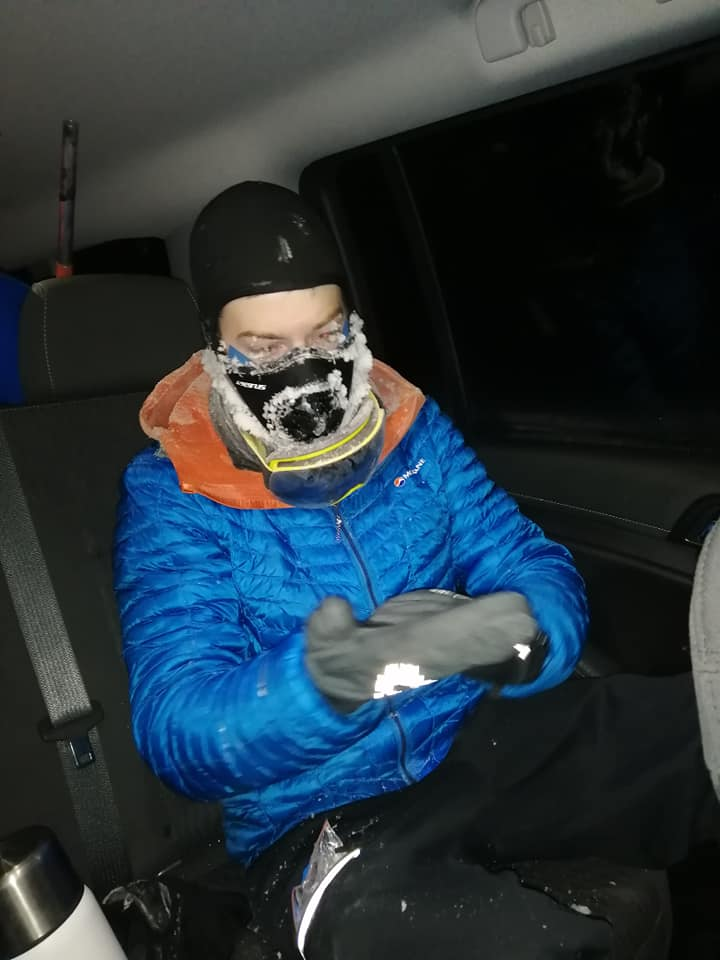 Warming up on day four of the race. (Photo courtesy 6633 Arctic Ultra)

“By day six, my brain started to melt together,” he says. “The toughest part for me was having my own strength turn against me.”

Finally, at 11:35 a.m. on March 7, Jackson crossed the finish line, completing the race in 214 hours. At that point, he says, he was so tired and drained that he didn’t feel a lot of emotion.

“I didn’t realize until a few days after the race what I had actually accomplished,” he says, adding it took about a week for it all to sink in. “I finally understood that this is something only 39 other people have ever accomplished in the last 12 years.”

Despite the challenges he faced during the race, he says being able to see the Yukon and the Northwest Territories in such a unique way was incredible. It even strengthened his love for running, he says, adding that he would run in the 6633 Arctic Ultra again.

“I loved running before, but I didn’t realize how much I loved it until this race,” he says. “I was just genuinely happy from start to finish no matter how difficult it got.” 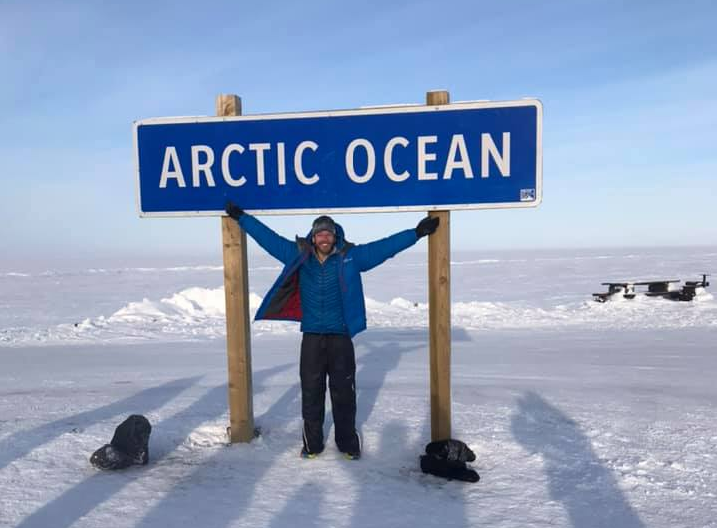 A smiling Jackson standing at the finish line. (Photo courtesy of 6633 Arctic Ultra)