It was an evening of emotional tributes and reflection on what it means to be Canadian
By Alexandra Pope
May 14, 2019

The event marked one year since the RCGS moved into the elegant glass-walled building overlooking the Ottawa River and began to animate it with public talks and exhibitions, workshops and celebrations, all aimed at advancing the Society’s mission of making Canada better known to Canadians and the world. It was also a time to imagine the future, in which the RCGS together with its honorary leaders, Explorers-in-Residence, network of teachers, volunteers and donors transforms 50 Sussex into, as Davis put it, “the sacred heart of Canada.”

Here are six highlights from the evening.

Alex Trebek thanked his fans, and we thanked Alex Trebek 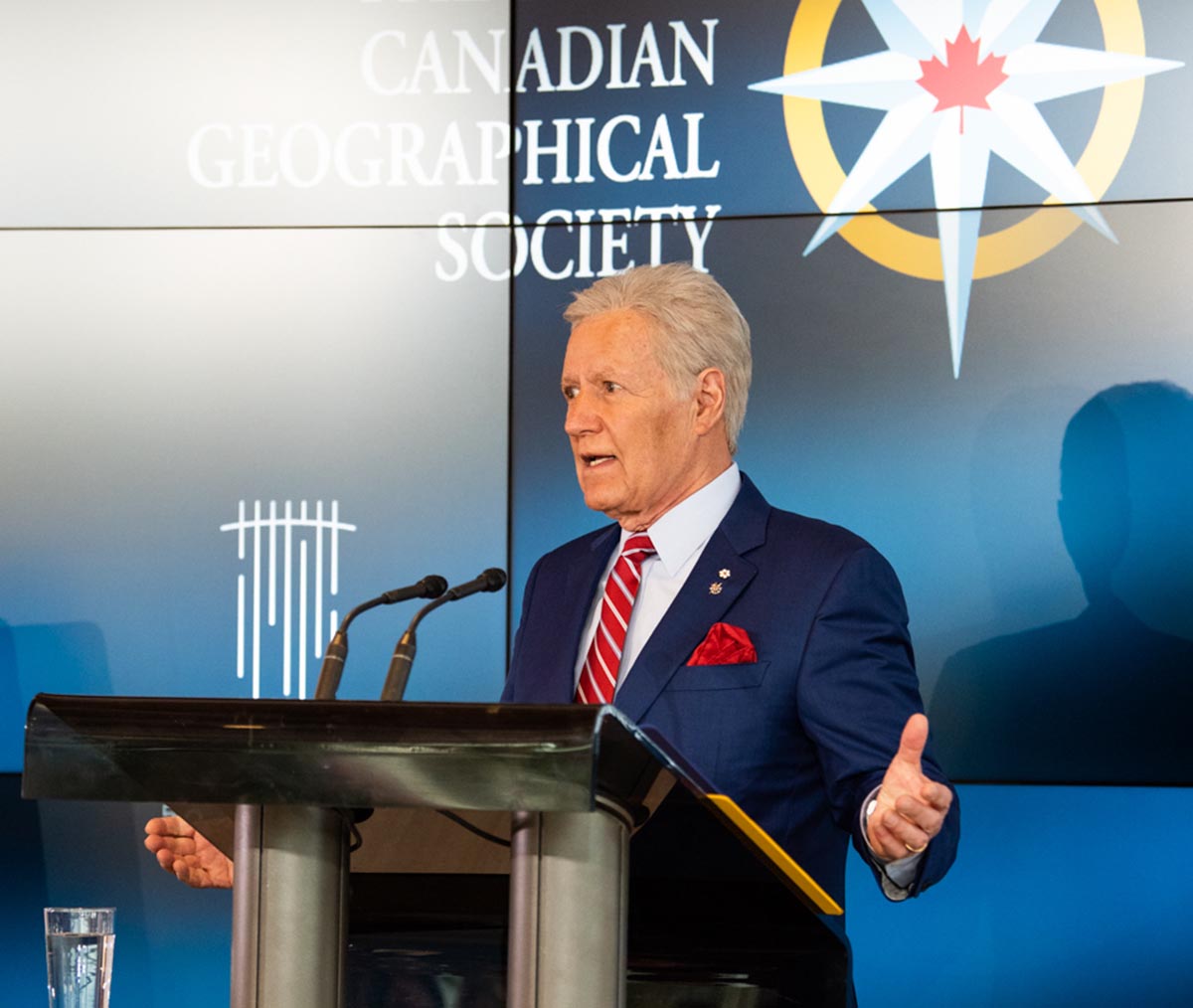 Alex Trebek addressed his health with characteristic wit and grace during his remarks at a VIP reception celebrating the official opening of Canada’s Centre for Geography and Exploration May 13 in Ottawa. (Photo: Andrew Lessard/Canadian Geographic)

For Trebek, the 50 Sussex event was the culmination of “a fantastic two weeks” that saw the beloved television personality take part in a walkathon for cancer patients and caregivers, receive his seventh Emmy award and complete what he hopes will be his final chemotherapy treatment. Speaking with characteristic humility and good humour in the theatre that bears his name, Trebek said that since revealing his pancreatic cancer diagnosis in March, he has received an outpouring of love and support from his family and from fans around the world — as well as holy water and “a lot of cannabis.”

“One of these things, or maybe all of them together, I believe are going to work for me, and I look forward to coming back to another event here at the Society,” he said. “To spend time with so many of you today and to absorb your love and good wishes has really touched me. I thank you, and we will meet again.”

The Prime Minister revealed he’s a Jeopardy! fan, and acknowledged a mentor 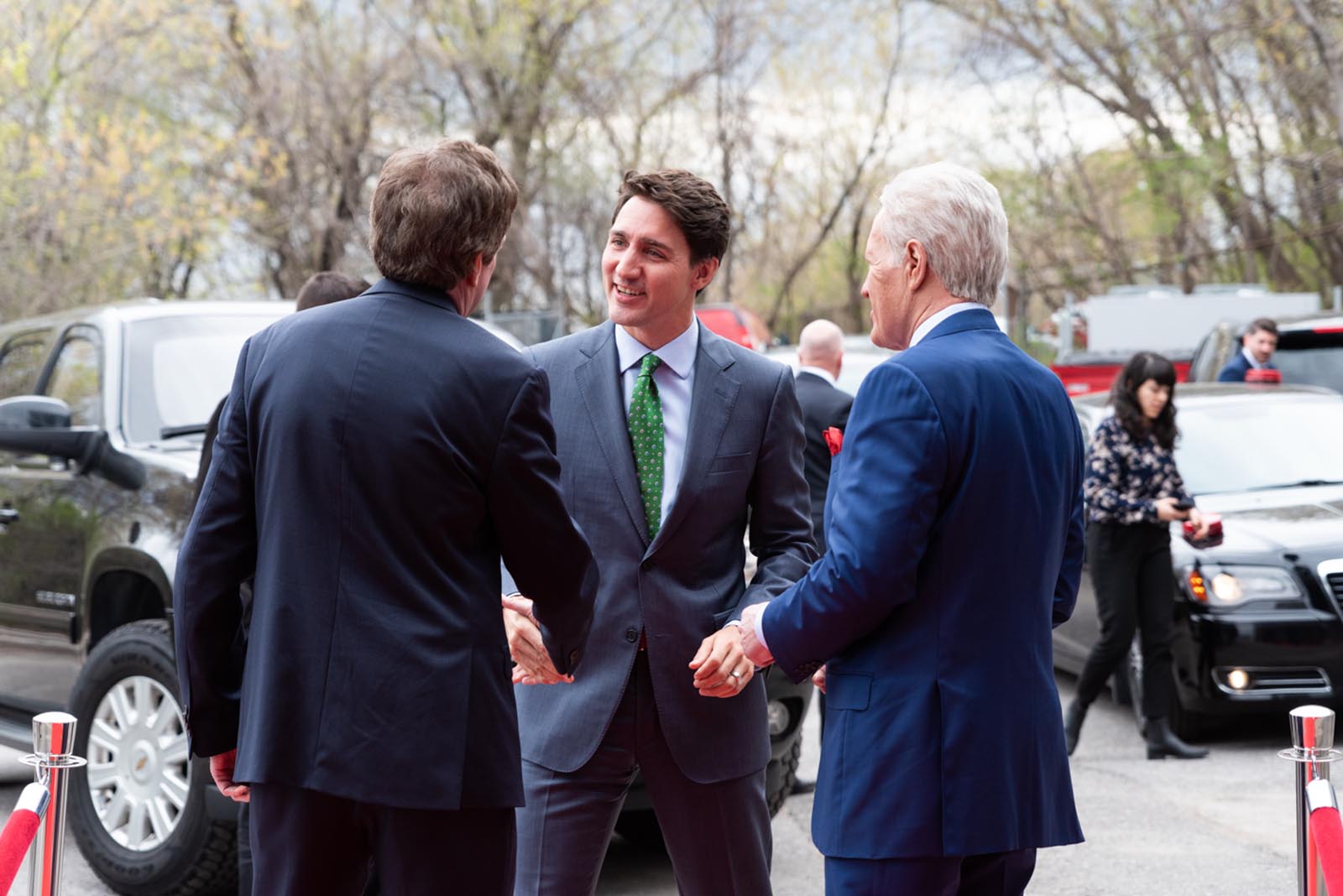 It’s probably fair to say that most Canadians have a memory about playing along with Jeopardy!, doing their best to outsmart the show’s contestants and its seemingly omniscient host, and it turns out the Prime Minister is one of them. Trudeau’s father, former Prime Minister Pierre Trudeau, didn’t believe in letting his kids watch a lot of television, with one exception: they were allowed to watch Jeopardy! after school.

“My brothers and I established a complicated system of scoring so we could actually play along; if we shouted out the answer before the contestant we got a point for that question,” Trudeau recalled. “It was a part of my life growing up and it enamored me not just with trivia, but with knowing the answers to as many things as I possibly could, a pursuit that served me well the rest of my life. I know I speak on behalf of all Canadians, Alex, when I say thank you for everything you have done and everything you continue to do.” 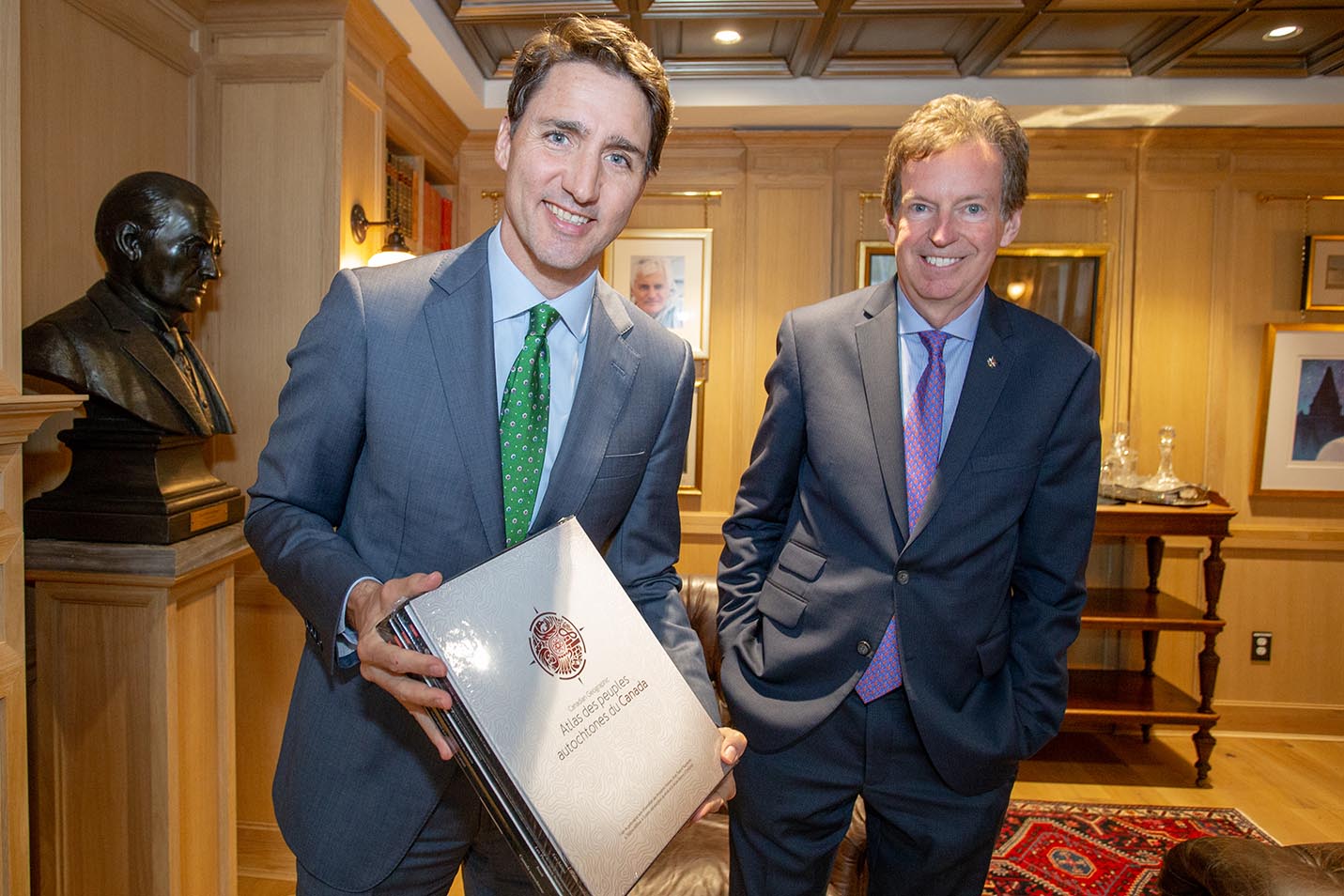 .@RCGS_SGRC Honorary VP @drjoemacinnis recounts a phone call with PM @JustinTrudeau’s late father, made from Sub-Igloo at the bottom of the Northwest Passage. The phone he used is now housed in the Sir Christopher Ondaatje Fellows Reading Room at @50SussexEvents. #Hello50Sussex pic.twitter.com/uWwIdOn09G

We celebrated a successful first season for the RCGS Resolute

Since its inaugural voyage for One Ocean Expeditions in November 2018, the Royal Canadian Geographical Ship Resolute has kept up a busy sailing schedule, most recently transiting the Panama Canal. In honour of the ship’s successful first season, and in celebration of the strong partnership between the RCGS and One Ocean Expeditions, OOE managing director Andrew Prossin presented Geiger with a framed photograph of the Resolute in what could probably be termed its natural habitat: surrounded by enormous icebergs in Antarctica.

In 1992, when Dr. Roberta Bondar became the first Canadian woman and the first neurologist to go to space, missions were short. She spent just nine days in orbit, but during that time, she got a good look at Earth from above — and knew that she wanted to see it from the ground, too.

Now in “the Earth exploration phase of being an astronaut,” the Honorary Vice-President of the RCGS has made it her mission to share Canada with the world, “and let them know it’s not just about our passport and our Tilley hats: it’s about the energy that we have and it’s about the new ways we have of looking at things. It’s about our natural heritage, it’s about our cultural heritage. It’s about how we have growing pains the way other people have, but we deal with them in a much more respectful and dignified way, and going forward, that will be the template of how we grow this wonderful country.”

To celebrate the Society’s global impact through its expeditions and outreach, Bondar presented Geiger with a crew mission patch that flew aboard the Space Shuttle Discovery on mission STS-42, the first International Microgravity Laboratory Mission (IML-1) from January 22 to 30, 1992, as well as her “very limited edition” personal crew patch.

After listening to the remarks by Trebek and Bondar, Davis took the podium and wondered aloud what it is that provokes “such deep humility” in Canadians — then posited that in fact, it’s Canada’s geography. It’s “the weight of the North that hovers over our national imagination and defines the essence of the national soul.” It’s the fact that for much of our history there were more lakes than people in this land. It’s the reality that even as we’ve become an increasingly urban people, we’re never far removed from the wilderness — as evidenced by the black bears that occasionally wander into Vancouver’s suburbs to catch spawning salmon in neighbourhood creeks.

“To be Canadian is to know the wild,” Davis said. “It’s to know how to paddle a canoe, it’s to dream of having a cottage on the edge of the wilderness, it’s to be able to tell your children the names of the plants and describe the behaviour of animals.”

As Canada becomes an ever more pluralistic society, Davis said, the RCGS in its new home is well-positioned to be the place where Canadians come to discover their country — “the place where, in a completely non-partisan way, whoever does rule this capital city of ours can come and know that this, even more so than Parliament Hill, is actually the sacred heart of Canada.” 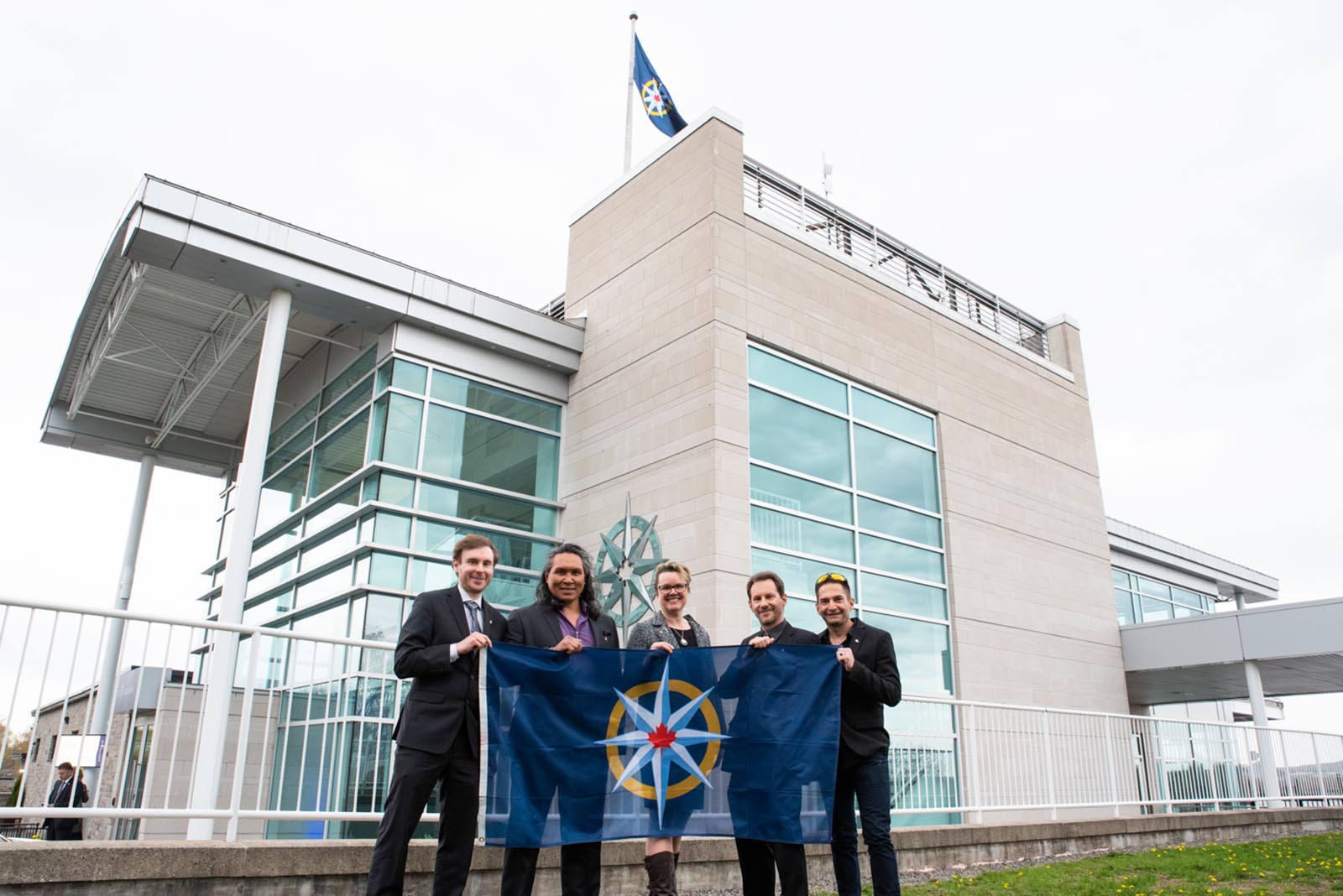 As the formal portion of the event wound down, three of the five current Explorers-in-Residence of the Society — Jill Heinerth, George Kourounis and Adam Shoalts — took the stage to welcome a sixth member to their ranks: accomplished actor, athlete, motivational speaker and global ambassador for Inuit culture Johnny Issaluk.

“I texted my friend and asked her to tell me about myself,” a nearly-speechless Issaluk joked, to warm laughter from the audience.

“I just wanted to say thank you from my people,” he added. “I’m here because I do what I love. I just represent who I am, where I come from, and what the land gives and what the ocean gives.”

I'm so proud to have announced Johnny Issaluk's addition to the ranks of Explorer in Residence of the @RCGS_SGRC at the official opening of our new headquarters @50SussexEvents. He is a great man! https://t.co/jPxCj3LUBv

Related: Welcome to 50 Sussex, Canada’s Centre for Geography and Exploration