Environmental benefits and food sources from this low-cost form of farming might be the future
By Hannah Waye
October 28, 2020

Looking for a low-cost and resilient way to make a living on the water? Regenerative ocean farming — a new way of looking at growing food that utilizes the entire water column (from surface to ocean floor) to grow materials that can be used for everything from food to biodegradable plastics — might be the answer.

On what regenerative ocean farming is

Traditional aquaculture is farming the ocean, and we're sort of a subset of that. The way we think about it is we make things you don't have to feed and [that] don't swim away — there are thousands of things in the ocean that fit those criteria. We're on this journey of regenerative agriculture, which asks "can we grow crops that not only require no fresh water, fertiliser, or heat, but also have a positive impact on the environment?" So sequestering carbon, nitrogen, rebuilding reefs, that plays this role in the ecosystem — that's sort of that's what this idea is, beyond sustainability into a regenerative model is where we need to go, especially with climate change.

But in a very practical sense, it is farming — you farm 20 acres of water, growing a mix of seaweeds and shellfish, and we use the entire water column. It's very efficient and sustainable a lot in small areas. And we grow different crops at different levels of water. So the seaweed is on the surface downwards, our mussels a bit below that, our scallops grow on the top of the water column too, oysters are down below on the seafloor, and clams are down in the mud. It's this vertical integrated system, but it's really affordable — a regular person like me can do it because all you need is 20 acres and a boat and, depending on where you are, about $20,000 to $50,000 and you're up and running. That makes it unlike turnstile aquaculture, which is very capital intensive and costs millions and millions of dollars. We're able to do this so regular folks could start their own form of career, support the local economy, help raise their families and actually own their businesses completely.

On the benefits of regenerative ocean farming

Think of it more as sort of a community park where people can come and the only thing they can't do there is grow shellfish and seaweed. Then the environmental benefits are that we capture carbon and nitrogen. Without [these] being taken out, it creates dead zones in the water — there's more than 700 dead zones around the globe, because there's too much nitrogen.

It's zero input food, so no fresh water, no fertilizer, no feed. That makes it the most sustainable food on the planet. So what happens to it? Our shellfish does great in the local markets. There are mussels — people love those. With seaweed, the question we get is what do we do with all of it? Seaweed is kind of gross, so the question is really how to un-seaweed seaweed, how to reimagine it into something at the centre of the plate that's delicious.

One of those first dishes we did was we took our seaweed and turned it into noodles. We also do these plant-based burgers, we do bouillon cubes, pickled stuff, all sorts of things

You can [also use seaweed] for fertilizer, it's packed full of nutrients that land based farner's need, we use it for animal feed and we'll use it for compost. Then our partners are turning it into seaweed packaging. It's 100 per cent seaweed based, so that's a fascinating thing where we can instead take the seaweed, and turn it into a plastic alternative that's compostable.

On being more than food

We use a lot of sensors on our farm and package that data as a crop and you can sell that to insurance companies, tech companies, government agencies who want to track what's happening in the water. That way as a farmer you have all these different income streams. That adds up to resilience, so if your crop fails, well, you can still sell data that year.

The other thing is you can farm year round, but you could also just farm one season. As an example, kelp is a winter crop, and a lot of fishermen call winter the "shoulder season." As a fisherman, you can be chasing fish three quarters of the year, and one quarter the farming is already close to home. It is a diversification strategy and as a former fisherman, my goal is "How do I stay on the water?" I'll grow anything, I'll catch anything just to stay on my boat. 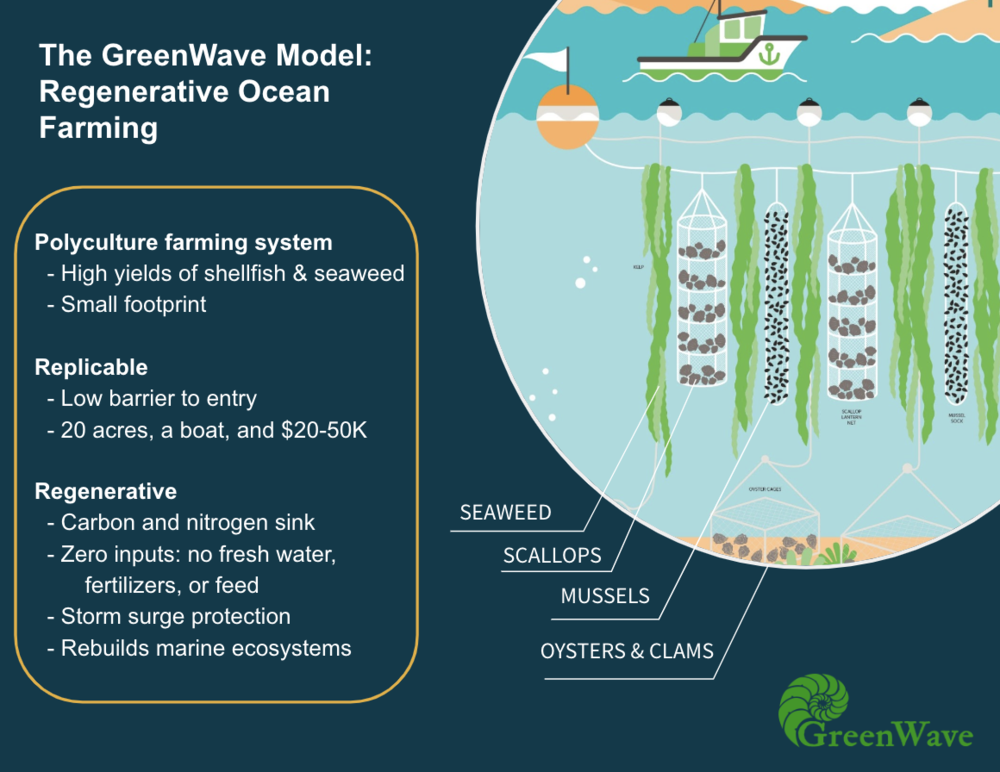 On starting and running GreenWave

I decided that a measure of my success was helping fishermen like me, putting them back to work and still allow them to live the lives that they were built for. I wanted to create jobs for my community. So what I decided to do was create GreenWave, which is a nonprofit to train the next generation of ocean farmers. We're in seven states and we're just starting to work in Canada as well, with the goal to train 10,000 farmers in the next 10 years. We just opened and supported the first Indigenous-owned seaweed hatchery in the U.S. in Alaska.

We've got a training program and we're putting out just next month an online training platform, which allows people to design their own farms gives them the tools, because we have requests, we have more than 6,000 people on a waiting list for our program, just in the U.S., and we've got requests to start farms in 105 countries.

I think there are literally millions of us on land, out in the water, out there that are part of this new climate economy and really put a lot of our our assets at work and sort of solving the problems and challenges of the future.

On the future of farming as a whole

I think the future is encouraging regenerative ocean farming. Anybody who is producing food that doesn't require land, doesn't require inputs like water and feed and stuff like that, it's just going to be really affordable food. So that's going to move it to the centre of the plate — corn, beef, chicken and salmon prices will go up as water becomes more expensive, all these different things will become more costly. The other thing is there is something interesting happening here in the U.S., which is that we think of the ocean a lot as a victim, of pacification, of overfishing and slavery on shrimp boats, all this sort of stuff. I think there's a chance here to turn around and look at the ocean, not as a victim, but as sort of a partner in this new era of climate change. More of the U.S. is under water than above and our seas are rising. I see that as more farmland — which can sound cold, but is true.

On how entrepreneurship has changed his life

I still get to keep this soul of what a fisherman is, and the soul of a fisherman is owning their own boat, having a self-directed life, no boss, succeeding and failing on your own terms, and then feeding their community. I can't chase fish anymore, but I still get to do that kind of job and living that we can write and sing songs about. Those soul-filling jobs, jobs with meaning, that make me go out on the water and I feel like it's a fulfilled life that I've done something useful.