To take photos of polar bears in Wapusk National Park, Man., Daisy Gilardini has to go on a journey. In early spring, after a flight to Winnipeg, then to Churchill, Gilardini takes a train south toward Chesnaye, about 40 kilometres from Churchill as the raven flies. In the middle of nowhere, now in pitch darkness, the train stops. In the bone-chilling cold of a -40 C Arctic night, northern lights swirl overhead as she hauls her bags of photography gear off the train. From there, it’s a bumpy drive over frozen tundra to Wat’Chee Lodge — the only licensed operator that can take people to see polar bears in Wapusk, the southernmost polar bear denning area in the world. 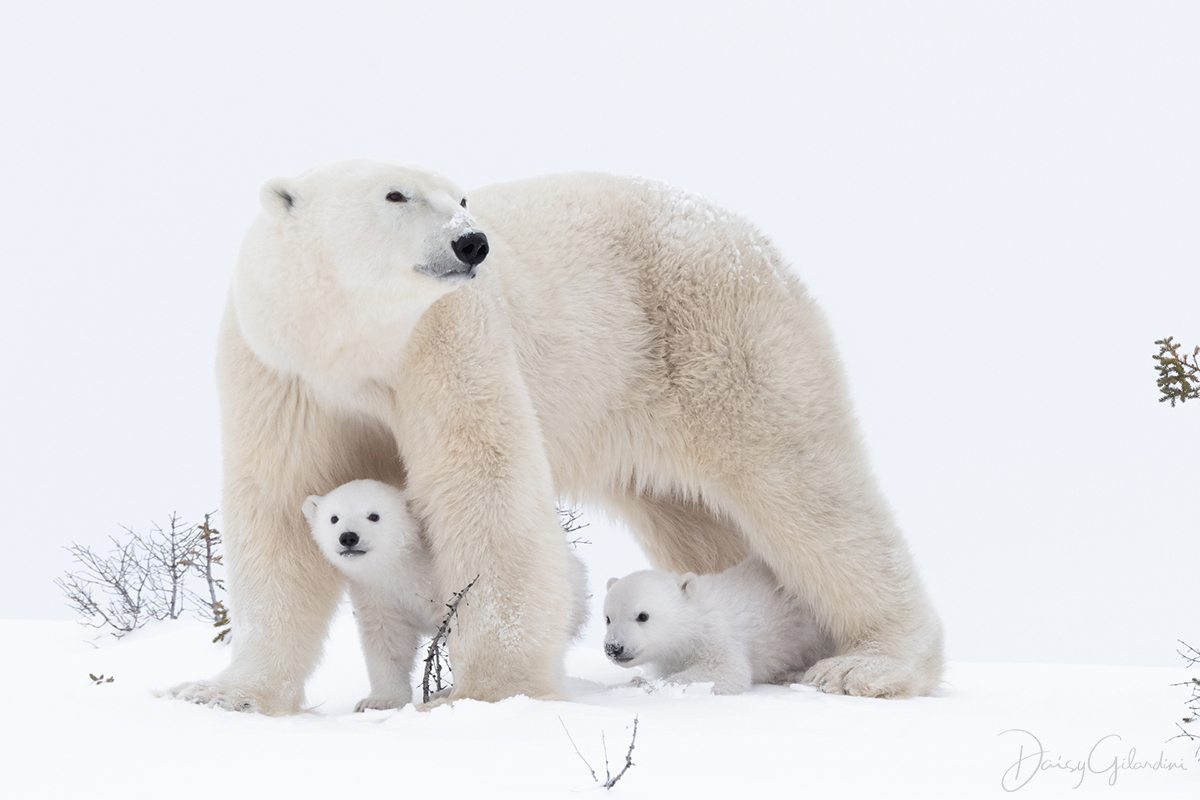 Gilardini has been making this trip since a holiday to Canada in November 1999, when she was working as an accountant in Switzerland. Her first sight of polar bears brought tears to her eyes. She fell in love and has since followed her passion for the polar regions all over the Arctic. She became a full-time photographer in 2006 and, just under a decade later, photographed a mother polar bear and her cubs emerging from their winter den for the first time. 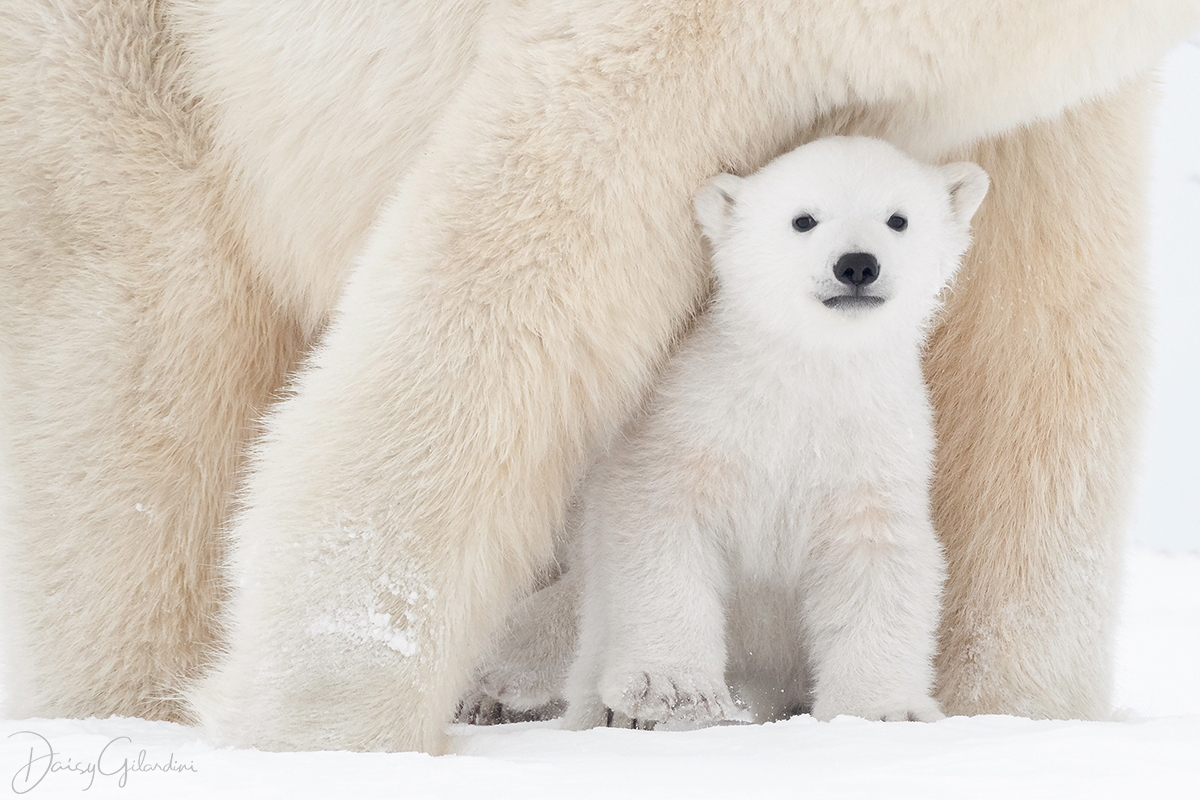 Mother bears in Wapusk dig their maternity den in October, usually in the snow but now, more often, in the soil. She gives birth to her cubs a month later, and the little family spends the winter in the den. The den is warm, dark and cosy, with only enough space for the mother to sleep and turn over. There is not enough room for her cubs to play, to fight, to explore. They feed and grow and sleep. 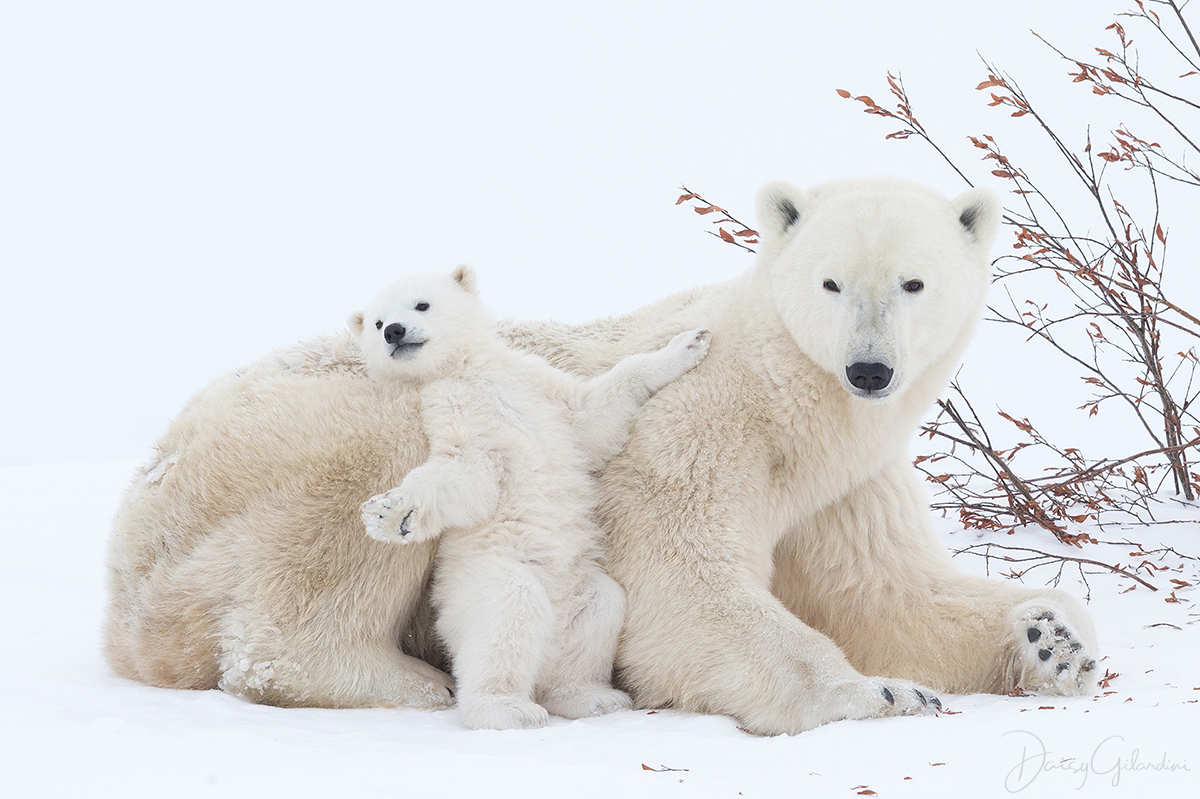 In late February to March, when a feast of harp seal pups awaits them to the east in Hudson Bay, mother bear knows it’s time to emerge. Far away on the other side of the den, Gilardini is waiting, watching through a long telephoto lens. It is not an easy shoot, and there is no guarantee she will see the bears. The only guarantees are bumpy rides on the frozen tundra and many hours sitting in a van. Temperatures can drop as low as -54 C. Winds can gust up to 60 kilometres an hour. One time, Gilardini waited 113 hours to photograph a mother bear leaving her den. Yet still, every year, she waits. 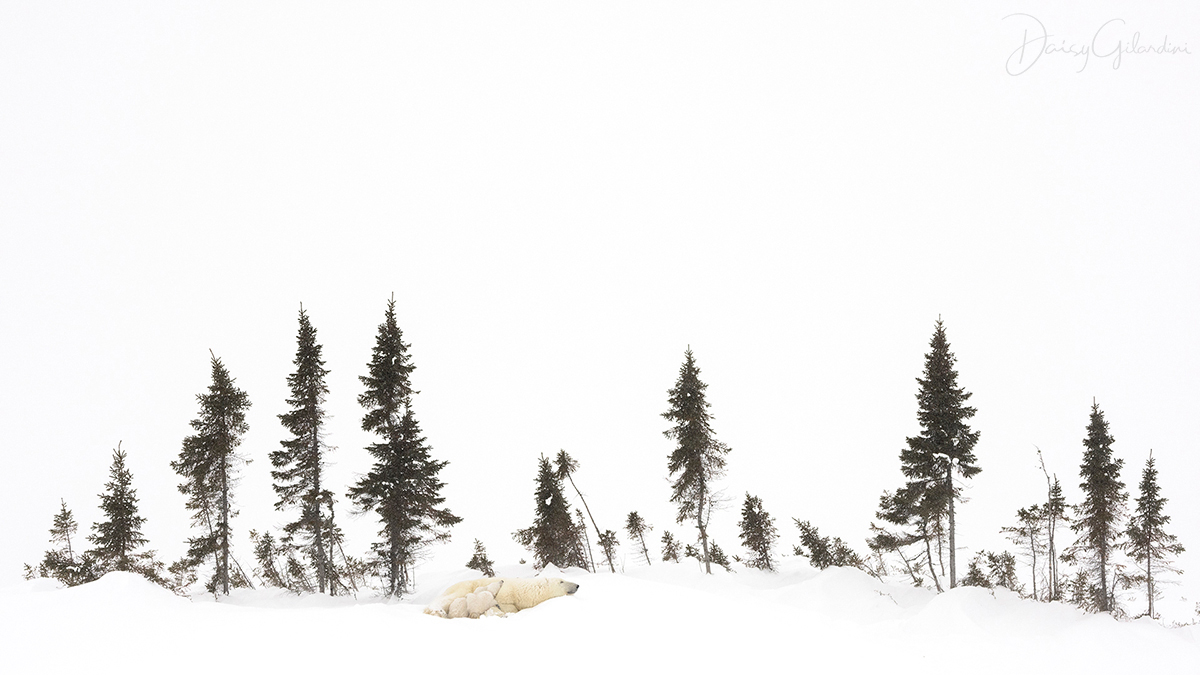 Then, suddenly, mother bear pokes her nose out into the open air. She retreats, peeks out again, withdraws. Eventually, she emerges fully. The first thing she needs to do is clean her fur, having not had space to do so in the last four months. She rolls in the snow until her fur is bright white and fully insulated against the Arctic elements. Then she calls out her babies. Through the lens, Gilardini can see the mother’s lips flapping as she “talks” to her cubs. 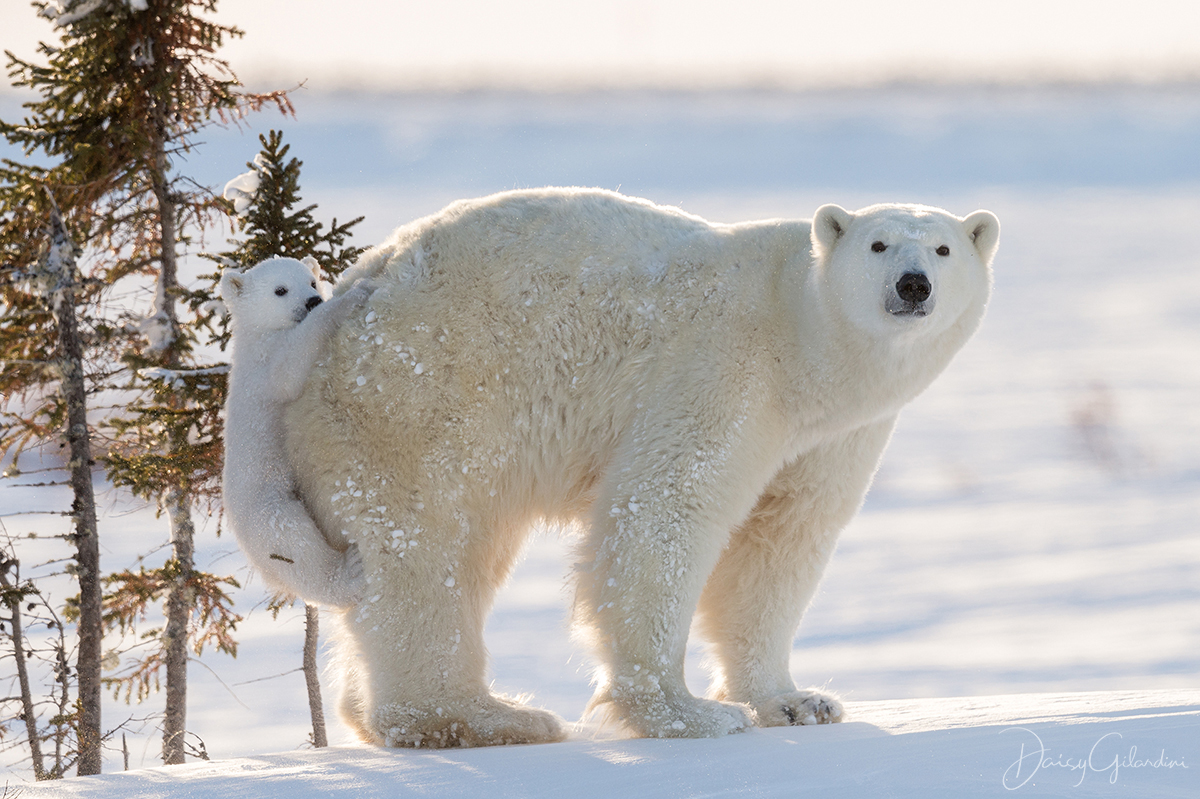 The cubs are on a voyage of discovery under the watchful gaze of their mother. They’ve spent the entirety of their little lives in the safety of the maternity den, and it’s a whole new world out there. They discover snow for the first time. They discover they can run, play and fight. Everything is designed to make them stronger, to build muscle, to get used to the cold. 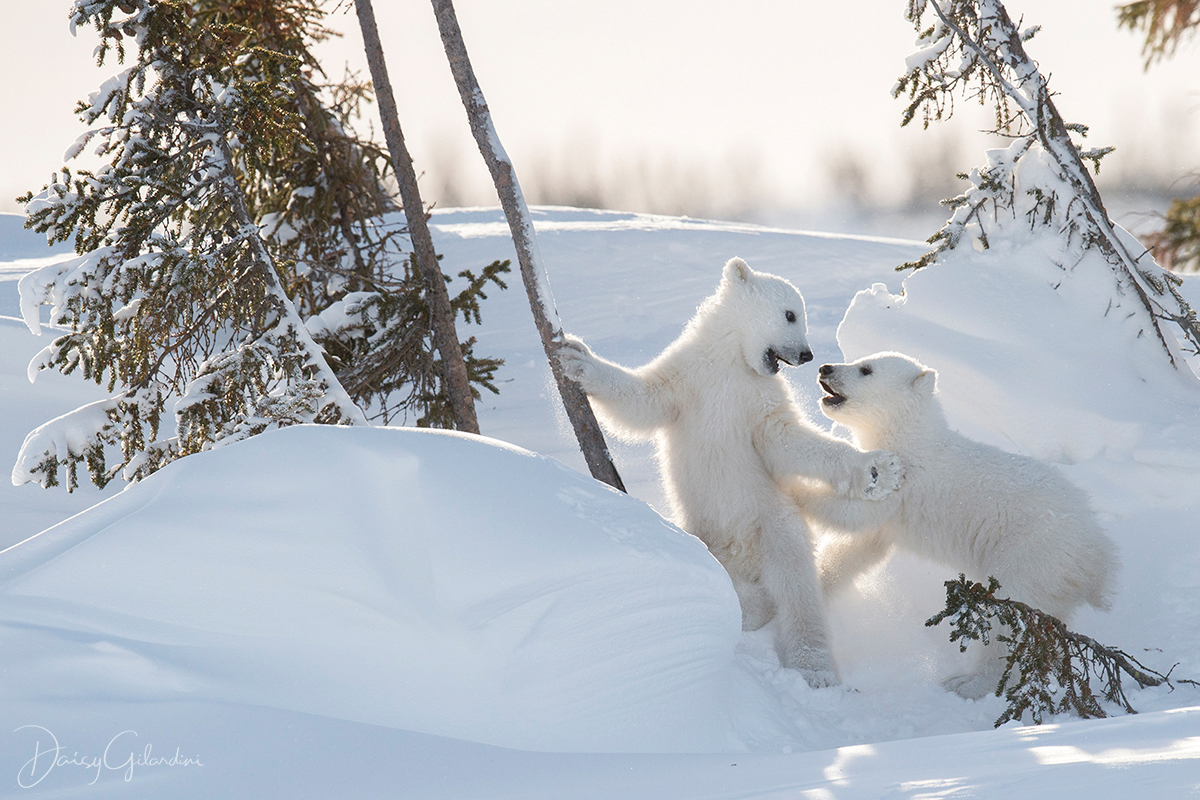 One hundred metres in the distance, Gilardini is snapping away like crazy. Through her viewfinder, she can see the individual furry facial expressions of the cubs as they play, their different characters. For Gilardini, it’s the most joyful thing she can witness. It’s a sight that gives her hope. 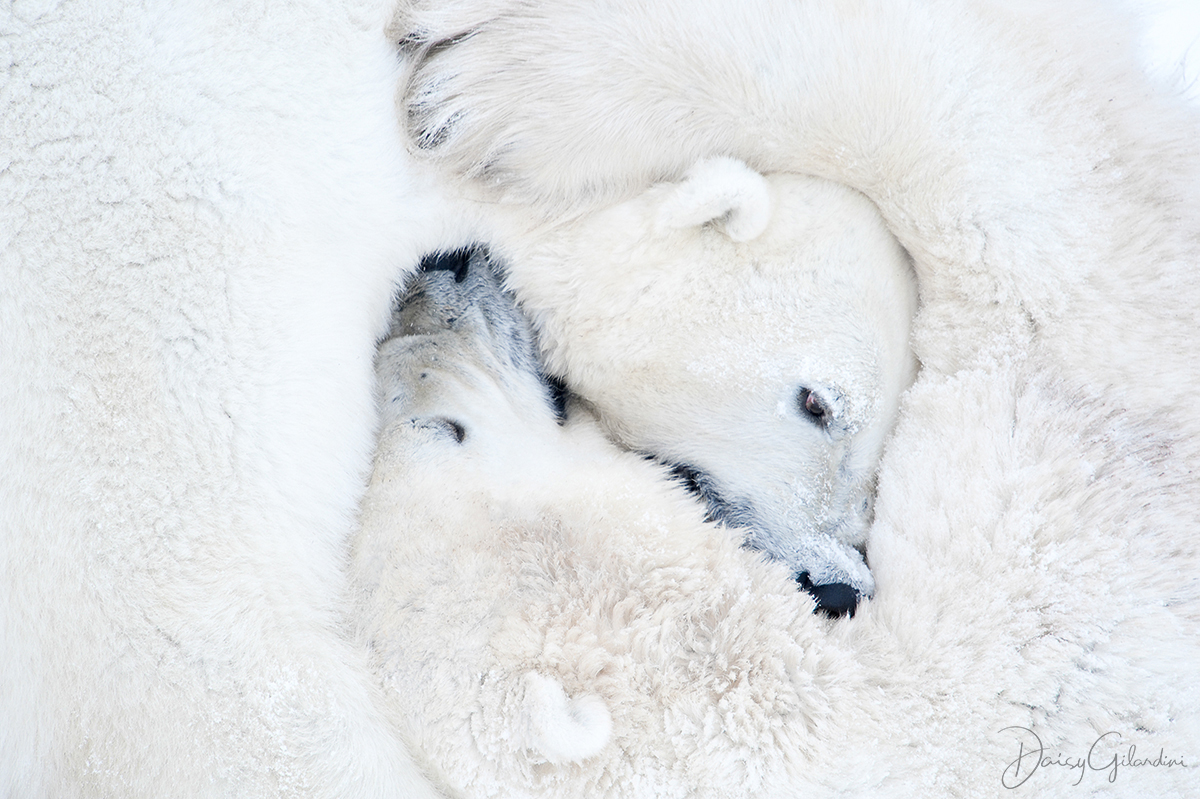 Unbeknownst to the bears, their future is uncertain. As a conservation photographer, Gilardini has witnessed polar bears’ environment changing around them: soaring summer temperatures; sea ice on Hudson Bay forming later, melting earlier; shorter hunting seasons. On the other side of the polar region in Svalbard, Norway, climate change has seen glaciers leaking into the ocean and the ice caps melting, leaving polar bears stranded in the open ocean. It used to be common to see mothers in Wapusk with three cubs. Now, more often, it’s one or two. This year, two mothers were tracked in the denning area with no cubs. That’s something that Gilardini has never seen before in two decades photographing the bears. 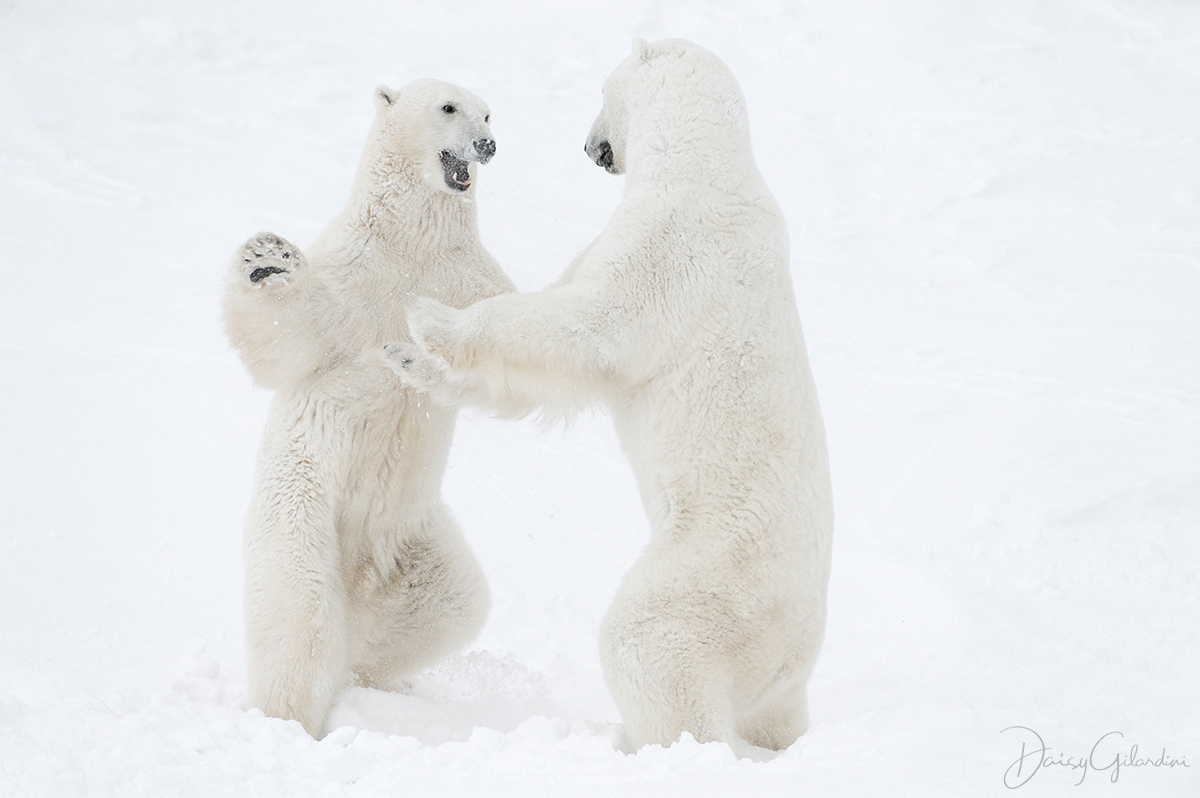 Gilardini sees it as her duty to be an ambassador for the bears through her photos. When her photo “Motherhood” (opening image) won the grand prize at the 2016 Nature’s Best Photography Windland Smith Rice Awards, she was honoured by the recognition. But, more importantly, the image, and accompanying video, was exhibited for a full year at the Smithsonian Natural History Museum in Wash- ington, D.C. — this meant that millions of people were exposed not just to the beauty of the image but to the plight of the polar bears captured by it. Gilardini believes in the beauty of an image to convey a message, for people to forge a connection to these creatures that are the eponym of Wapusk, which is Cree for “white bear.” 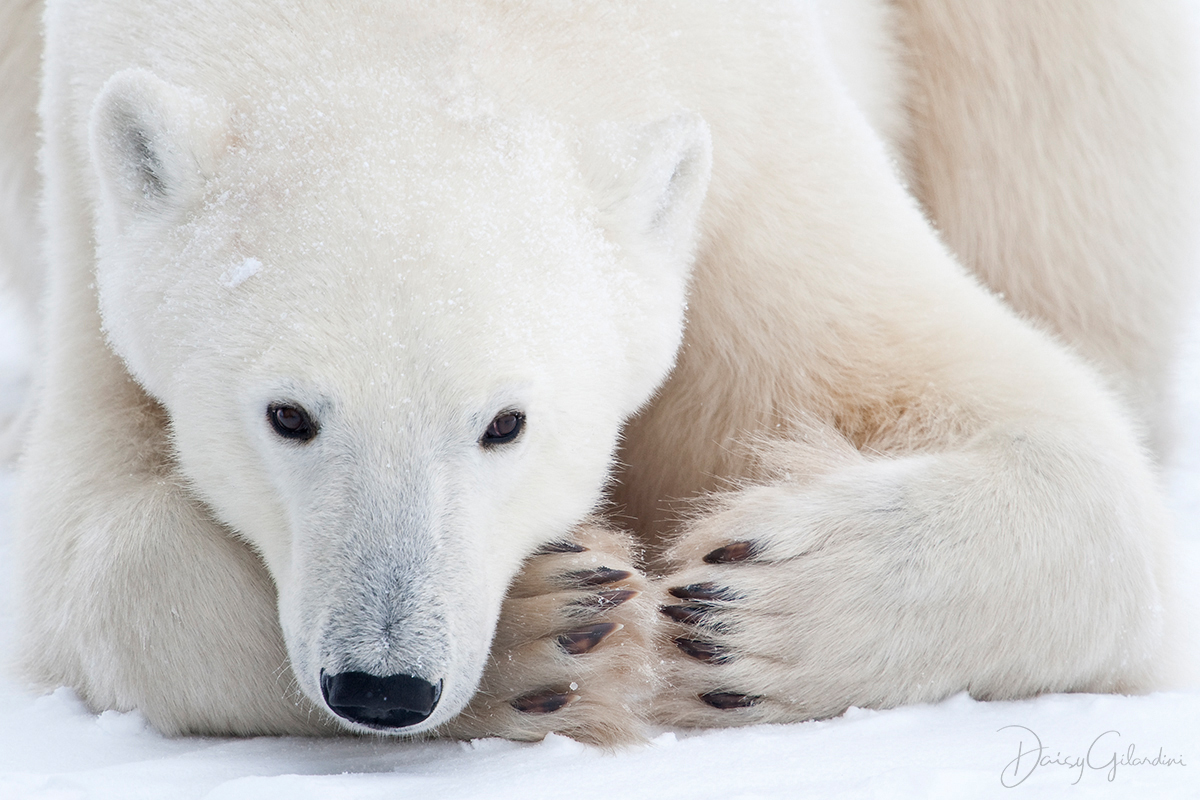 For the baby bears rolling in the snow, it’s a brave new world. And it’s the photographers braving the Arctic ele- ments who give them a voice to speak to that world. 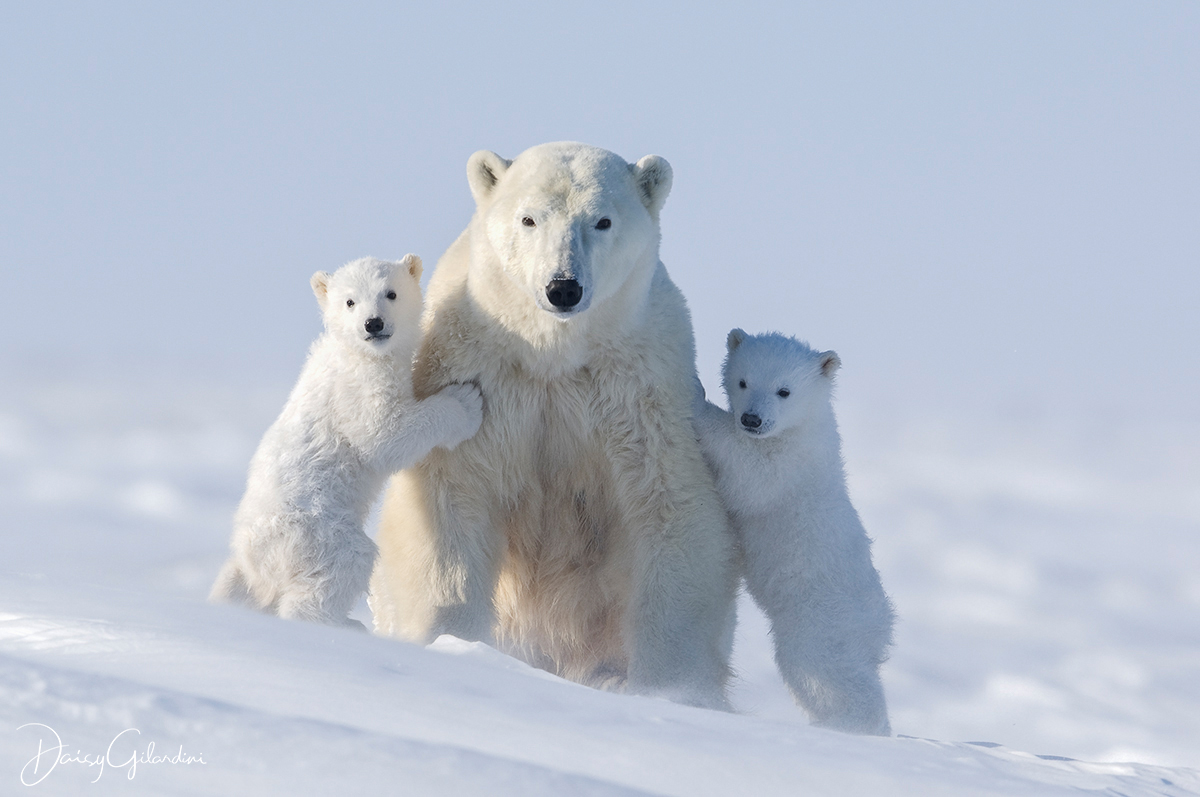 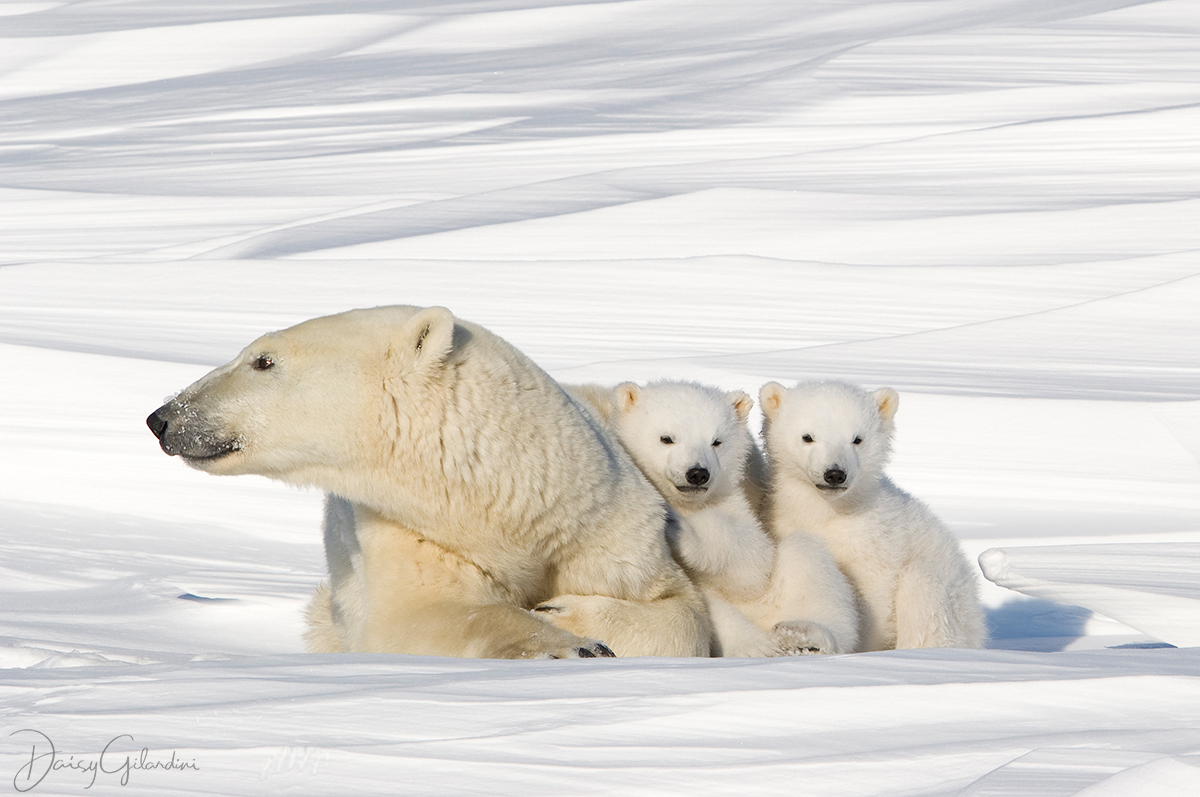 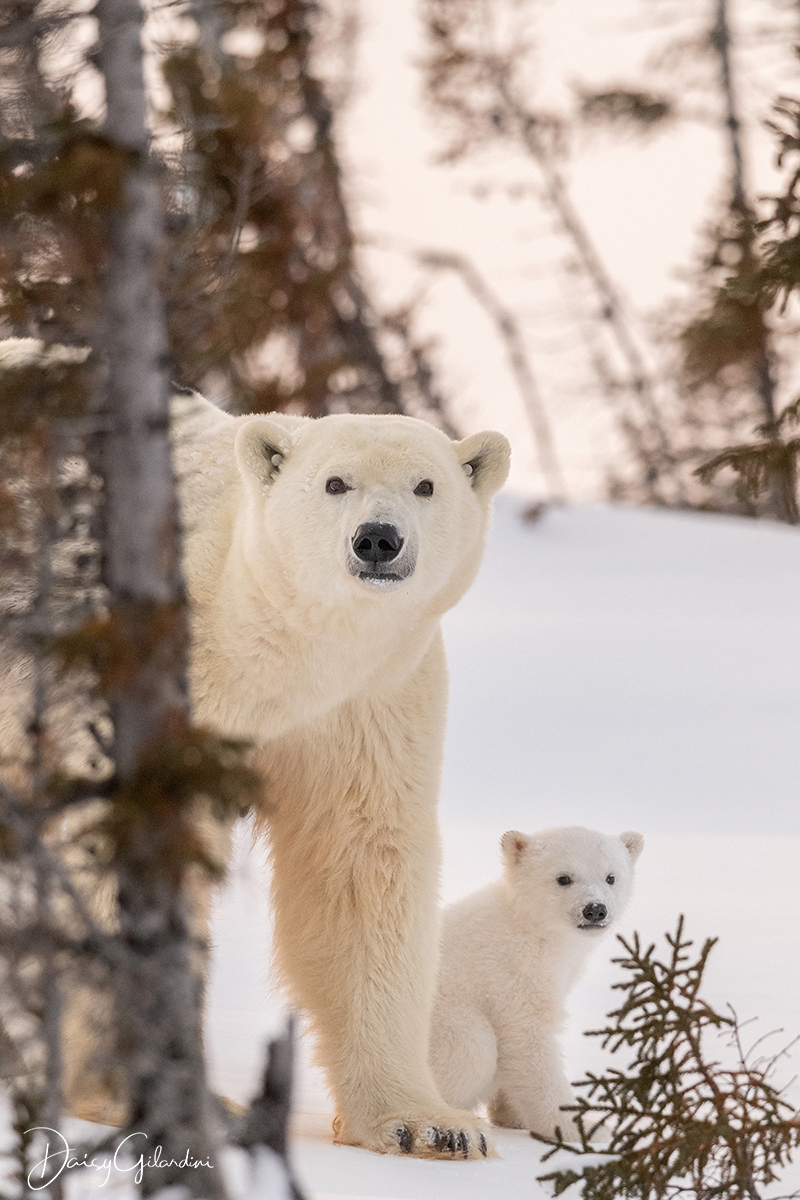