Migration in the time of climate change | Canadian Geographic

Sitting in front of a computer in my office at the University of Manitoba, I close my eyes and picture a small bird flying over a dark ocean. On my screen are migration data retrieved from a GPS tracking tag carried by a purple martin. These palm-sized marathoners, wrapped in a sleek coating of iridescent purple-blue feathers, make an epic migration from Canada to Brazil and back each year.

The data retrieved from the tracking tag tells me that this particular bird flew more than 1,000 kilometres out over the Caribbean Sea, a non-stop flight that takes more than 24 hours to complete. It worked out well for this individual — it survived to tell its migratory tale — but I can’t help but wonder about the new hazards that birds now encounter along the way.

It’s a well-worn cliché that timing is everything, but this is nevertheless true for a migratory bird. They must synchronize their movements with good weather and abundant food to sustain them across hundreds to thousands of kilometres of migration. Evolution has generated some amazing timing mechanisms to get birds in the right place at the right time. For example, some birds are sensitive to subtle changes in day length as the season changes, which triggers the start of their migration and breeding. The consistency of seasonal change in day length had been a highly dependable cue for when to find good weather and food during migration. However, in recent years, climate change has begun to send mixed signals.

During an early spring, some long-distance travelers may arrive too late for the bonanza of insect food they need to raise lots of young. This subtle effect of climate change has led to population declines in some species of birds. During migration itself, birds may encounter more unpredictable weather, a greater frequency of storms, or uneven climate change effects across a migratory route. To this growing list of challenges we can also add hazards such as habitat loss, urban development, and light pollution. For birds to survive in our changing world, they will have to be flexible in their migratory timing, and in some cases, the routes they take on migration. How flexible they can be remains an important question to be answered in migration and conservation research. 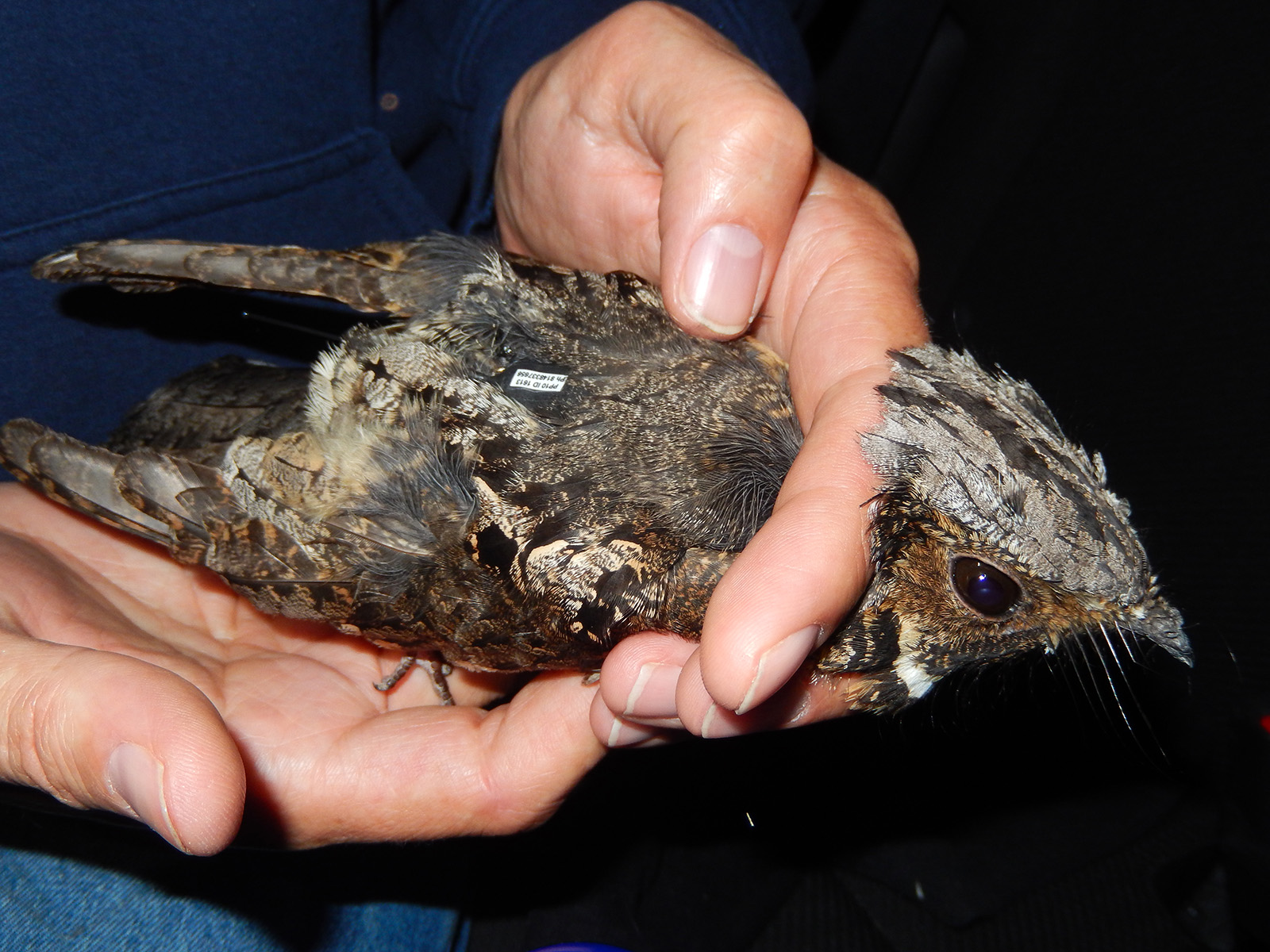 A whip-poor-will is outfitted with a tiny tracking tag that will send data about its location to various receiver stations along its migratory route. Improvements in tracking technology are allowing researchers to get a more detailed picture of threats migratory birds face as they travel across continents and oceans. (Photo: Alex Mills)

What makes an “early bird?”

New tracking technologies provide researchers with opportunities to get out of the lab and study migration timing in the wild, during migration itself. Migrating and breeding early can have lots of advantages for birds, particularly considering the advancing arrival of spring weather that we find in many parts of Canada. But is an early bird born an early bird, or can these habits be learned?

To track the first movements of young birds, we are using a new, automated radio-telemetry array called the Motus Wildlife Tracking System. This is an international collaborative project involving researchers, NGOs such as Bird Studies Canada, and interested citizens who install receiver stations across the landscape. These receivers can detect and log the unique radio signals emitted by tiny tracking tags attached to birds. The system can even be used to track the movements of very small migrants, like dragonflies.

We outfit the birds we study with tiny, radio-tag backpacks that emit a uniquely coded signal every 10 seconds. When birds come within about 20 kilometres of a receiver, their signals are picked up and logged, creating data which can later be used to reconstruct their movements and timing.

These new technologies are very useful for answering questions about migration timing. My PhD student Saeedeh Bani Assadi is looking at how light pollution and other environmental factors impact the individual timing of purple martins as they leave their nests and migrate for the first time. The receiver stations in the Motus network tell Saeedeh exactly when the nestlings start their very first fall migration from breeding sites in Canada on their way to distant overwintering sites in the Amazon region of South America.

Many migratory bird species are declining, and if we wish to conserve ‘our birds’ then it is essential to build strong international relationships to research and protect these species across their full ranges – including, for the purple martin, migration routes through the U.S., Central America, the Caribbean, northern South America, and overwintering areas in Amazonian South America. Our purple martin team includes the Purple Martin Conservation Association based in the U.S., the Instituto Butantan in São Paulo, Brazil, and the National Institute of Amazonian Research in Manaus, Brazil. 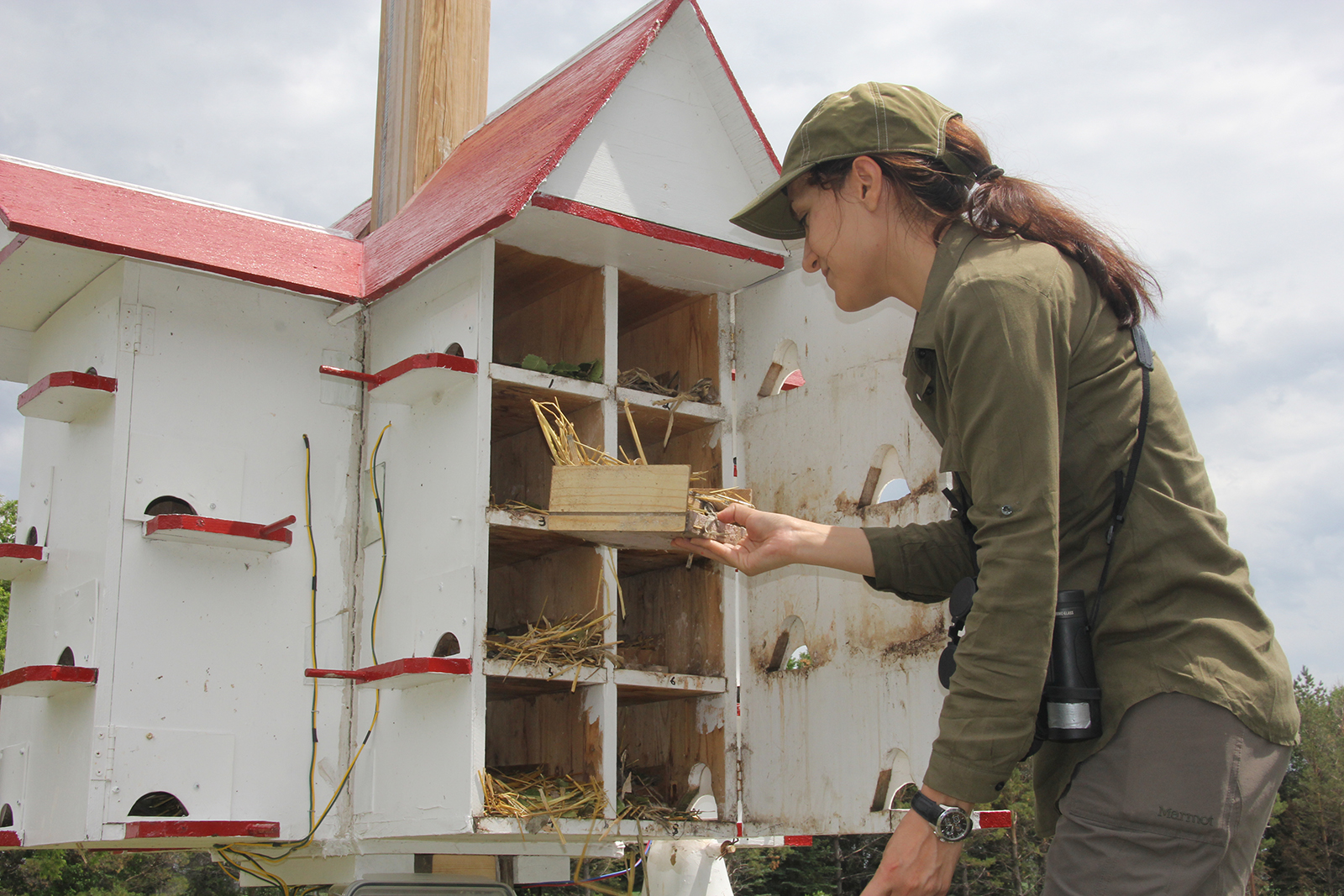 The future of migration

Soon, we will be able to use a new tracking system that offers the chance to study movements in real-time. The International Cooperation for Animal Research Using Space (ICARUS) will use a receiver mounted on the International Space Station to detect signals from special tracking tags deployed on wildlife anywhere on the globe. We’ll be able to better understand how birds time their migratory movements as they confront hazards during their journey, and we will learn their fates even if they end up in places where we otherwise would not have found them again.

With this rapidly growing field of migration research, we will finally unlock some of the secrets of migration timing that have eluded scientists for decades. We can also use this new information to conserve migratory birds, for example by better timing our own activities to provide safer passage for the billions of migratory birds that pass through our skies each spring and fall.

Among all birds, migratory species are declining the most rapidly, likely due to the vast distances they travel each year, thus the greater extent of environmental change that they must navigate. With current conditions favouring shorter migratory movements and some populations losing migration altogether, migration behaviour itself may even be at risk of being lost.

If migratory species continue to decline, or migration disappears altogether, what do we stand to lose? For one, we would lose the important ecosystem services that birds perform across their broad ranges, including the control of insects on our crops and in our forests, as well as pollination and the dispersal of seeds. Birdwatching is also a major pastime in Canada and beyond, providing pleasure to millions and contributing billions of dollars to North American economies. Lastly, we would risk losing one of the most fascinating and inspiring of natural phenomena: migration. Hopefully, we can save time for migrants in our collective futures.

Dr. Kevin Fraser (Twitter: @KevinCFraser) is an Assistant Professor in the Department of Biological Sciences at the University of Manitoba, Winnipeg, and a former Liber Ero Fellow. He studies the migration ecology and conservation of migratory birds and other animals. The Liber Ero Fellowship Program supports early-career scientists working to improve the conservation of Canada’s wild places and natural resources. Follow them on Twitter.