Canadian climber Pascale Marceau is believed to be the first woman to climb a major subarctic peak in winter
By Alexandra Pope
March 14, 2019

Just hours before they summited Mt. Wood on March 11, completing the first winter ascent of the mountain in Yukon’s Kluane National Park and Reserve, Lonnie Dupre and Pascale Marceau had decided to end their expedition and return to their base camp.

The duo had attempted to reach the summit — the sixth-highest peak in Canada at 4,860 metres — the previous day, but were forced to turn around as howling winds reduced visibility to near zero. That night at their high camp, Marceau says, she broke down crying as she and Dupre weighed their options in the face of a stormy forecast. In January 2018, extreme cold and problems with the vapour barriers in their sleeping bags forced the pair to abandon a climb of Mt. Steele, Canada’s fifth-highest peak, also in Kluane. This year, they were properly geared up, but it seemed as though the weather was once again going to have the last word.

“We felt this whole rollercoaster of emotions, because you go for the summit, and it looks so beautiful and it’s getting so close, and you start to think ‘Oh my God, we’re going to get this,’ and then the weather just goes boom,” says Marceau. 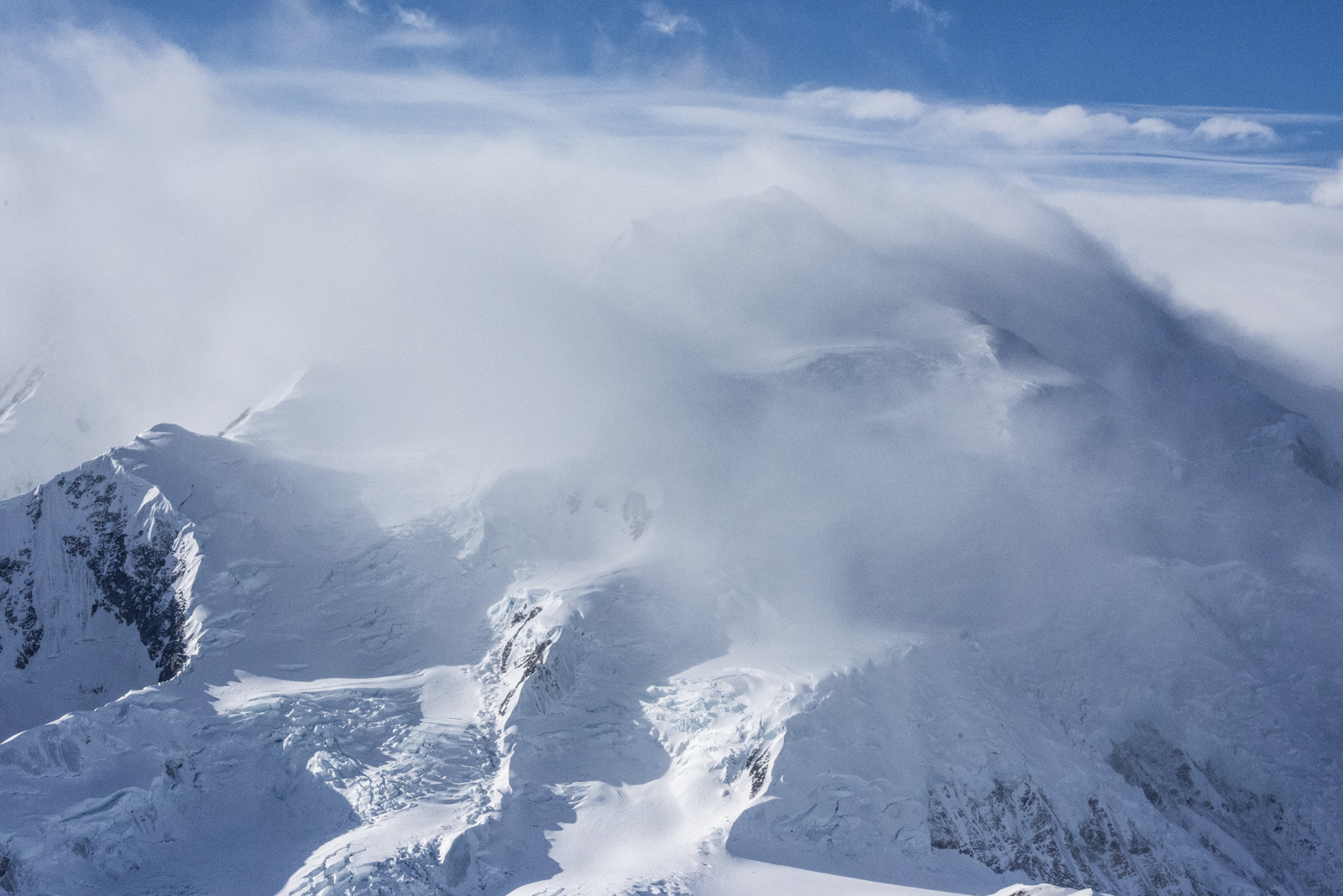 They spent the following morning breaking camp, but then, just as they were beginning to start down the mountain with full packs, the skies cleared and the winds died down. Even then, the decision to make another press for the summit was not an easy one.

“We deliberated more than usual,” says Marceau. “It was risky because we knew we might get turned around again, and then we’d be playing a really dicey game of trying to get back down to base camp safely.” Ultimately, they decided to go for it, and with Dupre looking over his shoulder every few minutes to gauge the mood of the clouds, they reached the summit just after 3 p.m.

There, they stood on a mound of wind-carved snow and ice, drinking in the view, for just a few moments before the cold, the wind and the late hour drove them back down. “We did our high-five celebrations at base camp later,” laughs Marceau. 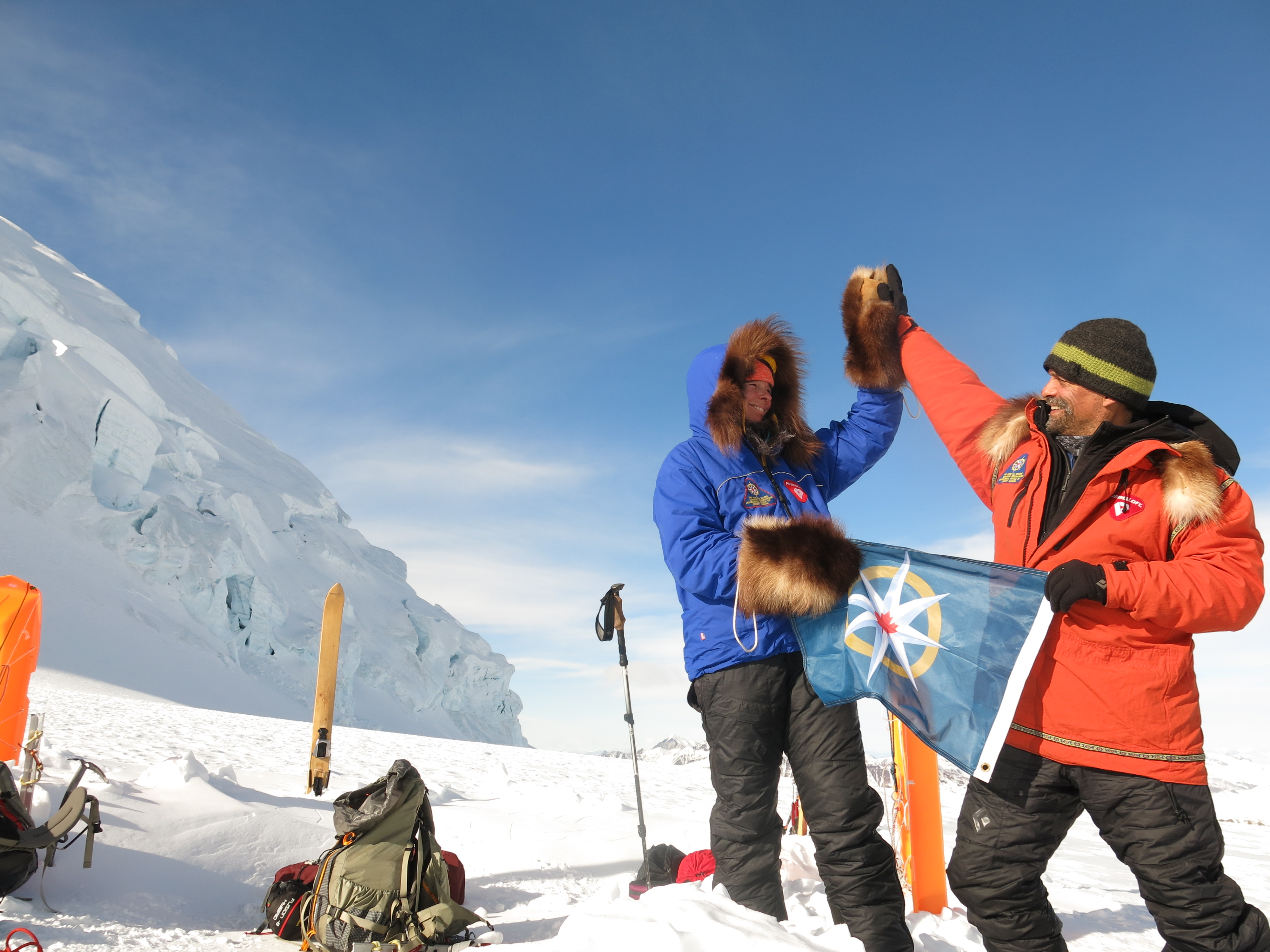 Safe back at base camp, Marceau and Dupre celebrate their success while holding the flag of The Royal Canadian Geographical Society.

For the Canadian Marceau, victory is extra sweet: this is believed to be the first recorded ascent by a woman of a major subarctic peak in winter. “Women have done winter climbs in the Himalayas, closer to the equator, but as far as I have been able to confirm, no female has ever been up one of these high-latitude, high-altitude peaks in the winter,” she says.

With Mt. Wood under their belt, Dupre and Marceau have not ruled out a future attempt to summit Mt. Lucania in the winter. A first winter ascent of Lucania was the original goal of their 2018 expedition, supported by The Royal Canadian Geographical Society, and the 5,240-metre peak was a contender for this year’s climb, but deep crevasses in the icefields at the base of the mountain have made it impossible to find safe landing spots two years running.

For Dupre, an American and 30-year veteran of polar exploration and mountaineering who turns 58 next month, part of the appeal of winter climbing lies in the challenge and unpredictability.

“Everything takes two to three times longer in the winter, and it places a lot of stress on your body and mind, but I’ll soon forget the hardships we just went through,” he says. “As long as my body and my love of the mountains hold out, I can see us going back next February or March and giving it another try.”

As for Marceau, she hopes her accomplishment inspires more women to try winter mountaineering. “You have to like winter,” she says, “but get yourself some good gear and mentors and talk to some people about the tricks of winter climbing and give it a try.

“There’s more out there still to be climbed, so let’s go get ‘er.”