“Burning libraries:” The race to save Canada’s coastal archaeological sites before they’re washed away | Canadian Geographic

“Burning libraries:” The race to save Canada’s coastal archaeological sites before they’re washed away

As sea level rise and the accelerating pace of coastal erosion threaten cultural heritage around the world, Canada has a lot to lose
By Matthew Betts
June 27, 2019

It’s low tide, and my archaeological team and I are weaving between boulders as we hike along one of Nova Scotia’s most beautiful coastlines. Our destination is a rocky headland in Barrington Bay, on the province’s southeastern tip, supposed to be the location of an ancient Mi’kmaw archaeological site, a shell midden, that could be up to 2,500 years old. It was discovered and recorded in 1973 by archaeologist Caroline Bower, who was conducting a survey for the Canadian Museum of History. She described it as an intact layer of dark black soil out of which artifacts, clam shells, and animal bones had spilled, the result of coastal erosion which had recently started to dismantle the site.

Sites of this age, located right on the coast, are relatively rare in Nova Scotia, and our archaeological team is excited to explore and map it. From a distance, we can see that the headland is very exposed to the ocean and now consists of a jumble of large boulders covered by a thin soil layer and a few large pines. Given the dynamic nature of the coastline, we’re not sure if we’ll find the site still intact, but this is undeniably the spot described by Bower — the “x” on her map corresponds precisely to our GPS-determined location.

As we approach the site, our team fans out in a standard “survey” formation. We walk slowly up the beach for several hundred metres, then turn around and hike back, much like you would mow a lawn. We’re looking for any trace of ancient human activity: flakes of stone, pottery, animal bones, charcoal, or shells.

We walk back and forth, back and forth, for more than an hour. Beyond the active shoreline, we spot test with soil probes, hoping to find evidence of buried shell or soil layers. But there is nothing cultural left — no signs that humans were ever here. In the 46 years since the site was discovered, it has been washed away by the waves. 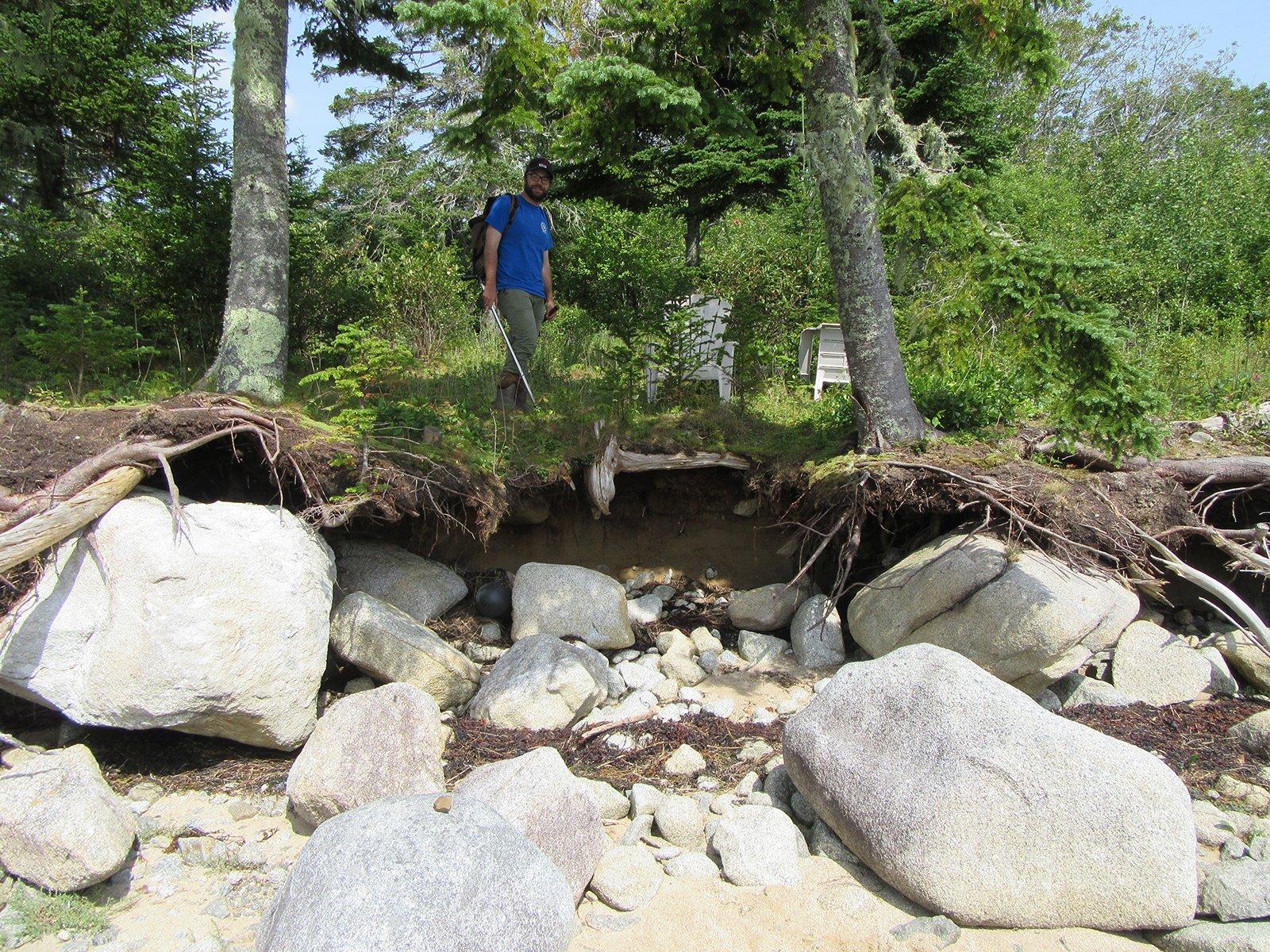 A former shell midden in Barrington Bay, Nova Scotia. Erosion has completely destroyed the site, and no evidence that an archaeological site had ever been here could be located. (Photo: Matthew Betts)

Unfortunately, this is an all too common experience in our line of work. Of the 21 known coastal sites we visited in the summer of 2017, more than 90 per cent of them had been effectively destroyed by erosion. The destruction of archaeological deposits is an issue affecting all the world’s coastlines, and it has recently been characterized as global heritage crisis.

With the longest coastline in the world, Canada has a lot to lose in this archaeological catastrophe. It has been compared to the fire at the Great Library of Alexandria, except in this case, there are literally tens of thousands of libraries at risk. Some international projects have even adopted “burning libraries” as their working titles.

A hard realization for archaeologists and those engaged in preserving Canadian heritage is that important parts of our history have been lost forever. For Indigenous peoples, the potential loss is a social, political, and even an economic issue. Gaps in their history notwithstanding, in many countries, including Canada, Indigenous peoples deploy archaeology to provide evidence of long-term and recurring use of lands and resources. The loss of archaeological sites therefore has the potential to impact their ability to pursue and maintain land and resource rights. In many places, the erosion of Indigenous sites literally means the erosion of Indigenous rights.

While Canadian archaeologists have known about the erosion issue for over 100 years, they have become alarmed by the accelerating pace of erosion over the last several decades. Recognizing the increasing impact of sea-level rise, the Canadian Museum of History recently held a symposium and workshop to brainstorm this very issue, with experts from universities, governments, and Indigenous communities. The consensus of the experts was that all of Canada’s coastlines are severely affected, and we must act rapidly to preserve what is left. They indicated a collaborative program is needed, one that responds to Indigenous community concerns and to the needs of historians and scientists — perhaps a type of funding program that could be accessible to all levels of government, academic, and community institutions. The workshop agreed that the focus must be on triage and salvage of threatened archaeological materials before they are irrevocably lost.

We are hopeful that a project can be developed, and the Canadian Museum of History is exploring how partners might come together to achieve this. We have started putting together an advisory committee and we are currently seeking partners with the mandate and resources to help address the issue. In the coming months we will, with our advisors, develop a proposal for a funding project, the first step towards addressing this national crisis. In the meantime, we are continuing our work in Nova Scotia, where we are developing collaboratively managed models to salvage archaeological sites with our Mi’kmaq and provincial partners. Together, we will continue to walk the beaches of southwestern Nova Scotia, to assess and to collectively make decisions about how we can record, salvage, and monitor what remains.

Dr. Matthew Betts has been the Curator of Eastern Archaeology at the Canadian Museum of History since 2007. For the last decade, he has explored the archaeological history of the Mi’kmaq with Indigenous partners in Nova Scotia.