“Photography furnishes evidence,” Susan Sontag wrote in On Photography. “Something we hear about, but doubt, seems proven when we're shown a photograph of it.”

In our highly connected age, when it can be difficult to tell the “fake news” from the real, photojournalism is all the more important for the stories it is able to tell about human cruelty, resilience, passion and prejudice.

Now in its 61st year, the World Press Photo Contest recognizes the best in photojournalism from the previous year. Prizes are awarded for the best single image or series of images depicting people, nature, sports, general news, spot news and contemporary issues. This year, the judges reviewed more than 73,000 entries by 4,548 different photographers from 125 countries. World Press Photo of the Year was awarded to Venezuelan photographer Ronaldo Schemidt for his photo of a protestor who caught fire while demonstrating against Venezuelan president Nicolas Maduro on May 3, 2017.

The 2018 contest featured a new category, Environment, documenting the impact, positive or negative, of human activity on the planet. South African photographer Neil Aldridge won first place in the Environment - Singles category for his photo of a southern white rhinoceros awaiting release into the Okavango Delta in Botswana, while Dutch photographer Kadir van Lohuizen won first place in the Environment - Stories category for his series Wasteland, depicting how different countries around the world manage their waste.

One Canadian was among the winners this year. Kevin Frayer, a Pulitzer Prize-winning photojournalist known for his wartime work in the Middle East, won second place in the General News - Stories category for his images depicting Rohingya Muslim refugees fleeing persecution in Myanmar.

From July 20 to August 12, the winning images will be exhibited in the Barney Danson Theatre at the Canadian War Museum, the first of four Canadian stops on the contest’s world tour.

“World Press Photo – Exhibition 2018 is a dramatic overview of the year’s most newsworthy events and human experiences,” says Caroline Dromaguet, Acting Director General of the Canadian War Museum. “We are honoured to present this display of the world’s best photojournalism for an 11th consecutive year.”

Here’s a look at some of this year’s winning images. 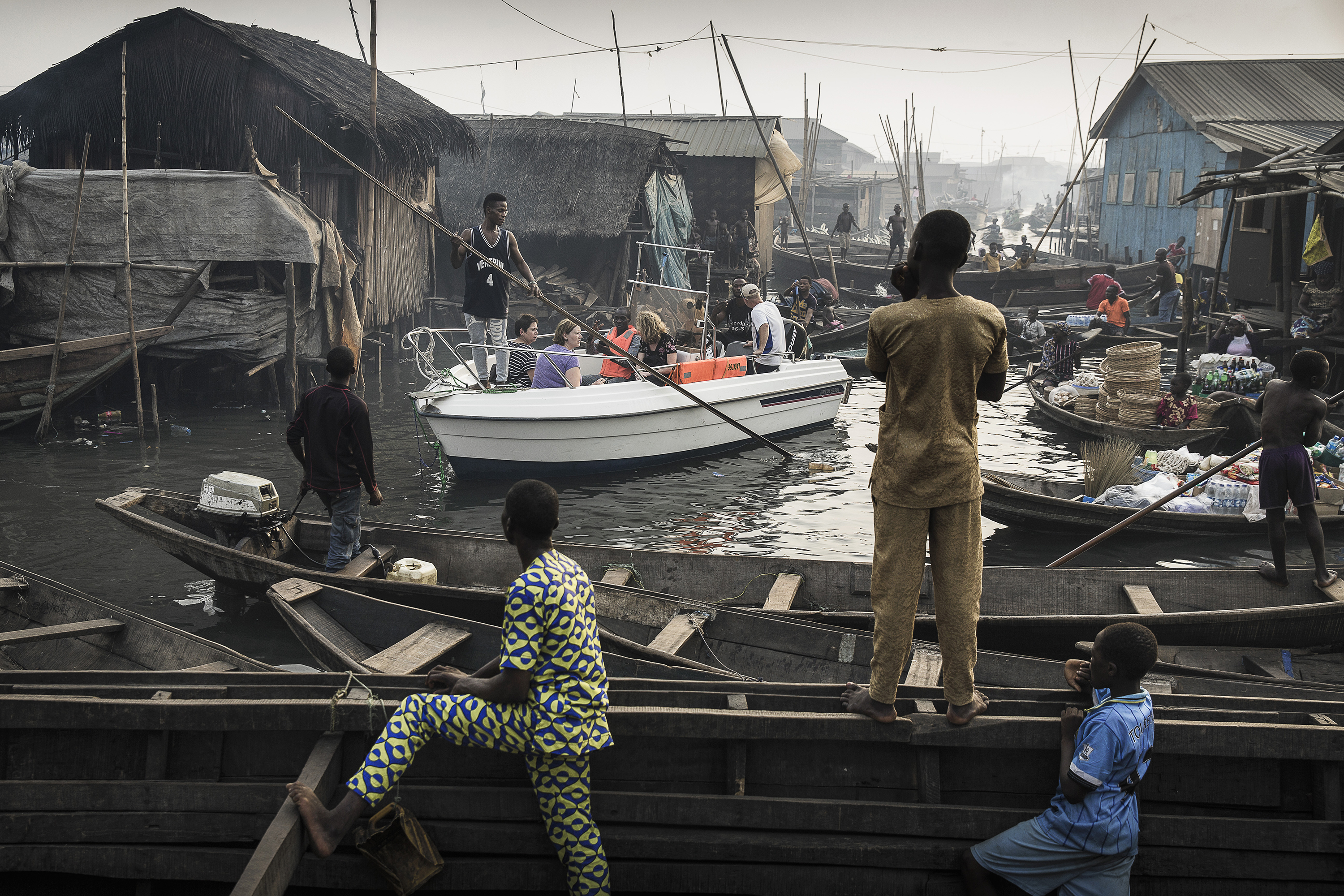 A boat with tourists from Lagos Marina is steered through the canals of the Makoko community—an ancient fishing village that has grown into an enormous informal settlement—on the shores of Lagos Lagoon, Lagos, Nigeria. Makoko has a population of around 150,000 people, many of whose families have been there for generations. But Lagos is growing rapidly, and ground to build on is in high demand. Prime real estate along the lagoon waterfront is scarce, and there are moves to demolish communities such as Makoko and build apartment blocks: accommodation for the wealthy. (Photo: Jesco Denzel, Germany, Laif) 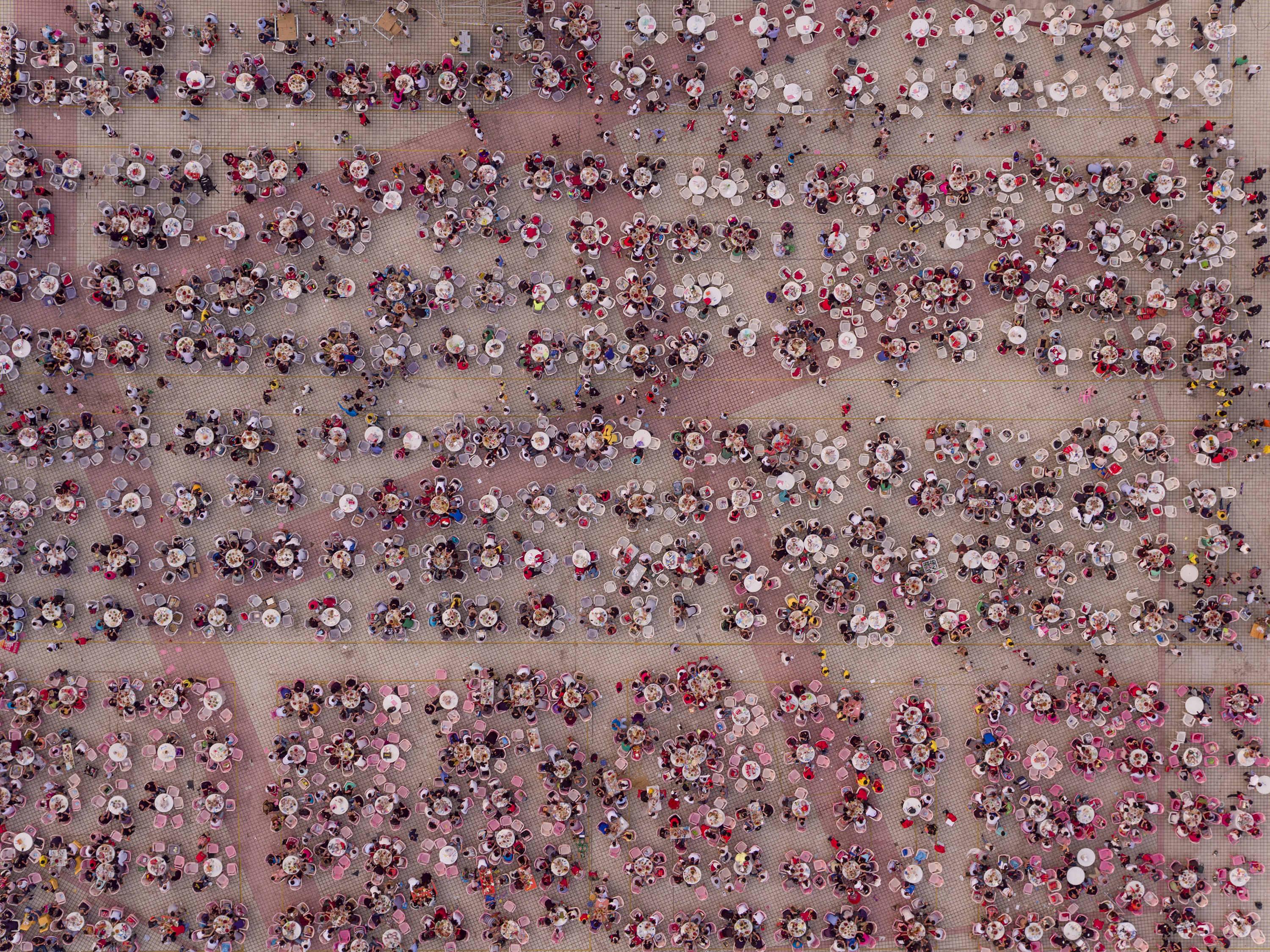 Thousands of people converge on Xuyi County, in the eastern province of Jiangsu, China for an annual crayfish festival. Rapidly rising incomes in China have led to a changing diet and increasing demand for meat, dairy and processed foods. China needs to make use of some 12 percent of the world’s arable land to feed nearly 19 per cent of the global population. New technologies and agricultural reform offer a partial solution, but problems remain as farmers and the young flock to work in cities, leaving an aging rural population, and as land becomes contaminated by industry. (Photo: George Steinmetz for National Geographic) 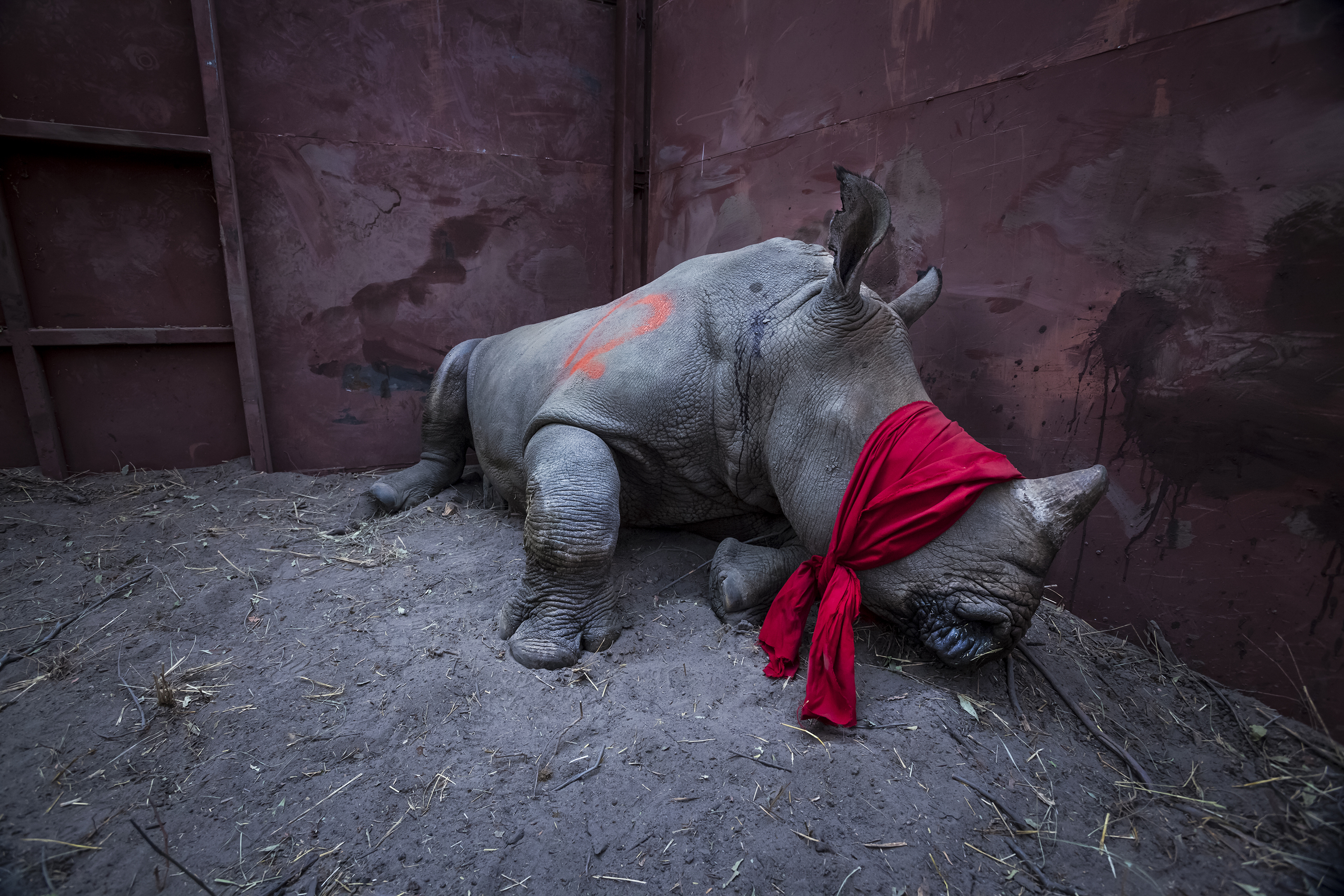 A young southern white rhinoceros, drugged and blindfolded, is about to be released into the wild in Okavango Delta, Botswana, after its relocation from South Africa for protection from poachers. Southern white rhinos are classified as ‘near threatened’. Rhinoceros horn is highly prized, especially in Vietnam and China, for its perceived medicinal properties, and in places is used as a recreational drug. Horns can fetch between €20,000 and €50,000 per kilogram. Poaching in South Africa rose from 13 rhinos a year in 2007 to a peak of 1,215 in 2014, and although these figures have declined slightly since then, losses are still unsustainable. Botswana is saving rhinos from poaching hotspots in South Africa and re-establishing populations in its own wildlife sanctuaries. (Photo: Neil Aldridge, South Africa) 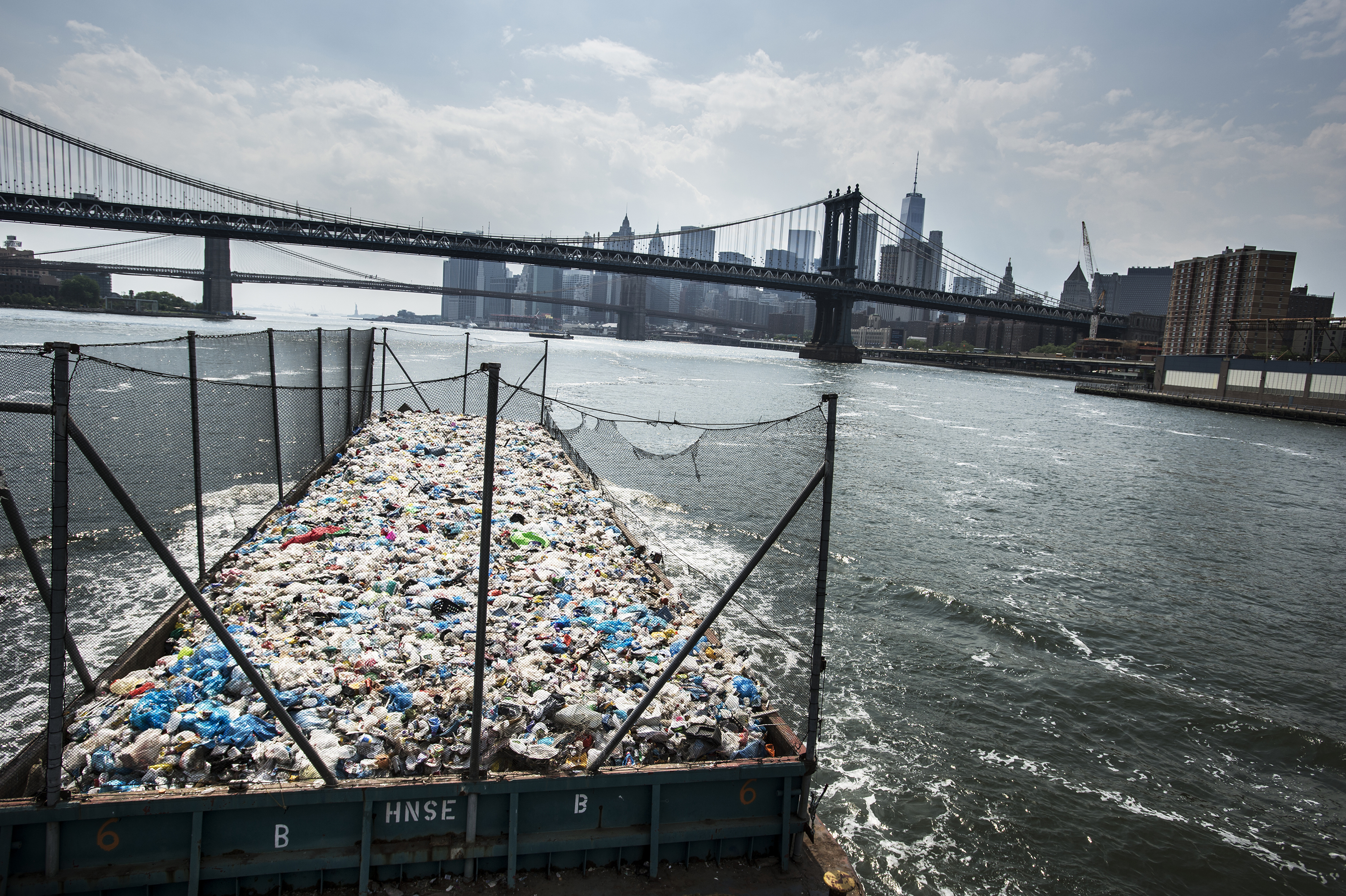 A barge with more than 300 tonnes of mainly plastic is on its way from the Bronx to a recycling plant in Brooklyn, New York, USA. Until the mid-1990s, New York’s primary method of disposing of waste was to dump it at sea. Humans are producing more waste than ever before. According to research by the World Bank, the world generates 3.5 million tonnes of solid waste a day, ten times the amount of a century ago. (Photo: Kadir van Lohuizen, the Netherlands, NOOR Images) 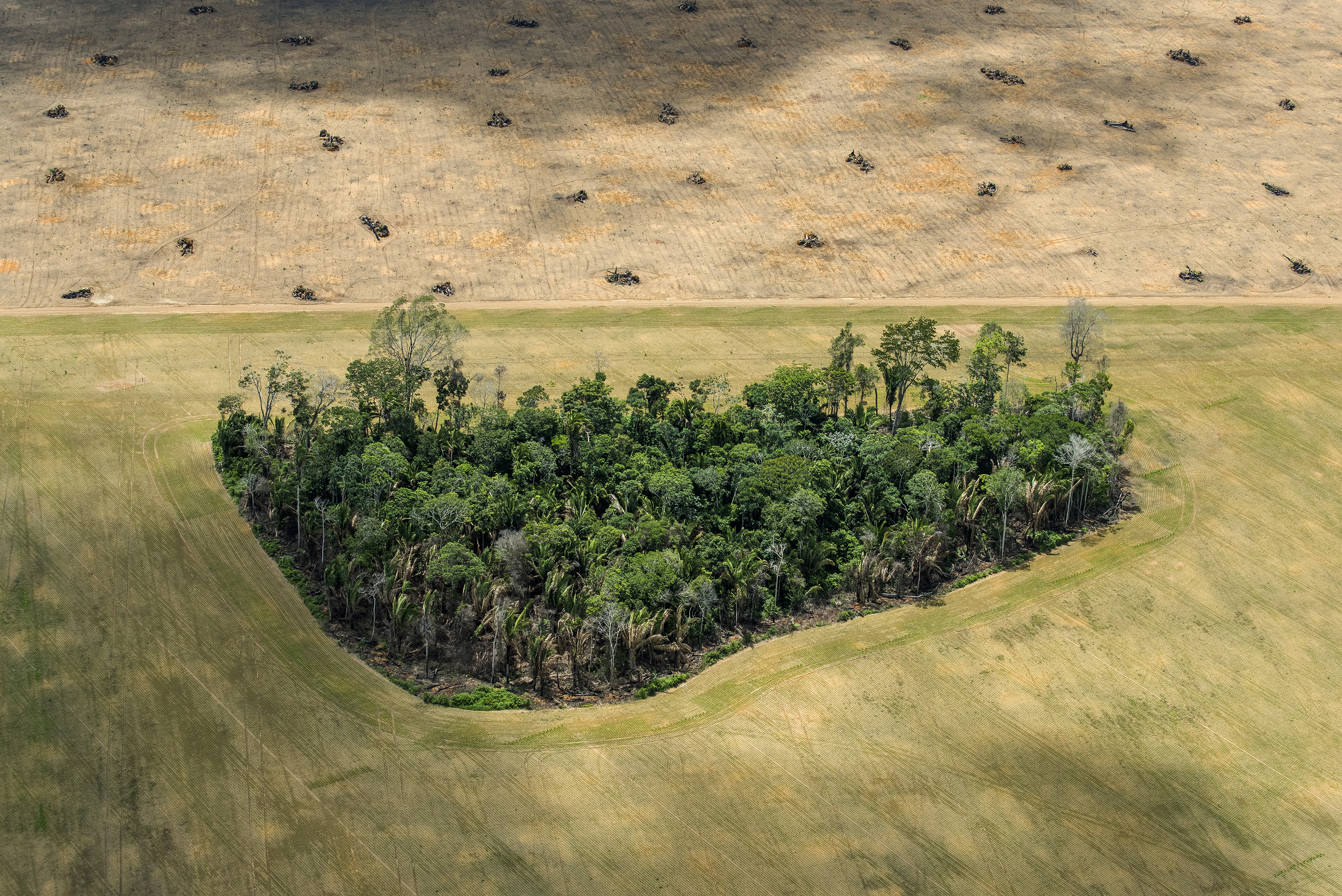 A remnant of rainforest stands in fields cleared for agriculture, near the Tapajós River, Brazilian Amazon. After declining from major peaks in 1995 and 2004, the rate of deforestation in the Brazilian Amazon increased sharply in 2016, under pressure from logging, mining, agriculture and hydropower developments. The Amazon forest is one of Earth’s great ‘carbon sinks,’ absorbing billions of tonnes of carbon dioxide each year and acting as a climate regulator. Without it, the world’s ability to lock up carbon would be reduced, compounding the effects of global warming. (Photo: Daniel Beltra, United States) 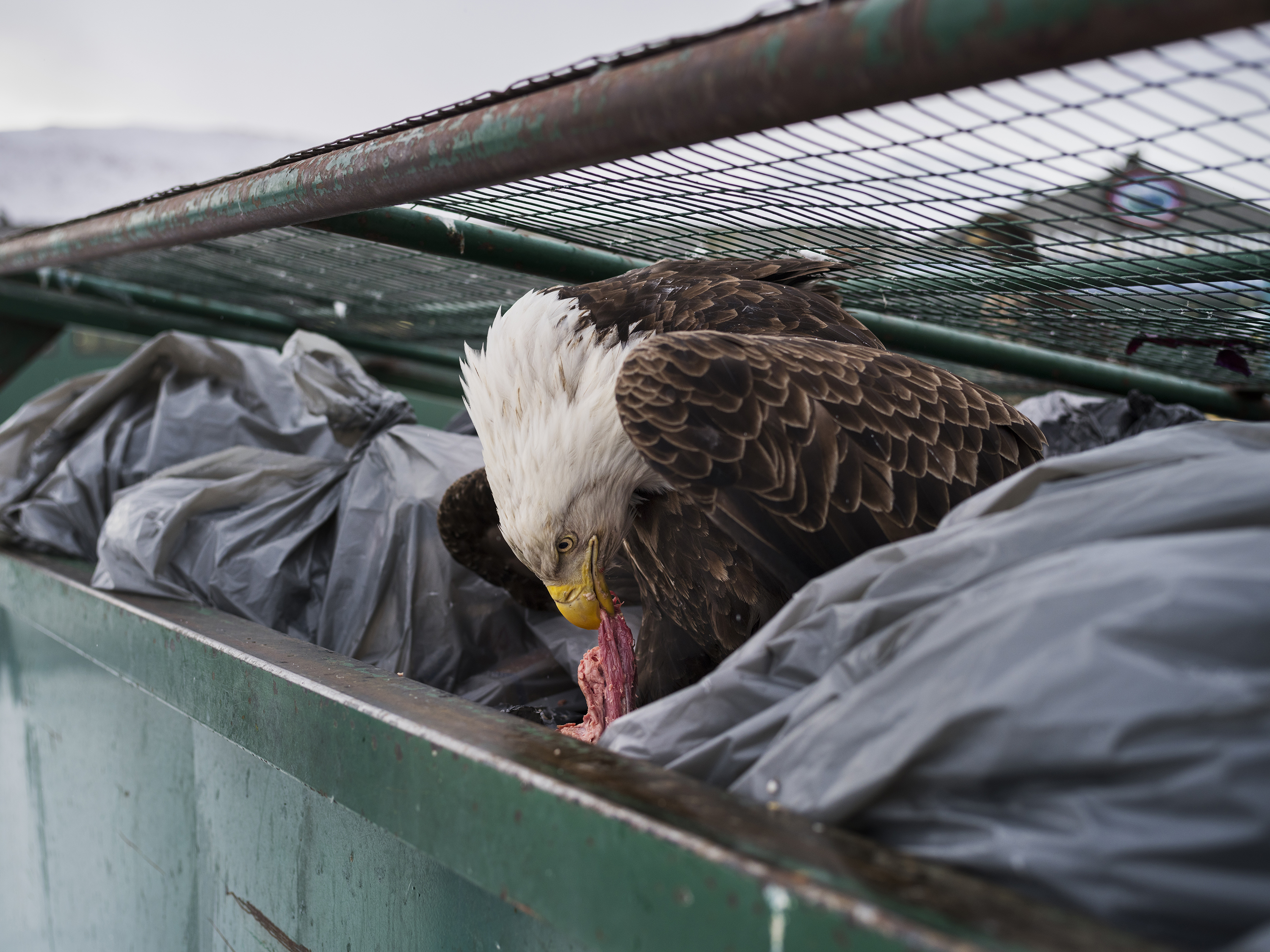 A bald eagle feasts on meat scraps in the garbage bins of a supermarket in Dutch Harbor, Alaska, USA. Once close to extinction, the bald eagle has made a massive comeback after concerted conservation efforts. Unalaska has a population of around 5,000 people, and 500 eagles. Some 350 million kilograms of fish are landed in Dutch Harbor annually. The birds are attracted by the trawlers, but also feed on garbage and snatch grocery bags from the hands of unsuspecting pedestrians. Locally, the American national bird is known as the ‘Dutch Harbor pigeon.’ (Photo: Corey Arnold, United States) 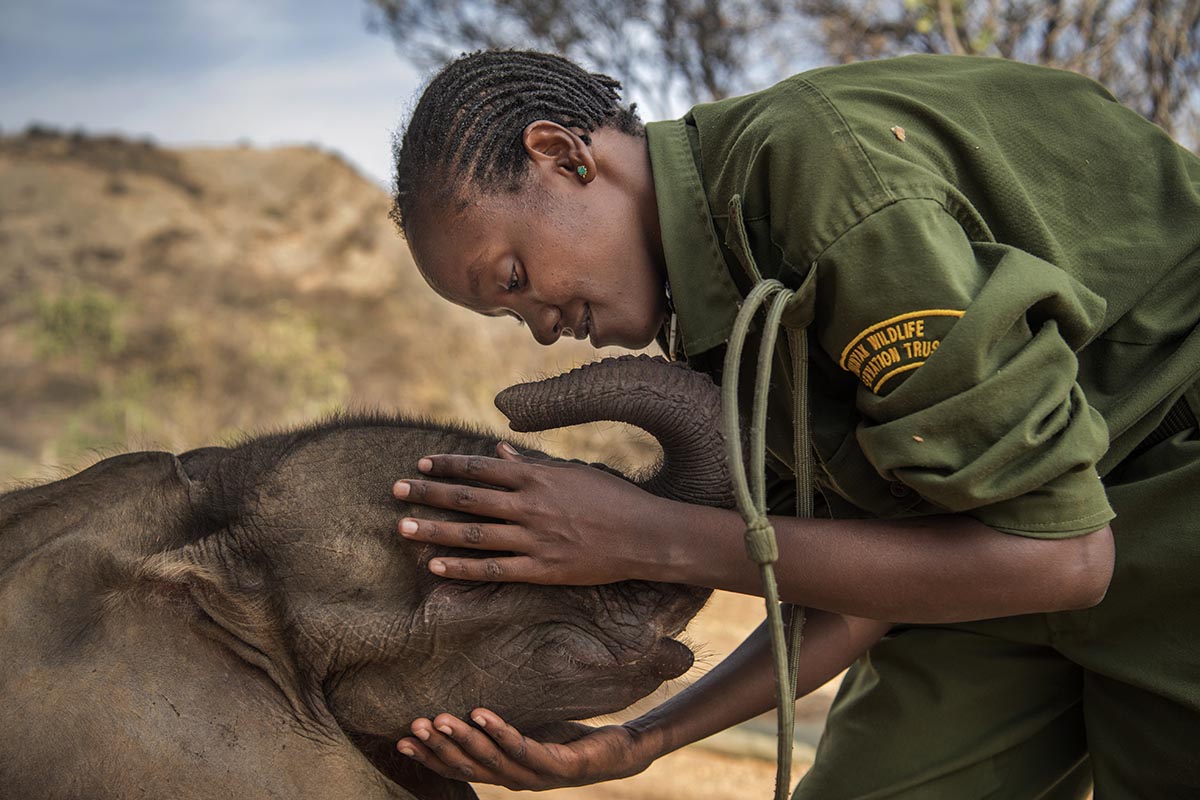 Mary Lengees, one of the first female keepers at the Reteti Elephant Sanctuary in northern Kenya, caresses Suyian, the sanctuary’s first resident, who was rescued in 2016, when she was just four weeks old. Women at Reteti are seen as bringing important nurturing skills into the workforce. (Photo: Ami Vitale for National Geographic) 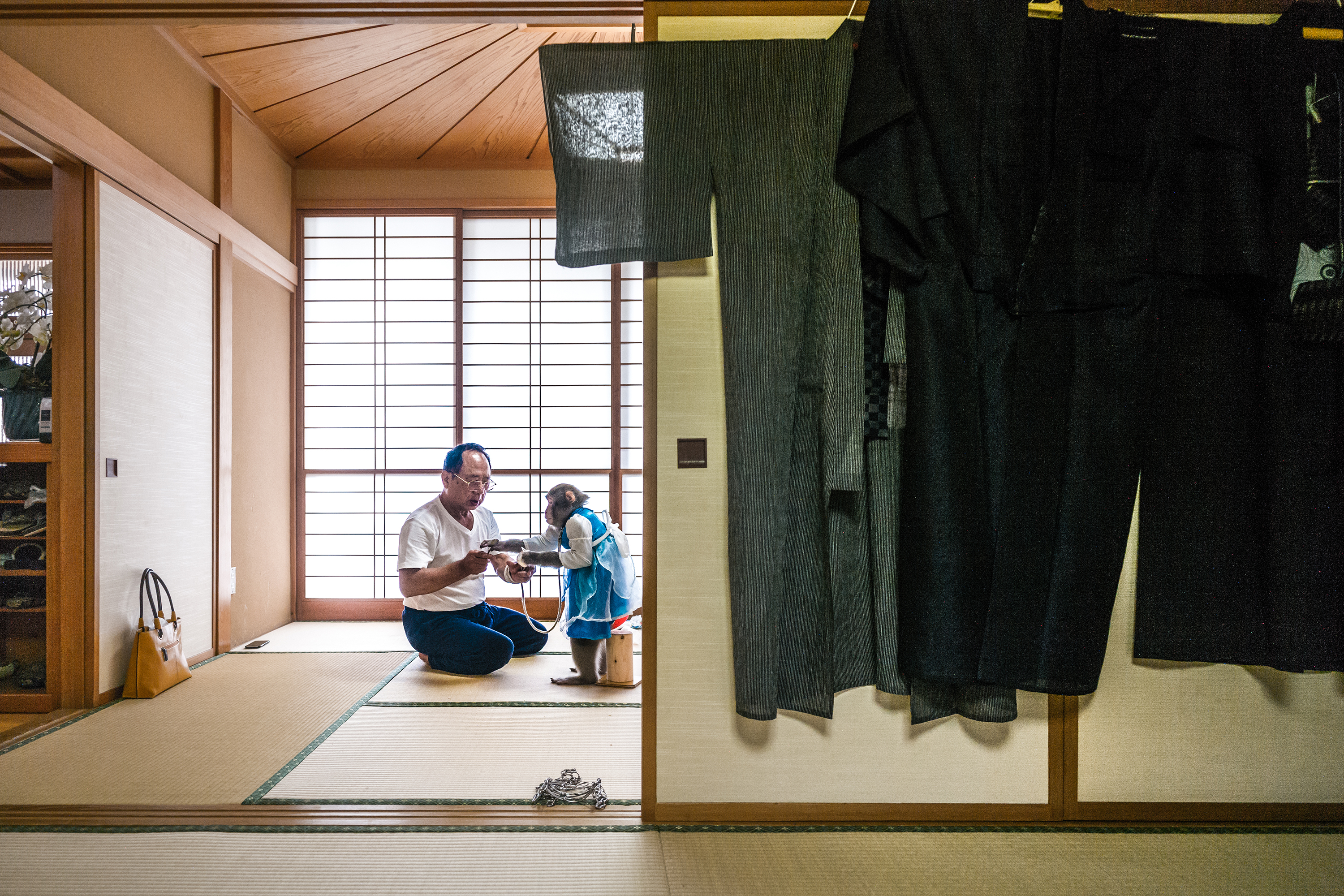 Kaoru Amagai shares his home in Ōta-shi, Gunma, central Japan, with three macaques, which he treats as he would children. In recent years, the Japanese macaque, best known as the snow monkey, has become habituated to humans. As the range of the macaque habitat expands from mountain areas to subalpine and lowland regions, the animals have lost their fear, have taken to raiding crops, and are often seen as pests. Despite macaques being officially protected in Japan since 1947, some local laws allow them to be tamed and trained for the entertainment industry. Once considered sacred mediators between gods and humans, monkeys in Japan also came to be seen as representing dislikable humans, deserving of ridicule. Commercial entertainment involving monkeys has existed in Japan for over 1,000 years. (Photo: Jasper Doest, the Netherlands) 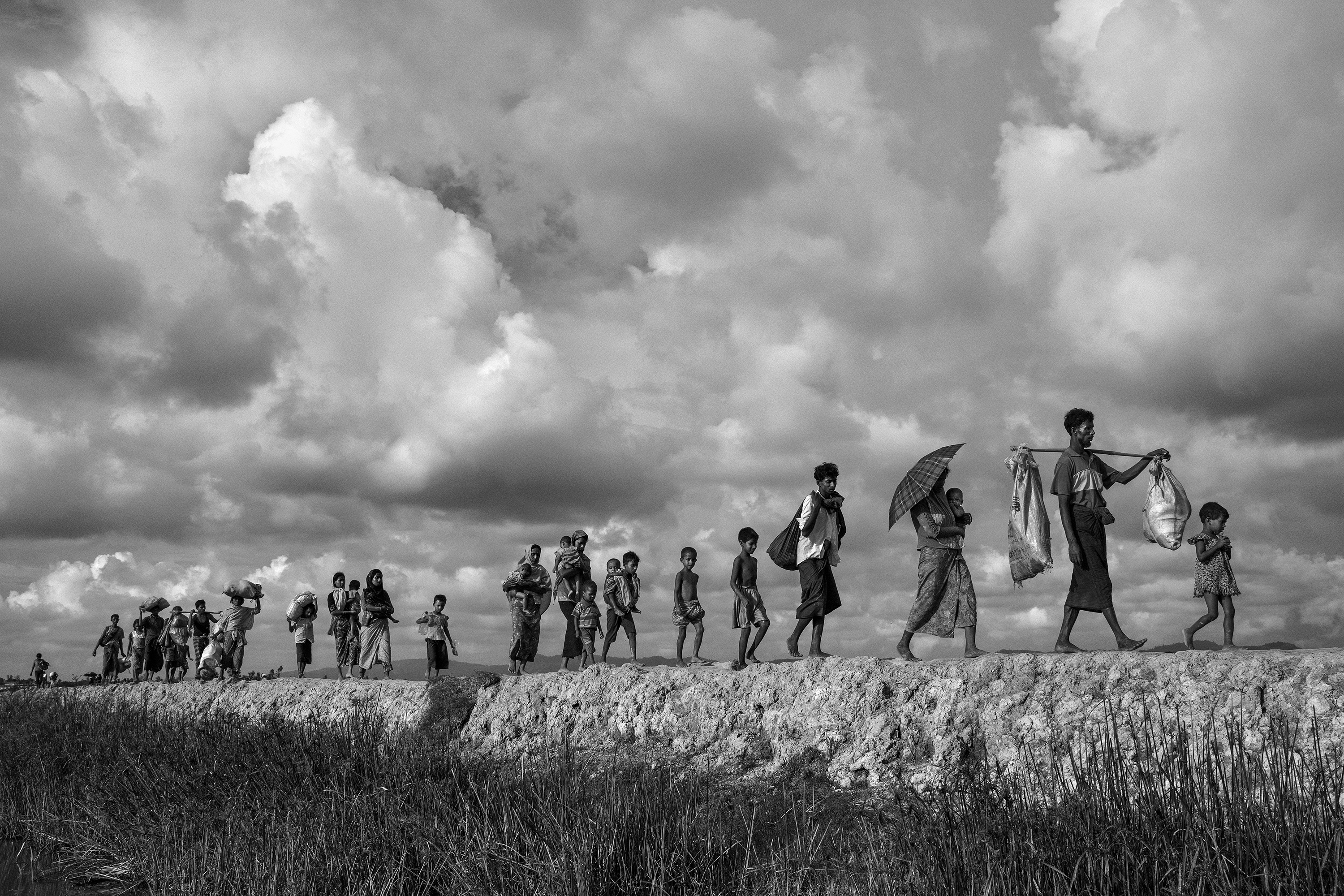 Rohingya refugees carry their belongings as they walk on the Bangladesh side of the Naf River after fleeing Myanmar. Attacks on the villages of Rohingya Muslims in Myanmar, and the burning of their homes, led to hundreds of thousands of refugees fleeing into Bangladesh on foot or by boat. Many died in the attempt. According to UNICEF, more than half of those fleeing were children. (Photo: Kevin Frayer, Canada, Getty Images) 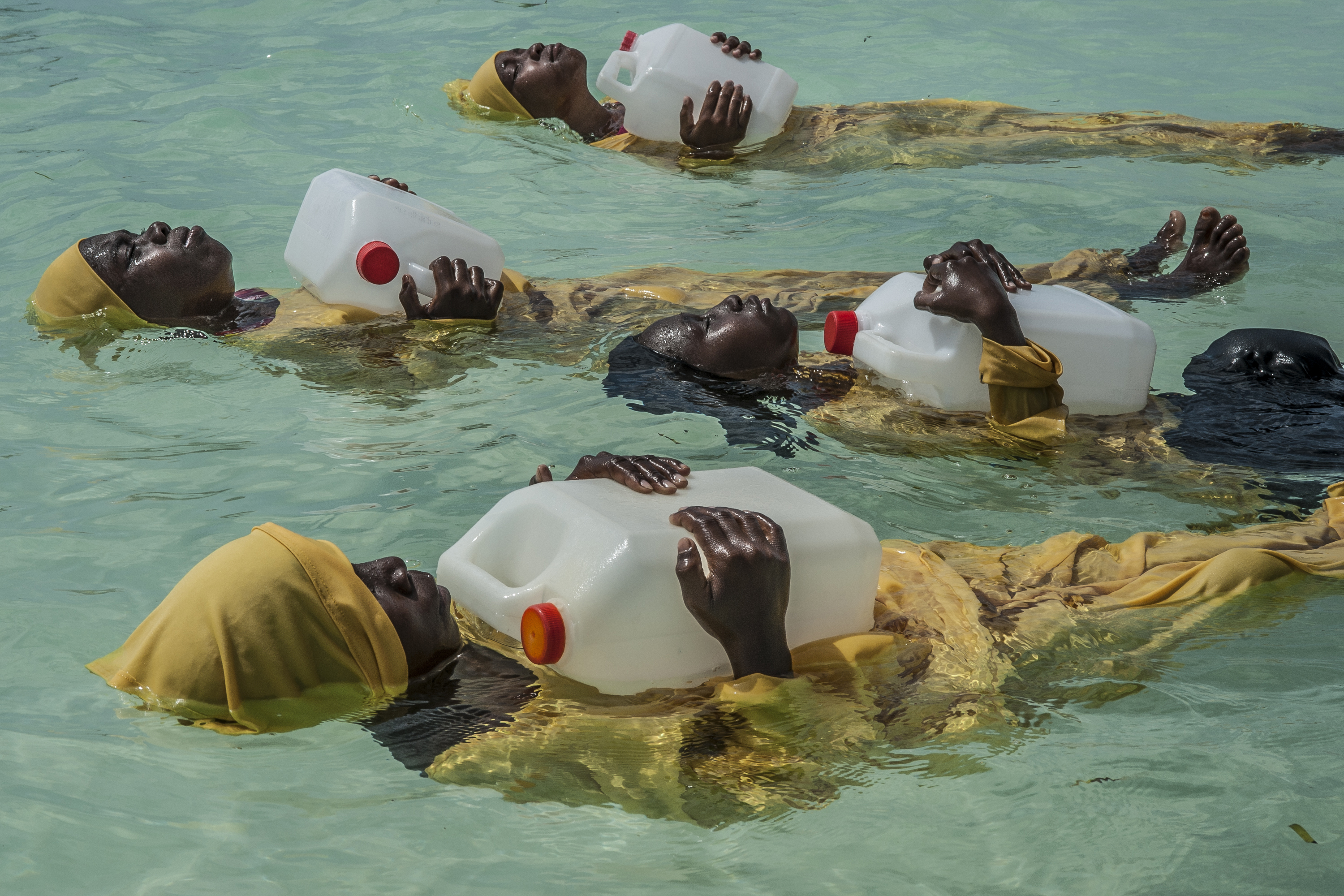 Students from the Kijini Primary School learn to swim and perform rescues in the Indian Ocean off Muyuni Beach, Zanzibar. Traditionally, girls in the Zanzibar Archipelago are discouraged from learning how to swim, largely because of the strictures of a conservative Islamic culture and the absence of modest swimwear. But in villages on the northern tip of Zanzibar, the Panje Project (panje translates as ‘big fish’) is providing opportunities for local women and girls to learn swimming skills in full-length swimsuits, so that they can enter the water without compromising their cultural or religious beliefs. (Photo: Anna Boyiazis, United States) 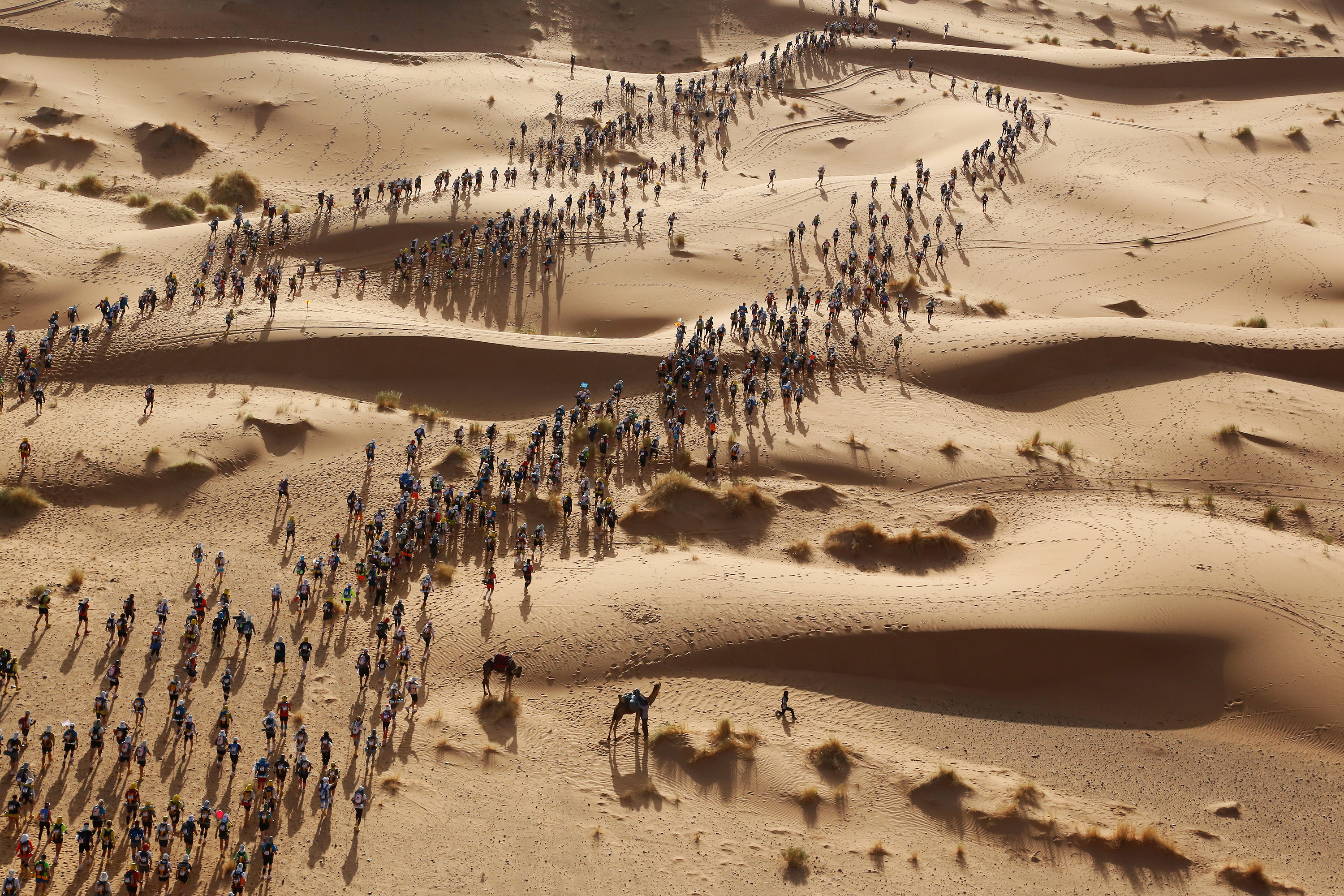 Participants set off on a timed stage of the Marathon des Sables, in the Sahara Desert in southern Morocco. The Marathon des Sables (Marathon of the Sands) is run over 250 kilometres in temperatures of up to 50℃. Participating runners and walkers must carry their own backpacks with food, sleeping gear, and other material. The marathon is conducted in six stages, over seven days, with one long stage of more than 80 kilometers. The first Marathon des Sables was held in 1986 with 186 competitors. The event now attracts more than 1,000 participants from around 50 countries. (Photo: Erik Sampers, France)